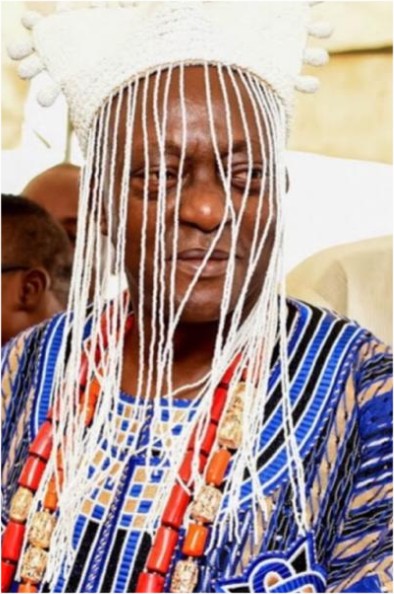 •Details Of His 60 Minutes Interview

As part of our ongoing visitations to prominent Nigerians around the country, to mark its 25th anniversary, City People visited HRM Oba Saburee Babajide Bakre at his palace in Abeokuta. Kabiyeesi received us in company of some of his chiefs.

He commended the Management of City People for sustaining the magazine over the last 25 years and prayed for many more years. He told the team led by the Publisher, Seye Kehinde Chat, he has always been an ardent fan of City People.

“You people chopped my money years back when I was in Lagos, because I was always buying your magazine every week. There is no way I will start my week without getting my copy to catch up with all those juicy stories”.

It was after his preliminary remarks that he granted our request for an interview. He was excited in talking about his transition from Beret to the crown.

How has it been since he settled in as the “Agura” and what has been his experience, we asked him. “I thank God Almighty, it has been alright. I am still good to go, at least I am serving my people. It has been a little bit difficult due to the sudden change. But all the way I thank God”.

What areas is he looking at in terms of his contributions to the improvement of Gbagura?

“It is unfortunate that since I settled in it has been one thing or the other. Immediately after my coronation, the pandemic started, so we have been unable to move. I have a lot of friends willing to contribute to Gbagura’s development like giving schools scholarship. For example, I have a friend that started the mission 5.5.5 that is 5 scholarship for senior secondary school and tertiary schools. I have some friends who donated some boreholes. I was also given an hospital that will be handed over to the Federal Medical Centre, it was donated by NNPC.

We also have the palace under renovation so despite the pandemic we are still up to something.

Looking at the position of Agura, out of the four stands in Egbaland, Gbagura has been stated the fourth pillar. What do you feel about that?

I feel cool with it, it is alright and that is how we met. All I know is that “Owo kan o gbe iberi” as my people say. The four of us need cooperation. Like Obasanjo said during my coronation that I have to be the bridge and I am doing my best to be. I am very close to the Alake of Egbaland, I am very close to Oshilofo Oke Ona, Baba Oluwo is also like my big Uncle because he grew up in my mother’s family house, the Adegbite’s house so he knows me very well. With God on my side, it will be done. If God says I will be the bridge I will sacrifice anything to be the bridge. Like the other time someone said he wanted to dethrone the Alake of Egbaland. If all four of us were together such people will never rise.

We asked him to tell us the significance of the Gbagura people?

Gbagura people are warriors. That is why we have our people settled at the borders of Abeokuta. In the olden days the Gbagura people were sited at Lafenwa, Alamala, and Oshiele areas.

They guide the borders as warriors. One of the famous warriors was Oluwole Agbo. He was popular because he sacrificed his wife. There was a time during the olden days, the Yorubas, Egbas and Gbaguras waited to settle down together. They made consultations and the gods requested a pregnant woman as the sacrifice. Oluwole Agbo donated his pregnant wife then. The Gbagura people are easy going people and strong but do not offend them. They are loving and generous people”.

What was his growing up years like? Where did he grow up?

I was born in Ibadan, I later came to Abeokuta at age 10 and attended Egba High School, then I attended Ogun State Polytechnic before I joined the Custom service. All along in the service I had my family in Abeokuta so I came to Abeokuta every two weeks to see my father. During the time my father was building Crown Royal Hotel. We stayed in Adigbe, we later got a place opposite crown royal hotel. I will say I grew up in Abeokuta and I know almost everywhere in Abeokuta”.

How did he feel getting crowed as the Agura?

“Well it is my inheritance so there is nothing I can do about it. My grandfather fought for the throne against Adeoshin in 1931. Then in 1961, my father still fought against the son of Adeoshin and lost again. So after the death of the Agura, I only called my Uncle on July 14th, 2019 and he announced the death of the Agura of Gbagura. He said that we have been robbed of the throne a long time and it is our turn. I turned it down and calls kept coming in. I left the custom to get crowned the Agura of Gbagura. I was reluctant at first but I realised it is destiny. I remember some 15-20 years ago, my family and I went to visit the Agura, he gave me 2 beads and I kept them till now. He never told me the significance of the beads”.

What is his message to the Gbagura who are abroad?

READ ALSO: WHY CELEBRITIES ARE BUYING HOUSES FROM DOLLAR CONSTRUCTION IN IBADAN

City People Publisher Visits The AGURA Of GBAGURA was last modified: May 12th, 2021 by Seye Kehinde

Why Celebrities Are Buying Houses From DOLLAR Construction In IBADAN