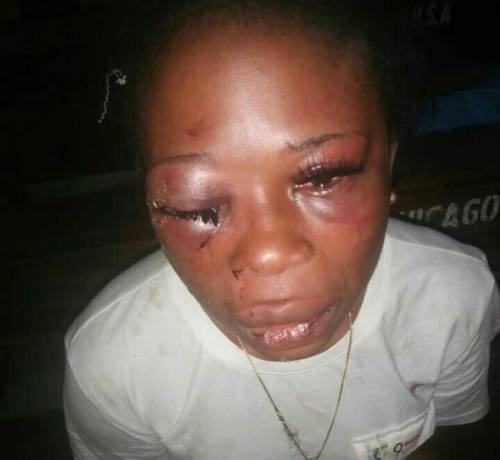 The owner of Club 2M (Mandy’s Place), Agbor, Delta State, Mandy Imahiagbe, and another person have been arrested and detained by the police for inflicting grievous bodily harm on a female staff that almost blinded her eyes.

Our correspondent reliably gathered that trouble started on Sunday when a customer after procuring an item without payment absconded from the night club.

According to an eyewitness, the assaulted female staff known as Precious Omagbibe tried all she could to explain to her boss that she was busy with other customers when she lost sight of the absconded client but it didn’t go down well with Imahiagbe.

The club owner soon physically assaulted Omagbibe and put her in grave danger.

The witness said, “However, all explanations fell on deaf ears as her boss mercilessly threw punches and slaps at her, causing bodily harm on Precious.

“He forcefully dragged Precious into his car after beating her mercilessly, drove her to the police station and laid a report against her.

“After his complaints, the police instructed him to take her for treatment first which he did, but he dropped her at the hospital and left without dropping any money for her treatment.”

Newsmen learnt that after abandoning his female staff at the specialist hospital, the police swung into action to investigate what actually transpired.

It was reliably gathered that on Monday, the police at the area command, Agbor, arrested and detained the club owner and one other person.

Condemning the assault on the female staff in a statement, Director General of rights groups, Behind Bars Human Rights Foundation, Harrison Gwamnishu, called on the Inspector-General of Police, Delta State Attorney-General and Commissioner for Justice, Peter Mrakpor, to order a thorough investigation into the matter.

Gwamnishu said, “Nigeria is currently facing a huge reputation deficit and the entire world is watching to see what will become of us.

“Our choices and actions must mirror that of a serious nation that abhors and punish crimes, whose laws respect no persons nor status. We will ensure the victim gets justice.”

A spokesperson for the police in Delta, DSP Onome Onovwakpoyeya, could not be reached for comments as her mobile phone rang out when our correspondent contacted her.