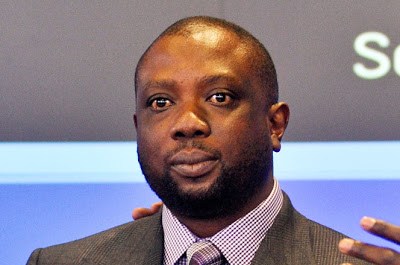 The story of Kola Aluko, an ally to former petroleum minister, Diezani Allison-Maduekwe, who was indicted in a multi-million naira oil fraud, has been told.

He did not just stumble into the bawdy, glitzy world of wealth. He cut a pie of it from birth but never in the dizzying, awe striking station he basks in at the moment. Since he set his eyes on the rainbow from an early age, he has ploughed and plundered through the unlimited vast fields of opportunities, rising like an acorn to a mighty oak, the kind of leap celebrated English writer Charlie Chapman, would call ‘Midas touch’. But it was his dalliance with Diezani Alison Madueke, immediate past petroleum minister that fast-tracked his fairytale life of riches and acclaim.

Kola Aluko, one of nine siblings of a pharmacist mother and Ilesha High Chief  Akanni Aluko, a geologist who is the Chairman of the uppity Island Club  admits  his affluence is not a product of the Freudian “cargo- cult mentality.” He says he was “From an early age very ambitious and I always knew to work for myself.”  Described in many circles as “highly competitive and keen on sports,” Aluko’s entrepreneurial spirit set him to work in different industries, ranging from pharmaceuticals to cars, before finally nestling on the oil industry 25 years ago. In just 47 years of age, and with only a known terminal formal secondary school education obtained at Igbobi College, Lagos,  he has straddled and compressed so much that will take many a lifetime to accomplish.

Emerging as a leading oil business magnate, he forayed further into African infrastructure development and aviation, co- founding Atlantic Energy, an indigenous, private upstream oil and gas company, focused on independent exploration and production (E&P) participation in Nigeria. That was the icing that launched his meteoric rise. On its heels came Besse Oil, a pioneering oil trading company, which he co-founded in 1995. Besse Oil was one of the first to obtain credit lines with major international banks, traded in crude oil and fuel oil, and was also a major importer of gasoline. Six years later, in 2001, he founded Fossil Resources, an indigenous downstream oil, and gas company. Not done with his business dream yet,  Kola Aluko in 2004  floated Exoro Energy International and moved into exploration and production. Exoro Energy partnered with a division of Weatherford, to showcase its exploration and production technology capacity. In 2007, he took another giant step by fusing Exoro Energy with the division of Weatherhead to birth Seven Energy.

He diversified into Aviation in 2010, becoming a member of the Vista Jet advisory board, assisting with the West African expansion of the Swiss-based Luxury Aviation Company. The turning point in his business track came in 2011 with the emergence of Atlantic Oil, a private upstream oil and gas company, which he co-founded with a team of Nigerian and international E& P executives. By this time, he had been weaned and had stealthily shredded his dark horse image.  For evading the limelight for so many years despite his riches, a former minister and elder statesman who prefers not to be named because he is a friend of the father described him as “ a phenomenon.” He told Sunday Sun: “ I wish I can talk. But I have a dilemma.  Let it not be a dog eat dog scenario. I’m a good friend of the father. Everybody knew what was going on. Obasanjo knew. Americans knew. Obasanjo warned Jonathan about this woman; not to appoint her. The whole saga is messy and it has not yet finished. More revelations will come out. It is a systems failure that bought it. “We need to change our systems. Look at the Ibori case. The judge here discharged and acquitted him. It took a judge in the UK to nail him. Look at that of Odili the former Rivers State governor, a judge here granted him perpetual injunction from prosecution and the EFCC (Economic and Financial Crimes Commission) claimed they appealed against it. Look at what is going on now. EFCC cases are being thrown out, anyhow.  Nobody in Nigeria believes a governor, senator or minister can go to jail. Do we bring in judges from Ghana and other Commonwealth countries to try corruption cases? I don’t know. “

The national chairman of the United Progressives Party, UPP, Chief Chekwas Okorie believes that the likes of Aluko are many in the country.  He said: “ If we put our eyes down, there are up to 10 of them since the advent of the oil boom. It is because of the system we are operating. The intelligence gathering mechanism is zero. Money was stashed away at Ikoyi for several years and none of the security agencies detected it. Whatever you say they read politics into it. What should be done now is to fight and recover the stolen money. Do not forget that the former governor of the Central Bank, Emir Sanusi Lamido Sanusi raised the alarm about the missing NNPC billions and was suspended.

“In Nigeria, we have not been serious about loot recovery. If you do some inventory of properties in Nigeria you will discover properties worth trillions of naira that the owners cannot account how they came about them. There is Jide Omokore too, who connived with him and Madueke Diezani.”

“I have the belief that there is no expiry date for corruption cases. This is why I am against some people who accuse Buhari of partiality in his anti-corruption drive. Let him do his bit when another regime comes, it will cover more ground and tackle those that he left out.”

On his part, a former governor of Kaduna State Alhaji Balarabe Musa accused the government of shielding many influential corrupt Nigerians.

“There are many people like Aluko in this country. They parade the corridors of government cutting illegal deals at the detriment of the people. The government knows them but pretend. They cannot be apprehended because the government condones it. The political will is lacking and people do not really see these people as thieves.”

But despite the flaks and how many people perceive him, in and out of the country, he has been riding the crest of interminable glories, amassing global accolades.

Forbes listed him as one of 40 richest Africans, observing for good measure that he was among “ Ten Nigerian  Multi- Millionaires you’ve never heard of” as well as one of  “10 successful Africans to follow on Twitter.”  The BBC (British Broadcasting Corporation) came in tow to rank him as among “100 Most Influential Africans”.  His burgeoning profile just before 2011 became the melting point of his aspirations and the convergence of interests with  Diezani Alison-Madueke.   His company, with the assistance of Diezani and high officials of the NNPC (Nigerian National Petroleum Corporation), beamed its searchlight on under-developed producing fields in Nigeria, partnering with the Nigerian Petroleum Development Company (NPDC). It focused mainly on Niger Delta assets, contracted and executed under Strategic Alliance Agreements (SAAs) with the NPDC). The liaison with Diezani came with sizzling sweetheart deals that are ricocheting and causing stirs; ultimately threatening to send them to jail. Already, the United Kingdom, UK has requested for his extradition to the UK to face multiple money laundering charges to the tune of $1.8billion.

The meeting, blackmail, and parting

Although they have been acquaintances since  Diezani’s  days  at the Dutch oil giant, Shell Development and Oil Producing Company Limited some  two and a half decades ago, they began to forge closer business alliance with the  signing of the SAAs,  which has, however, turned sore, metamorphosing into the biggest catalyst of their travails. To boot, a disappointed and highly exasperated Diezani is fretting, worried that her alleged co- conspirator Aluko has not kept a wholesome behavior, a situation that has laid them bare and vulnerable, threatening to spill the entire beans wholly and vowing to go to jail with them. Her resolve, according to Sunday Sun findings is contained in a recorded conversation recovered by investigators probing the corruption allegations against the former minister. It revealed how the former minister, Aluko and one Jide Omokore laundered millions of dollars on behalf of the former minister, which was used in buying properties in the US and the UK for her family in return for oil contracts to Atlantic Energy Drilling Concepts Nigeria Limited (AEDC), Atlantic Energy Brass Development Ltd (AEBD) and, two shell companies owned by Omokore. In the conversation with Aluko recorded by herself on May 14, 2014, a bitter Diezani owned up to helping them secure the multi – dollar SAAs deals. She was furious at how the ostentatious lifestyle and acquisitions of Aluko might have opened their flanks to prying eyes and instigating law enforcement agencies across the world to investigate their shady deals. She was particularly irked by Aluko’s acquisition of the Galatical Star, an $80million “super yacht”, insisting that renting a yacht for two weeks could have concealed everything and kept the security agents off their back.

Here are some of the excerpts of the conversation as recorded by the ex-minister.

“You and Jide had some of the most support that we could possibly give. At a time when we were not doing anything else, we stuck our necks out regarding the SAA and we supported it….

“Once you start acquiring, acquiring, acquiring at a certain level, then you’ll be – whether you like it or not, whether it was done in the most transparent – you understand? – The manner or not, because they will trace where it came from. This is an age of terrorism.

“If you want to hire a yacht, you lease it for two weeks or whatever. You don’t go and sink funds into it at this time when Nigerian oil and gas sector is under all kinds of watch, as we have been for some time, and where Atlantic (i.e. AEDC and or AEBD) itself has been the subject of all kinds of speculation,” she lamented.

The unfolding development has opened a large vista of the underhand dealings that characterized the reign of Diezani as petroleum minister, orchestrated her ordeal, as well as put a wedge on their sensationally warm  relationship over the years. Expectations are rife that the coming days may see them spew more facts and fresh directions in their messy oil deals.

We’re Currently Living at the Mercy of...

Education: See The European Countries That Give...