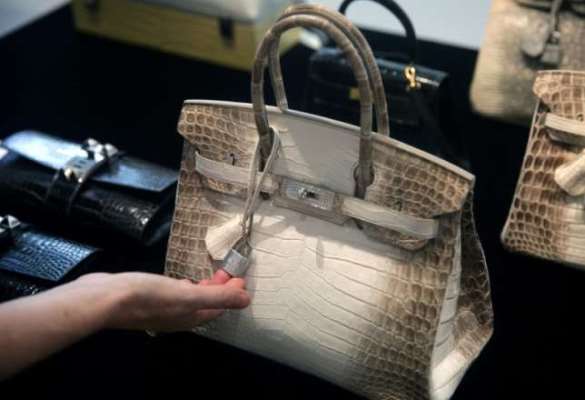 A French luxury label Hermes Handbag has sold at a Hong Kong auction for a whopping N120 million.

A luxury Hermes handbag shattered the world auction record in Hong Kong on Wednesday, fetching an eye-popping $380,000, Christie’s spokeswoman, Gigi Ho said.
The auction house didn’t identify the buyer of the matte white “Himalaya” crocodile skin Hermes Birkin bag. The handbag was produced in 2014 and has 18 karat gold buckles and strap loops encrusted with 205 diamonds.
It fetched 2.94 million Hong Kong dollars ($380,000), which Christie’s says is a record for any handbag sold at auction.
The price flew past the presale estimate of HK 1.5 million to 2 million ($193,000-$258,000) during 10 to 15 minutes of intense bidding in the auction room and on the phone and online buyers, Christie’s spokeswoman Gigi Ho said.
The price surpasses the record set a year ago when Christie’s auctioned a similar Birkin bag for $300,000. It had identical specifications but was produced in 2008.
Christie’s says Himalaya Birkins get their name from the bag’s color, which fades from smoky gray to pearly white, evoking comparisons with the mountain range.
The company says they’re exceptionally rare, with only one or two believed to be made each year because of a time-consuming process to dye the crocodile skin.
The highly coveted bag was created in 1984 by French luxury label Hermes in honor of British singer and actress Jane Birkin. It’s famous for a stratospheric price tag, celebrity owners, and a years-long waiting list.
-NAN
Customer Buys Luxury Hermes Handbag for a Whopping N120 million was last modified: June 1st, 2017 by Arinze Ago

This look at the moon through a...