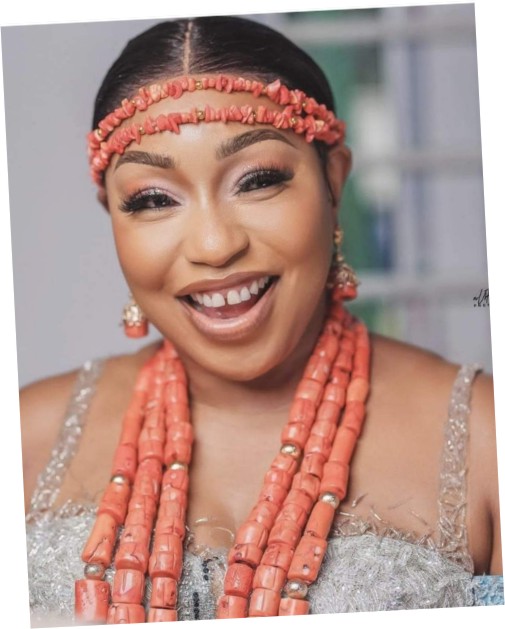 The ever-stylish Rita Dominic and her beau, Fidelis Anosike shut down Imo State for their traditional wedding ceremony. Many were not surprised by the stunning outfits Rita Dominic wore for the ceremony, because she remains the most stylish actress in the movie industry in Nigeria.

The ceremony which took place in her home town, Mbaise on Tuesday in Imo State was star-studded. This also didn’t come as a surprise to many, that a lot of movie stars could fly from their different locations, just to grace the occasion because Rita Dominic is one screen icon many people love dearly in the industry, both young and old, mainly because of her selfless, simple and caring attitude to people both in and outside of the industry.

Prior to her traditional wedding in Imo State, her friends and colleagues in the industry threw a colourful and intimate bridal shower party in Lagos for her.

The multiple award-winning superstar is one of the top-rated in the industry. She is also one actress that has kept her private life very private and has never flaunted any man on social media. But she took everyone by surprise in December 2021, when she showcased her newly found love. Many concluded this man must really be indeed special to her, and the relationship was very serious as well.

Who really is the man that has captivated the heart of screen diva Rita Dominic? His name is Fidelis Anosiek, an entrepreneur, publisher and founder of the Folio media group. He is from Imo State, Folio Media is a content creation and distribution company based in Victoria Island, Lagos. He founded Folio Communication Limited after graduating from the University of Benin when he was 24 years old.

The company houses some of the most reliable and successful newspapers in Nigeria, the Daily Times Nigeria.

Fidelis Anosike’s career is a successful one having acquired the Daily Times Nigeria in 2007 after the government shut down the operation of the former owner.

Rita Dominic remains one of the most loved stars in the industry. Just a few days before her traditional wedding an over the top bridal shower was organised for Rita at the EbonyLife place on Victoria Island, and it was star-studded too. In attendance at her pre-wedding soiree to celebrate her engagement were A-list stars close family and friends such as Joke Silva, Kate Henshaw, Nse Etim Ikpe, Michelle Dede, Dakore Egbuson, Chioma Chukwuka, Uche Jumbo, Mo Abudu, Lanre Da Silva, Ini Edo amongst others.

It was indeed a memorable evening filled with fun and laughter. The bride looked stunning in a flowery blue baby doll short dress.

For many who don’t know much about their love story? Mr Fidelis Anosike has close ties to the entertainment industry as the organiser of the Miss Nigeria Pageant.

The lovers met during the 2017 Africa International Film Festiva (AFRIFF) session on the film business in Lagos. But Rita being a very private person has kept everything under wraps until last December when she unveiled him. They eventually got engaged and finally tied the knot traditionally on the Easter season of April 18 and 19 in Mbaise, Imo State.

Over 50 A-list stars stormed Owerri for the traditional marriage. The entire event was planned by Amartha David one of the outstanding and exceptional event planners in the business. The venue for the wedding was totally transformed with the traditional setting of green and gold as colours of the day.

The bride’s outfit was designed by Tubobereni, while her make-up was done by Bebe Omagbemi, CEO Bibyonce.

The gorgeous bride Rita Dominic (Queen of Zamunda) stunned in two gorgeous traditional outfits. Her first outfit was a short sexy dress and she was adored in beautiful traditional beads, which she used both on her head, neck and waist. Everything about this outfit speaks royalty.

Her two outfits were designed by Tubobereni, the creative director and founder of the tubo brand. The second outfit, which was a long beautiful well designed long dress was in silver and red colour. The garment was carefully designed and detailed to perfection. Every inch of the dress tells a story. She looked breathtaking in the two well-designed outfits. With silver pulse and shoes to complement her gorgeous look. Her beads and horsetail were by Nene Jewellery and craft while Ugochukwu George Igbokwe took charge of her hair.

The traditional wedding was witnessed by celebrities from different parts of the country. The venue of the event was well secured by Petrez Guards, one of the leading security brands in Imo State. They provided Access Control Service and close protection service at the star-studded wedding.

Movie stars already arrived in Imo State a day before the wedding proper, and some of them such as Ini Edo, Nse Etim, and Uche Jumbo did a video from their hotel rooms to show that they are ready to shut down Owerri for star actress, Rita Dominic. Over 50 movie stars stunned in a green and gold Aso-Ebi, which lost 150,000 naira. Despite the fact that these celebrities outdo each other in looking their best, they all dressed decently, without unnecessarily revealing any part of their body which has been the trend lately among celebrities. They all looked classy and beautiful at the party. The turn-out was massive as they turned out in large numbers to show support to one of their own. Celebrities such as Medlin boss, Ronke Tiamiyu, Eve Esin, Chioma Chukwuka, Uche Jumbo, Eriata Ese, Ini Edo, Linda Ejiofor, Hilda Dokunbo, Lilian Afegbai, Joke Silva, Queen Nkoye, Kiki Omeli, Lala Akindoju, Sir Uti, Lydia Forson (from Ghana), Onyi Alex, Mercy Eke, Meg Otanwa, Nuella Njuibo, Lucy Edet, Beverly Osu, Tubobereni, Swanky Jerry, Chidi Mokeme, Okey Bakasi, Bobby Micheal, Tolani Baj, Helen Chukwu, Eniola Olusola, Ebube Nwagbo, Lilian Bach, Shan George, Kiekie, Uche Elendu, Vivien Okafor, Mr and Mrs Olagunju (Anita Joseph and real MC Fish). Idian Aisien, Susan Peters, Michelle Dede, Tana Adelana, Nse Etim and a host of other celebrities.

Despite the success of the wedding and the close relationship Rita Dominic shares with her colleagues in the industry, fans and well-wishers were surprised that some certain movie stars were absent at the wedding despite the wedding being fixed for the Easter holiday period. Kate Henshaw and Rita Dominic have been best of friends for decades, she was also present at the bridal shower party which took place at the Ebony Place a few days before the wedding. Many kept wondering why she was absent for the wedding proper. Though she celebrated the couple on her Instagram page on that day.

Genevieve Nnaji and Rita Dominic are from the same village and have equally shared good relationships in the industry, so many were surprised, she didn’t make it too. Screen diva, Omolola Jalade too was absent.

Funke Akindele has been going through a lot lately, probably that is the reason, she couldn’t make it.

Omoni Oboli was also absent, though she celebrated them on her Instagram page. The videos she shared on Instagram shows, that she is in location for a new project.