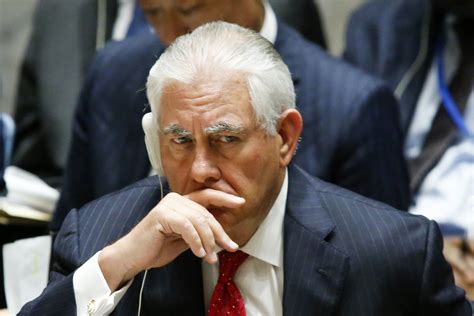 The firing of U.S. Secretary of State, Rex Tillerson, will not lead to an improvement in strained ties with Germany, Deputy Foreign Minister, Michael Roth, said on Tuesday.

“The dismissal of Rex #Tillerson does not make anything better,” Roth said in a tweet.

In an impromptu news conference on the White House lawn, Trump told reporters there was a “chemistry” problem between him and Tillerson.

“It was different mindset. It was a different thinking,” Trump said, adding: ‘’I think Rex will be much happier now.”

Tillerson, a Texan and the chief executive of energy company ExxonMobil for a decade before joining the administration, has long been dogged by reports that his time in office will be cut short.

Their long-simmering tensions erupted into the public in October, after Tillerson suggested the U.S. could engage in talks with North Korea.

“I told Rex Tillerson, our wonderful Secretary of State, that he is wasting his time trying to negotiate with Little Rocket Man … ‘Save your energy Rex, we’ll do what has to be done!’ Trump tweeted on Oct. 1.

Days later NBC News reported that Tillerson had called the president a “moron” after a July meeting at the Pentagon with members of Trump’s national security team and Cabinet officials.

Tillerson never denied using the description but said he would not be part of any effort to divide the administration.

Trump then challenged his top diplomat “to compare IQ tests” in an interview with Forbes magazine.

The 65-year-old Tillerson was at odds with a number of Trump’s policies.

For example, he favoured the U.S. remaining in the Paris climate accord and has been less harsh towards Iran on questions relating to a deal to keep it from attaining nuclear weapons.

Tillerson arrived back from a four-nation tour of Africa early Tuesday.

The trip was cut short by a day, a schedule change Tillerson had said was due to the developments with North Korea.

Trump added that CIA Deputy Director, Gina Haspel is in line to become the next CIA director, which would make her the first woman to hold that job.

Pompeo, 54 is an avowed opponent of the Iran nuclear deal and Tea Party conservative, who used to represent Kansas in the U.S. Congress.

Pompeo was highly critical of Iran’s nuclear deal with six world powers, which was agreed to in 2015 and meant to constrain Tehran’s ability to make nuclear weapons for at least 15 years.

Trump has pledged to pull the U.S. out of the deal if substantial changes are not soon made.