Why I Don’t Joke With My Wife – Gov. AMBODE’s Shocking Revelations 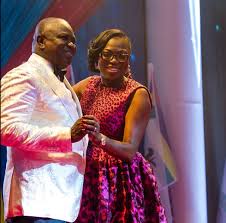 Many people do not know the kind of woman Lagos Governor, Mr. Akinwunmi Ambode is married to. This is because the Lagos First Lady is quiet and easy going. And she is a very private person despite the fact that she is like a golden fish which has no hiding place.

In his recent interview with City People, Governor Akinwunmi Ambode acknowledged the vital role the Lagos 1st Lady has played in his life. He revealed that apart from his dad and mum, his wife is also one person who has influenced him greatly. How did his dad and mum influence him into succeeding? He said it was because they doubted his ability to come out successful in his chosen profession, Accountancy. That was what propelled him to success.

“I graduated at 21. By 24, I had my Masters degree, I had my ICAN qualification. I was working with the State Government. So, you can imagine by age 24, you are already a multi-tasker. So, 30 years after, tell me, what else do you think I would have become apart from been a multi tasker? I am a multi-tasker for ever. Its my life. I have been designed to multi-task in other to prove that I don’t want to go the same route my parents. And then God gave me the grace. God gave me the blessing, endowed me with a prayer warrior in the person of my wife.”

“My wife has just been a complimentary blessing. People know me. I am too care free but I have a companion that is strong. Like they say that couples complement each other, that is one thing I cherish, all and my life. Sometimes, you meet people along the way and they become energy for you. They give you the right aura, and mine has not been different. I thank God. That is what has made me who I am.”

Who is First Lady, Mrs. Bolanle Patience Ambode? City People can authoritatively reveal that she is a devoted wife and mother. She was born into the Odukomaiya family in Epe, Lagos, on February 15, 1964. She attended St. Theresa’s College, Ibadan, Oyo, for her secondary school and Lagos State University (LASU), Ojo, Lagos, where she graduated in Physics/Mathematics for her first degree in 1989 and later Masters degree (MSc) in Public Administration in 1994.

Until her emergence as the Wife of the Governor of the State of Lagos, she worked as a staffer of the now defunct People’s Bank of Nigeria before she left to join Instant Finance Nigeria Limited and later Aguagem Consulting. She is the Managing Director and Chief Executive Officer of Rehoboth Chops and Confectioneries Limited. The Rehoboth bread is said to be very popular among Lagosians.

Since the inauguration of the administration, Mrs. Bolanle Ambode has showcased an exemplary profile of Mother to all. She has been an epitome of care and love as the chief host in the State Government House.

Her concern for the welfare and happiness of people has led to philanthropic activities revolving around care for the widows, people living with physical challenges and children

Mrs. Ambode is also said to be a consummate and cheerful giver who has, for some years now, been donating to many motherless babies homes in and around Lagos metropolis…

Why I Don’t Joke With My Wife – Gov. AMBODE’s Shocking Revelations was last modified: October 9th, 2017 by Seye Kehinde

What It Takes To Be Married To BISI OLATILO