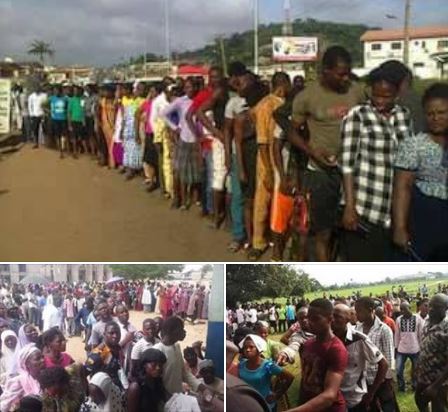 As Ekiti state decides who will take over from Ayodele Peter Fayose as the governor, the entire country is focused on what will be the outcome of the elections and also appraise the efficiency and transparency of the INEC, whom the 2019 election shall be entrusted.

City People is positioned to give you live updates from the heart of Ekiti as our reporters are on standby to feed you with live reports. Stay logged in.

There are reports that in Ekiti West at about 9: am, no staff of the Independent National Electoral Commission, INEC, was on ground as electorates are still waiting for arrival of electoral materials.

However, reports from some other polling units showed that the INEC card readers are having technical fault while the electoral officers are sweating it out to fix them.

There was an early turnout of voters in Ado Ekiti, the Ekiti State capital, as electorate already trooped out as early as 6.00 am, trekking long distances to get to their polling units.

Some were trekking as long as five kilometres to be able to vote for the candidates of their choice.

The large turnout could not be unconnected with the high mobilization drives by the two dominant parties, the All Progressives Congress and the

As at 6.45 pm, security and election materials were already arriving in those units.

Some of the voters trekked from hamlets located at Eminrin Erunfun located along Afe Babalola University way in the state capital to the heart of Ado Ekiti to exercise their franchise rights.

Today’s election is going to be a straight fight between Dr Kayode Fayemi of the APC and Prof Kolapo Olusola of the PDP.

Today, July 14, 2016, the electorates in Ekiti, the Fountain of Knowledge would march to polling booths across the state to elect a new governor of the state.

The eventual winner of today’s contest will take over from Peter Ayodele Fayose, the incumbent governor.

Fayose is expected to take a bow from the government house having successfully completed his tenure as enshrined in the constitution.

The Independent National Electoral Commission, INEC, had since released names of 40 successful candidates, who have indicated interest in becoming the next governor of the state and met the requirements.

However, among the 40 contenders, 14 candidates will participate in the poll as some candidates withdrew few days to the election.

Two persons have, however, been tipped for the position.

The former Minister of Mines and Steel Development, Dr. Kayode Fayemi, of the All Progressives Congress (APC) and the current deputy governor of the state, Professor Kolapo Olusola of the Peoples Democratic Party (PDP) are the two top contenders.

Hence, the Saturday election has been widely narrowed down as a straight contest between Fayemi, a former governor of the state, and Kolapo, Fayose’s deputy.

#EkitiDecides: Secondus tells PDP members, residents what to do when harassed