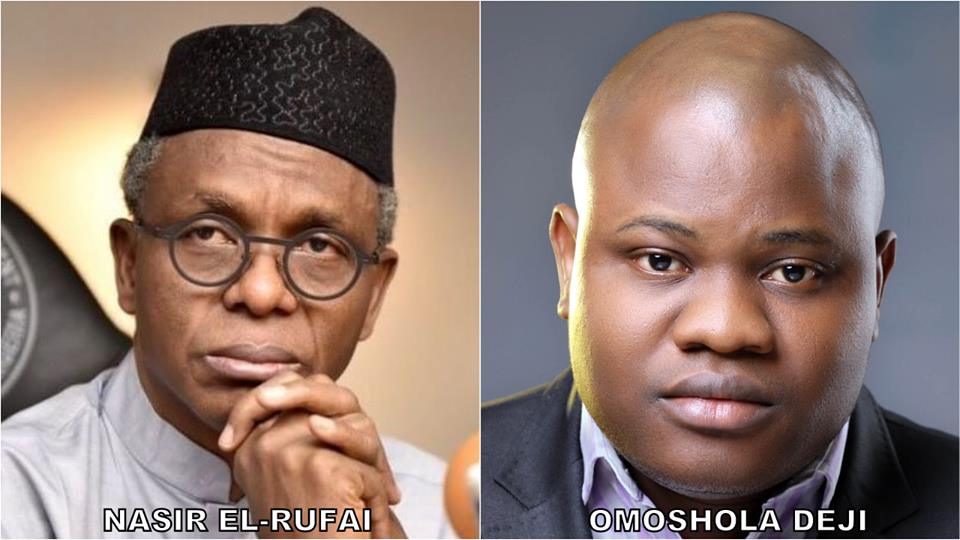 Election in Nigeria is more of a war than a contest. The benefits of public office attract people to politics and make them desperate for power. Candidates employ devious tactics to win, as if losing is punishable by death.

They dish out hate speeches and uncouth statements without considering the imminent doom such could drag Nigeria into. Governor Nasir El-Rufai of Kaduna State is in the eye of the storm. He stirred the hornet’s nest when he issued a death threat to foreigners who may want to question the conduct of the general elections starting February 16. This piece assesses the effect of El-Rufai’s statement on political behavior and Nigeria’s foreign relations.

The relationship between Nigeria’s executive arm of government and the global community has been uncordial lately. The United States (US), United Kingdom (UK) and European Union (EU) are casting doubt on the credibility of the forthcoming elections based on President Muhammadu Buhari’s controversial suspension of the Chief Justice of Nigeria, Walter Onnoghen. While commenting on the foreign stance during a live television program on 5 2019, El-Rufai expressed that “those that are calling for anyone to come and intervene in Nigeria, we are waiting for the person that would come and intervene, they would go back in BODY BAGS (emphasis mine), because nobody will come to Nigeria and tell us how to run our country”. A ‘body bag’ is a carrier bag used for moving corpse from a battleground, or an accident or crime scene.

Many thought the outrage that greeted the threat would make El-Rufai eat his words, but that never happened. The threat was rather defined as patriotism. El-Rufai argued in a statement issued by his spokesman, Samuel Aruwan, that “affirming a country will defend itself against needless intervention is the kind of statement you expect to hear from a patriot. It is not a call to violence. Warning about the consequences of meddling in another country’s affairs is legitimate”.

The global community and Nigerians who were infuriated by El-Rufai’s idiocy were hoping the Federal Government would caution him, but that also never happened. The Presidency threw her weight behind El-Rufai, saying he “spoke strongly in defense of national interest”. This is unsurprising as El-Rufai is a chieftain of the ruling party and staunch supporter of President Muhammadu Buhari. But how can the government of a country rationalize a threat to foreigners as national interest? The Presidency should have stayed mute than commit such a pricey blunder. National interest is the interest of a country as a whole, not that of subordinate areas or groups. El-Rufai spoke in defense of the ruling cabal’s interest, not for the majority of Nigerians.

President Buhari’s consistent show of double standard makes him undeserving of integrity accolades. His government labels El-Rufai’s threat a display of patriotism while unarmed Biafra secession campaigners were declared terrorists. The President’s henchmen warning the international community not to interfere in Nigeria’s electoral process praised their interference when it favored Buhari in 2015. Former US President Barrack Obama influenced the last presidential election against ex-President Goodluck Jonathan. Obama released a video urging Nigerians to open the ‘next chapter’ with their votes when an incumbent President is participating in the election.

Buhari applauded the UK, US and EU when they condemned the postponement of the 2015 elections. Buhari, then a presidential candidate, hailed the foreign interventions, even as Jonathan and his supporters stayed calm and eventually lost the election. The same foreign authorities of 2015 recently condemned the alleged politically motivated suspension of the CJN and the Buhari government is warning them not to meddle in Nigeria’s politics. Such glaring display of double standard approach demeans Buhari’s acclaimed integrity. Buhari only cries foul when he is not profiting; any action or person that does not favor him is either wrong, corrupt, unpatriotic or unwelcome.

The unintended grievous consequence of El-Rufai’s statement is the troubles Nigerians in the diaspora would face if any foreigner is injured or killed. The US, UK and Europe are Nigerians choice destinations. Those seeking greener pastures would be denied visas and those already in would be massively deported. We must not bite what we can’t chew! El-Rufai and the Nigerian government are threatening nations whose citizens visiting and living in Nigeria are law-abiding, while Nigerians are not the best-behaved persons overseas. Our nationals residing abroad illegally, disobeying laws and committing heinous crimes would suffer the foreign nation’s retaliatory measures the most.

Nigeria cannot long-survive the sanctions that’ll be stamped on her if any harm befall the foreign observers. The nation imports almost everything and is heavily dependent on foreign aid and loans.

El-Rufai’s uncouth statement would affect the inflow of foreign direct investments. No sane stranger would invest huge in a country whose leaders are threatening foreigners, undermining the rule of law and interfering with the independence of the judiciary.

Many support El-Rufai’s notion that Nigeria should be left alone to run her affairs without any external interference. The degree and limitation of nations sovereignty is an age-long scholarly debate. Nigeria is a member of many foreign organizations and a signatory to many treaties. The membership of global and regional organizations such as the United Nations and African Union has limited the nation’s sovereignty. Identical to the social contract theory on state evolution, nations overtly or covertly submit part of their sovereignty when they join international organizations.

The signing of treaties and embracing the globally recommended mode of governance and development, such as upholding democracy and achieving the Sustainable Development Goals, is a pointer that nations are expected to operate based on standards. Any nation that wants to be absolutely sovereign must not belong to any global body and such is virtually impossible. Nations are sovereign, but not absolutely sovereign. If nations are fully sovereign, why do international organizations set governing standards and principles and sanction erring nations? If nations are truly sovereign, why is the UN Security Council empowered to authorize military operations against nations?

Globalization has bond nations together in such a way that it is difficult for them not to meddle in each other’s affairs. Most nations have assets, investments and interests they care about in several other nations. For example, MTN is a South-African investment in Nigeria and any political-economic challenge that may affect MTN would naturally generate reactions from South Africa.

Foreign interventions are essential and commendable, but they are not always done out of good intents. The interventions are sometimes done to pave way for the exploitation of emerging nation’s resources. The unending war in Congo is a good example. The developed nations are renowned in providing dishonest economic interventions that entrench dependency. Foreign intervention has helped and harmed Nigeria’s economy. The nation lost interest in agriculture when oil multinational corporations (OMNCs) discovered and began oil exploration in the Niger-Delta.

The OMNC’s capital, skill and technology developed the oil sector, but that has largely been for their own benefit. Inhabitants of the region have lost their lands and marines to oil spills. The late Ken Saro-Wiwa’s assertion captures it rightly that they have no land to farm, no water to drink and no air to breathe. The OMNCs also refines oil abroad, instead of constructing refineries in Nigeria to create jobs and boost development. Foreign economic interventions often hinder emerging nation’s growth, but they are the lifesaving oxygen during the outbreak of epidemics such as Ebola, cholera and polio.

The politicians bragging that Nigeria does not need foreign interventions are those hoping to profit from the imperfections of our electoral system. The nation has a lot to gain from foreign electoral interventions and should embrace it, so long as the interventions does not influence election results. External intervention – especially via observations and recommendations – is a means of bettering the quality of our elections. The ruling party has no reason to move against foreign observers if the elections are going to be free, fair and credible. Observing elections help prevent fraud or manipulations, or expose such anomalies if they happen. Foreign observers are a credible means of monitoring the extremes of incumbent seeking reelection, especially in our clime where election results can easily be manipulated.

Observing the electoral process enables nations with mature democracies to recommend ways through which the electioneering process can be strengthened. It can lead to the correction of errors or weak practices, even while the election is ongoing. An observation of the electoral process by foreign persons and groups often boost the public and oppositions confidence in the results. Once the transparency of an electoral process convinces observers to release positive commentaries, the opposition parties may consider throwing in the towel and such increase the legitimacy of the government the election produce.

The US, UK and Europe’s warning is the essential stitch in time that saves nine. Issuing warnings and sanctions is the western nation’s means of avoiding the huge expenses they bare when conflict occur in developing nations. The West is the leading provider of military and humanitarian aid to troubled nations. Cautioning political actors is not inappropriate, considering the wanton destruction of lives and properties war brings.

Anarchy will only worsen Nigeria’s underdevelopment as amenities destroyed won’t not be promptly fixed due to paucity of funds. Even if available, such fund is better spent on settling striking unions and providing amenities. War is not an option for any nation that value lives. Infrastructures can be fixed, the economy can be revived, but lives lost can never be regained. Moreover, Nigeria does not have the capacity to confront the global powers if such need arises; not with the demoralized army struggling to conquer Boko-Haram.

El-Rufai and his encouragers needs to act cautiously and be wary of the consequence of their actions on Nigeria. The countries of the foreigners being threatened do not joke with their citizens’ lives. They are not like the Nigerian government that tolerates Boko-Haram and herdsmen. Issues based campaigns must be revived and the purveyors of hate speech and fake news should be appropriately sanctioned or prosecuted. President Muhammadu Buhari owes Nigeria the gratitude of ensuring the elections are free, fair and credible. The elections would pass, Nigeria shall remain.

*This piece is widely published by the local and foreign medias. Omoshola Deji is a political and public affairs analyst.

‘Celebrating Fayemi for who he is @ 54’- By Segun Dipe