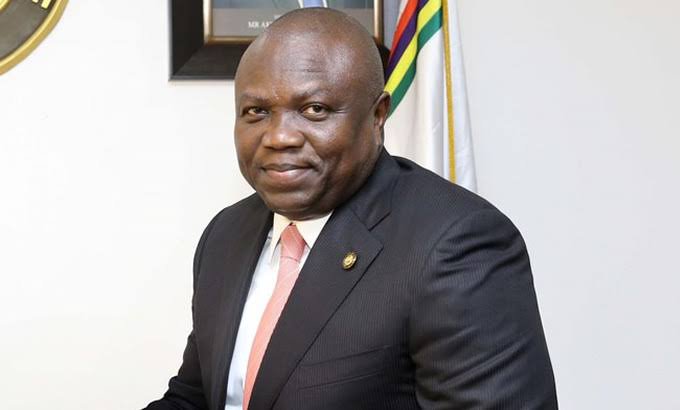 In less than 14 months to the 2023 general elections, contesting political parties within and outside the ruling APC are already devising their plot to either remain in power or unseat the ruling cabal, former Governor of Lagos State, Akinwunmi Ambode has been tipped as one of the key assets that will be used by a set of strong APC stakeholders in the bid to consolidate themselves in power beyond 2023.

Ambode who has been away from the media since his exit as the executive Governor of Lagos State, has been getting mentions and has been linked with the serving APC caretaker chairman and governor of Yobe, Mai Mallam Buni at the central in recent times.

The Epe-born accountant is the first democratically-elected single-term governor in the history of the state, losing his second term party nomination to the incumbent, Babajide Sanwo-Olu, after falling out with Tinubu, who railroaded him into the position in the first place, in 2015.

By political calculations, especially in Lagos State, the privilege for re-election is not always based on good performance, otherwise, Mr. Akinwunmi Ambode would be serving his second tenure now as the executive Governor.

A source within the APC hinted that though Ambode is still hugely popular in his native Epe, it is doubtful if he would want to sit down with the Tinubu political family again, for any form of “business” in the light of how he was treated in the build-up to 2019 poll.

Despite maintaining a low profile, Ambode is reportedly being worked into the equation as a way of compensating his governorship loss, and remaining silent in the face or persecution in Lagos. Ambode has become another emerging, quiet-spoken, demonstrably effective, and subtle political personality from the southern zone.

The fact that he has been off the radar made it easy for him to operate unnoticed. Sources confided Ambode has been going in and out of Abuja power house since the past 6 months without giving clue to the media. It is said that his close relationship with the current APC caretaker chairman, Governor Mai Mallam Buni is so cordial that they hardly spend a week without seeing each other.

Recall that the APC, had three parallel congresses with one of the factions led by Akinwunmi Ambode in the end Mala Buni, recognised Ambode’s faction and his list of executives which is part of a coup and ongoing efforts to weaken the influence of the National Leader of the party. Top sources revealed that Ambode’s faction was sponsored by Buni, who is the Chairman, Caretaker/Extraordinary Convention Planning Committee so as to weaken Asiwaju in his perceived stronghold.

And of course, one of the key members of this faction, the Lagos4Lagos convener Abdul Azzez Adediran, popularly known as Jandor is reported to be in close contact with Ambode. Ambode himself has not publicly said that he is running for any political post either at the state or federal level, but his footsoldiers are making deft moves behind the scene, in preparation for the right time for their principal to male a grand entry. Ambode has demonstrated that he is a personality and leader not swayed by extraneous emotionalism and parochial cant. This footing, many speculate, put him on a collision course with Tinubu. Let’s quickly juggle our memory as to what transpired that led to his fallout with the power that be in Lagos. Ambode who was reportedly to have gone out of line with Tinubu’s vision for Lagos, which is wrought in iron blasted in a furnace at his Bourdillon fortitude.  As the lines are blurred between his plans for the future of Lagos and his personal interest that can bring, or that may be perceived to bring, direct or indirect benefits to him, Tinubu has reserved to himself the right to determine who is taking Lagos in the direction of the common good.

Ambode, it was also reported, refused to “bribe” Lagos legislators, and turned down the proposition to concession the Fourth Mainland Bridge to a construction company linked to Asiwaju. He divided the tax return that was solely consessioned to Alpha Beta, revoked the contract for the redevelopment of Falomo Shopping Centre and banned Vehicle Inspection Officers from Lagos roads. The straw that reportedly broke the camel’s back was ridding Lagos of the menace of ‘area boys’ operating as members of the National Union of Road Transport Workers (NURTW), and relieving Lagos State Waste Management, LAWMA off their duty, while launching Vison Scape to do the same job.

By consequence, Akinwunmi got a bitter taste of Politics in a skewed governorship primary, in which the odds were highly stacked against him. Hemmed in on all sides by turncoats and obstacles that his teaming army of supporters could not fight. He watched his own deputy governor brandished his ballot paper and cast her vote for his opponent, Babajide Sanwo-Olu.

Eventually, in an emotion laden broadcast in October 2018, Ambode conceded defeat. Stated: “The interest of our beloved state must always supersede that of any person or group,” Mr Ambode said. Though he criticised the primaries, alleging violence, electoral malpractices; and that he and his supporters were disenfranchised, he has remained in the APC.

As he bid the state farewell on the eve of his exit as governor, Ambode looked back at his administration. “A few of our policies might have been unpopular but these were decisions taken with the best interest of our state in mind. With the benefit of hindsight, maybe we could have done some things differently but our intention was always clear, for the good of Lagos,” he retorted.

After all said, it will be a delicate decision that can make or mar Ambode’s political future. His prominence within the party in Lagos and his newfound romance with powers that be in Aso Rock is not in doubt, but just as stated earlier, Ambode is man that cannot be predicted.

What To Expect From TINUBU If He...