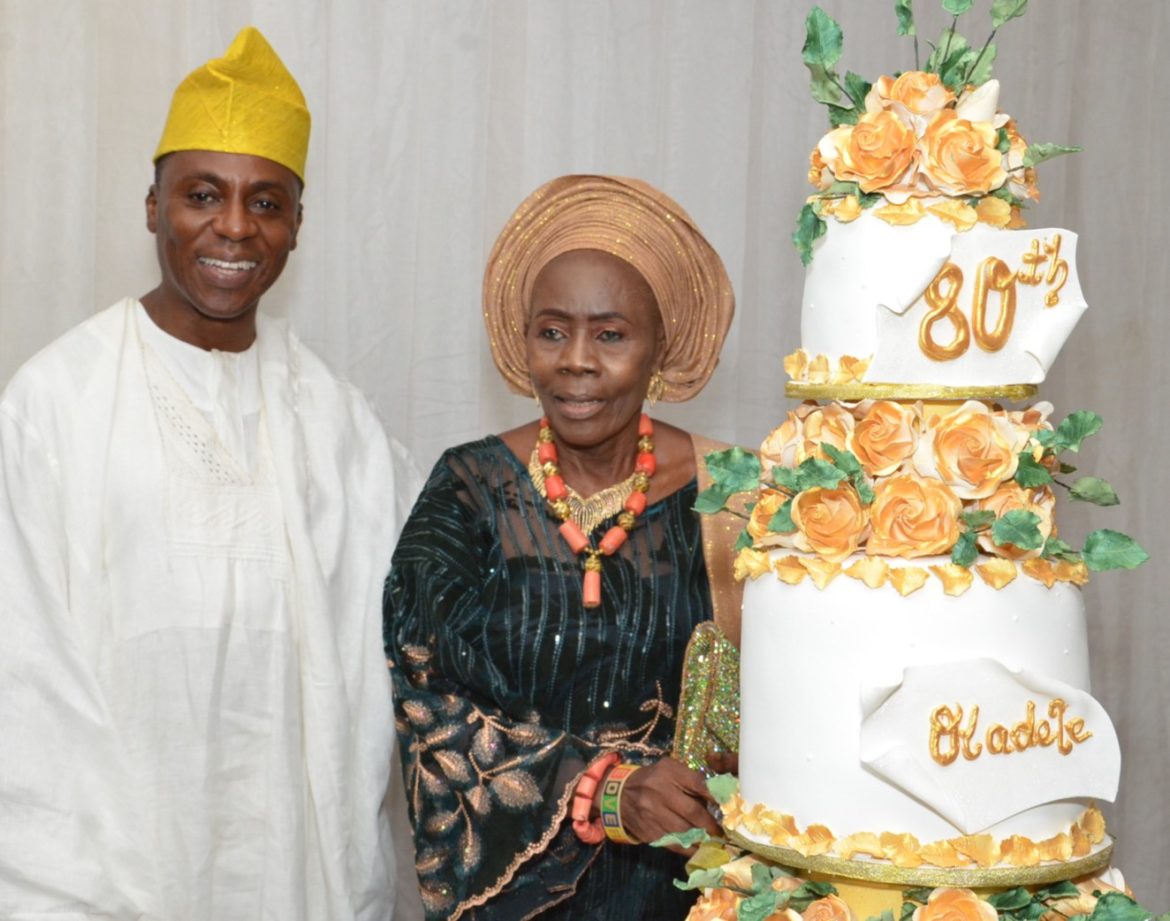 On Saturday, 2nd November 2019, a popular Lagos Fashion designer, Ade Bakare and siblings celebrated their mom’s 80th birthday in Grand style. The classy event took place at WheatBaker Hotel, Ikoyi, Lagos. The ace designer left no stone unturned to make sure the event was successful and we can categorically tell you that the event was one of its kind. The party was a show of class, it wasn’t filled with a crowd, but prominent and important personalities in Lagos. The event, which lasted for 4hours. started with an opening prayer, which was led by Pastor Lampe Omoyele. Shortly after the prayer, the beautiful, Ageless and energetic birthday lady danced into the hall with joy written all over her face.

She looked 20 years younger than her real age. One would have thought she just clocked 60. She was looking so beautiful in her Green and Peach Lace, which was also matched with a peach Gele and simple but classy gold accessories. Ade Bakare was called on to her his mother, He said beautiful things about her. He talked about how his mom supported his career as a Designer and how she would always encourage him to do more. He also mentioned when his mom advised him to have a degree before learning fashion designing and that was what helped his brand to become a household name in the fashion industry.

Did we tell you that the event was graced by society matriarch, Sisi Abbah Folawiyo? The never-aging society woman stood out at the event, of course, she is known for luxury and she made people turn 360 degrees at the event. CEO Ovation Magazine also graced the occasion with his son.

The celebrant, Mrs Patience Oladele Bakare gave a short gratitude speech she appreciated everyone who honoured her and prayed that they all get to their destinations safely. Did we mention that it was a buffet birthday party? There were varieties of delicious foods and drinks for all guests. Let us talk about the mother and son moment, Ade Bakare and his mom had a memorable time at the event. When it was time for them to dance, Ade Bakare held his mother with so much love, you need not be told that they share a very strong bond. She also got a beautiful and huge 80th birthday cake.