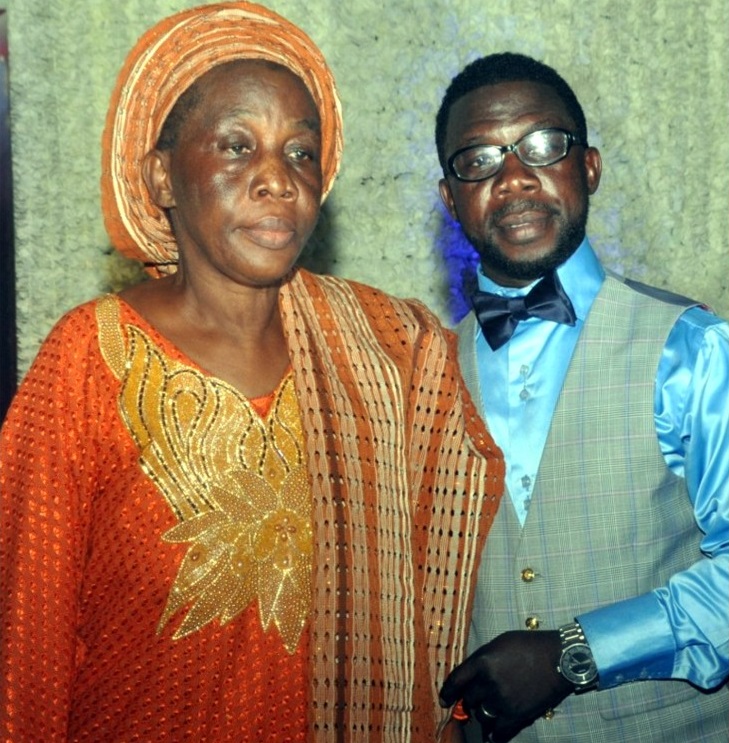 The venue was beautifully decorated in blue, white with touch of gold and wine. There was so much to eat and drink as Mama was treated to a fun filled and fulfilling 70th years birthday celebration.  City People Showbiz Reporter, BIODUN ALAO brings you gist from the party.

CHIEF EBENEZER OBEY ON THE BANDSTAND

Legendary musician Chief Ebenezer Obey was on the bandstand, Mama could not have asked for anything better, as he dished out lots of his evergreen songs. He left people begging for more. Prophet Isreal Oladele also appreciated him specially for accepting to perform for real at the party. According to the prophet, he charges as high as 4 to 5 million to perform at any event, but did this for free.

THE CELEBRANT’S TRIUMPHANT ENTRY INTO THE VENUE OF THE EVENT

Deaconess  Dorcas Ogundipe’s story is of someone that started from nothing, went though hardship, did lots of menial jobs to make ends meet, but when God said it was time, the story changed for good. And that explains why Prophet Isreal decided to celebrate her in the neighbourhood where she once suffered and went through hell. She was ushered into the venue of the event in a stretch limo with a customisedd plate number Mama at 70. And at that moment, in company of her siblings, the neighbourhood stood still for her, as lots of people stepped out to see the person that was being honoured that way.

Prophet Isreal’s wife, though heavily pregnant, was up and doing. She was on her feet althrough, taking care of guests, and also making sure everything went on smoothly without any lapses. She was gorgeously dressed in a sky blue lace chosen for the daughters and wives of the family. She was indeed a perfect host.

Popular Yoruba actor, comedian and musician, Baba Ijesha was one of the special guests at the party, that also entertained the guests. His song was comical, but people liked and enjoyed his performance. He equally cracked jokes along the line just to entertain the guests.

BLUE IS THE COLOUR OF THE DAY

It was indeed a blue affair, the venue was decorated in blue. All the sons of Deaconess Dorcas Ogundipe were dressed in dark blue native and royal beads, to compliment their looks, while the ladies were all gorgeously dressed in sky blue lace and a dark blue gele to also complement their looks.

Deacon Sanyaolu is one of the members of the Ogundipe family. He said people see him as Mama’s first child, and also that there’s no decision he takes till date without consulting Mama for approval.

He describes Mama as a very easy going and simple nature women, who takes issues about life easy. She treats and sees everybody as one, without any form of discrimination. She is always willing to displease herself, just to make everybody happy. She goes out of her way, so that love and unity reigns in the family. He described her as a rare gem and a virtuous woman, which is difficult to find these days.

Prophet Israel declared  that the party will not be complete if Pastor Daddy Fashawe doesn’t pray for Mama. And that turned out to be one of the major high points of the party. He prayed fervently for Mama and urged people to also pray and sow seeds into the celebrant’s life. He also prayed for all the guests.
IGBO CULTURAL TROUPE PERFORMS

They were an all guys group dressed in black and white. They Serenaded Mama with some special tunes on her special day, and the prophet also appreciated them, saying he was once like them going to parties to also perform.

Belly Bliss caterers took charge of the food at the event. They served from local to intercontinental dishes, guests had more than enough to eat and drink.

Unknown to many, the popular music act Mega 99, is married to one of Prophet Isreal Oladele’s younger sisters. He stormed the party and was spraying as if money was going out to fashion just to celebrate his mother in law. Same applies to the prophet’s friends and well wishers, who flew in from outside the country just to give mama  a fun filled and fulfilling day.

The celebrant Deaconess Dorcas Ogundipe is described as a very simple and humble person, and this showed in her outfit and behaviour althrough the party. She quietly sat on her special seat althrough the party and was beautifully dressed in an orange native with lovely gold embroidery. And the only time, she stood up was when she had to leave the venue of the party when the party had ended.

Prophet Isreal Oladele was the Chief host of the well organized party. At the beginning of the party, he wore a burberry trousers and waist coat with a designer shoes which matched with the outfit. Later on he changed into the dark blue Mama’s sons wore for the party. He was equally on his feet all through the party. He took every opportunity to appreciate his mum for all the love and care she showered on him and his siblings.

He gave the closing remarks, appreciated everybody that took time out to come celebrate his mum, and prayed that joy will never cease from their homes.  Prophet Isreal is one man that enjoys dancing a lot and he displayed different steps, after the party ended.