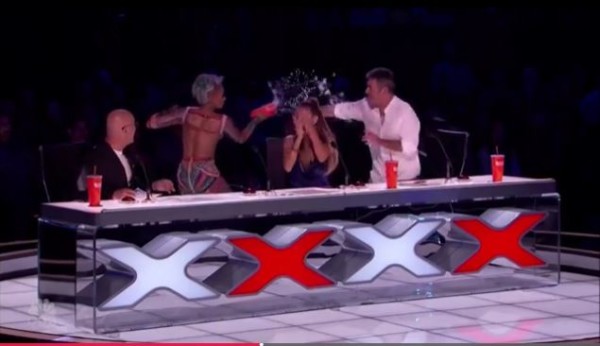 Tempers frayed this week between judges at the “America’s Got Talent” show after judge Mel B threw a cup of water on Simon Cowell and walked off the stage.
The dramatic incident happened after Cowell had made a ridiculous joke at her expense. It was gathered that while judging a contestant who did a magic routine, Cowell attacked Mel B saying: “I feel like this would be a lot like Mel’s wedding night, a lot of anticipation…not much promise or delivery.”
Mel B, who is going through a divorce with estranged husband Stephen Belafonte, angrily threw her cup of water at him and walked off the stage.
The former Spice Girl was gone for only a short while though, as she returned to her seat before the next act.
Host Tyra Banks made light of the entire event, saying: “Mel B is out. This is live TV, y’all. Live TV.”
Watch video below:
Hilarious! Two ‘America’s Got Talent Show’ Judges Fight on Stage (Video) was last modified: August 23rd, 2017 by Arinze Ago