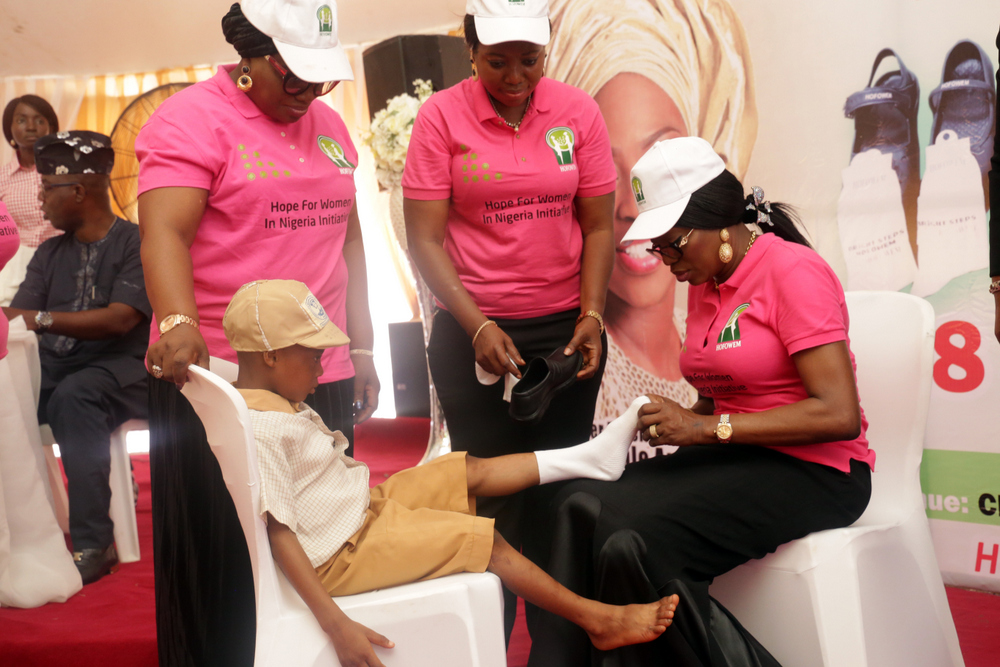 It was a moment of joy at the C& S primary School, Majidun area of Ikorodu on Tuesday, June 5, 2018 as the Wife of Lagos State Governor, Her Excellency, Mrs Bolanle Ambode conveyed her 2 year running foundation, Hope For Women In Nigeria Initiative (HOFOWEM) at the heart of Ikorodu, to dispense pairs of shoes to pupils of primary schools in Lagos State.

The program, which was tagged #ProjectBrightStep was launched in 2016, to address social issues that bothers on children, widows, youths, aged and the sick.

Recording huge success in the flagship project, Her Excellency stated that HOWOFEM was able to provide 175,000 shoes and branded socks for primary school pupils across local governments in Lagos State in 2017. She also stated that the primary goal of Project Bright Step is to “Boost the morale of the children and sensitize the society that the welfare of the pupils is important, in getting the best of them in their academic pursuits”. 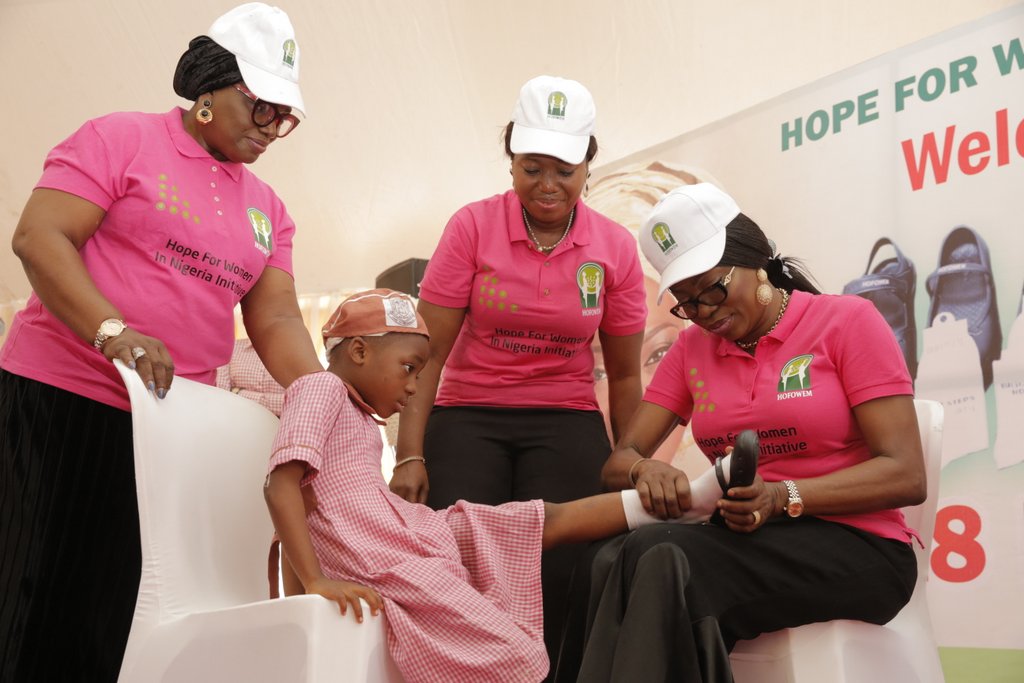 She announced the plan to distribute no less than 50,000 shoes and branded socks across the state in 2018 with distribution centers in Agege, Maryland, Yaba, Ojo, Amuwo Odofin. Epe, Lagos Island, and Ikorodu

She emphasized that the project was motivated by her love for children and desire to see them decently kitted for school to boost their self-confidence and overall performance.

She urged the pupils to be serious with their academic work not make excuses of challenges and limitations.

“With strong determination, you can overcome all barriers to achieve your desired dream. Keep your eyes on the stars and your feet to the ground, do small things in great ways. It is about your attitude of mind”, she advised.

Speaking also at the event, the CEO of HOWOFEM, Oyefunke Olayinka , commended Her Excellency, Mrs Bolanle Ambode for her dogged spirit to impact the lives of children and the needy, through the HOWOFEM initiative.

She urged parents and wards to support the government in achieving the goal of eradiating poverty and raising the children morally. 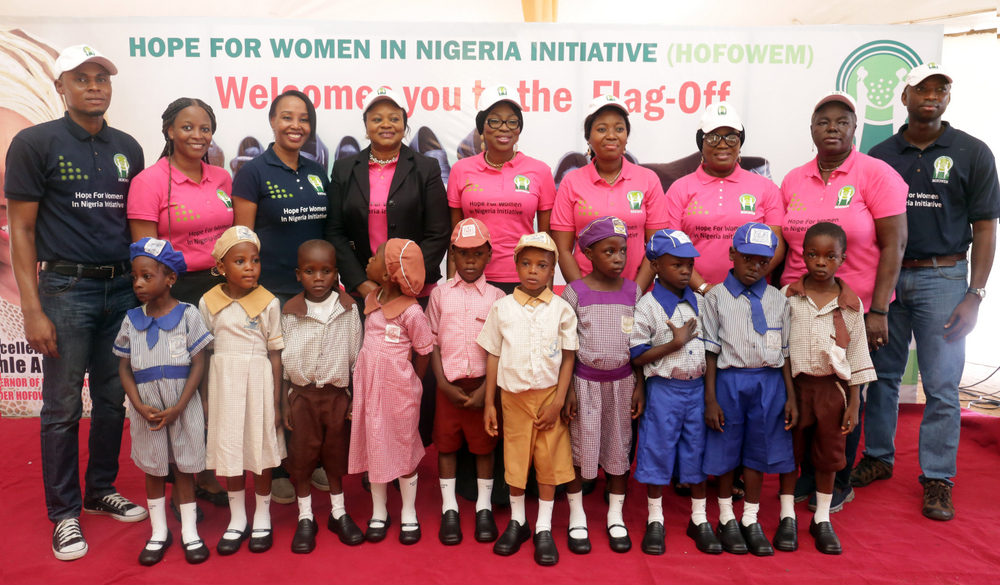 She also advised the children to always put in their best in everything they set to do.

Speaking at the event, Chairman, State Universal Basic Education Board, SUBEB, Dr. Ganiyu Sopeyin said the distribution of the shoes and socks would take place in all 1,016 public primary schools across the State.

He said last year, pupils in primary one to three benefitted from the distribution in 1,010 primary schools.

Commending the First Lady for the gesture, Sopeyin added that the exercise was a testimony that the present administration’s clarion call to Non-Governmental Organisations, NGO, was yielding the needed synergy between government and well meaning Nigerians to raise the standard of basic education in the State.

Permanent Secretary, Ministry of Education, Mrs Elizabeth Adekanye described the project as laudable and a step in the right direction to provide quality and accessible education to pupils in Lagos State Primary Schools.

A representative of the parents,  Mr Ajayi Ajibola also commended Mrs Ambode for the gesture, as it would relieve parents the burden of providing shoes and socks for their wards. 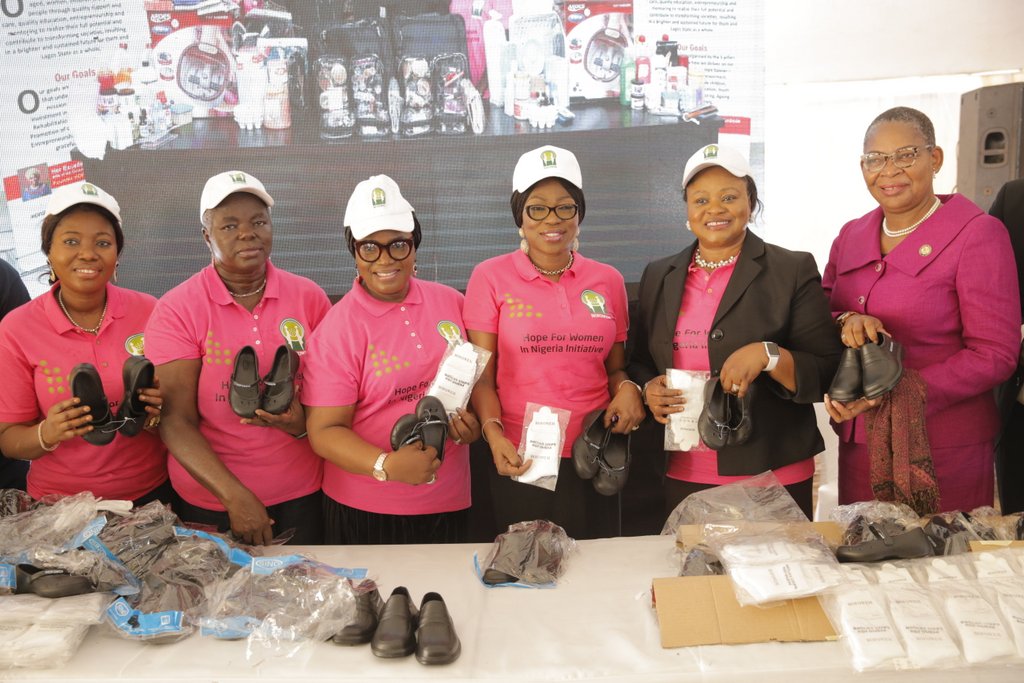