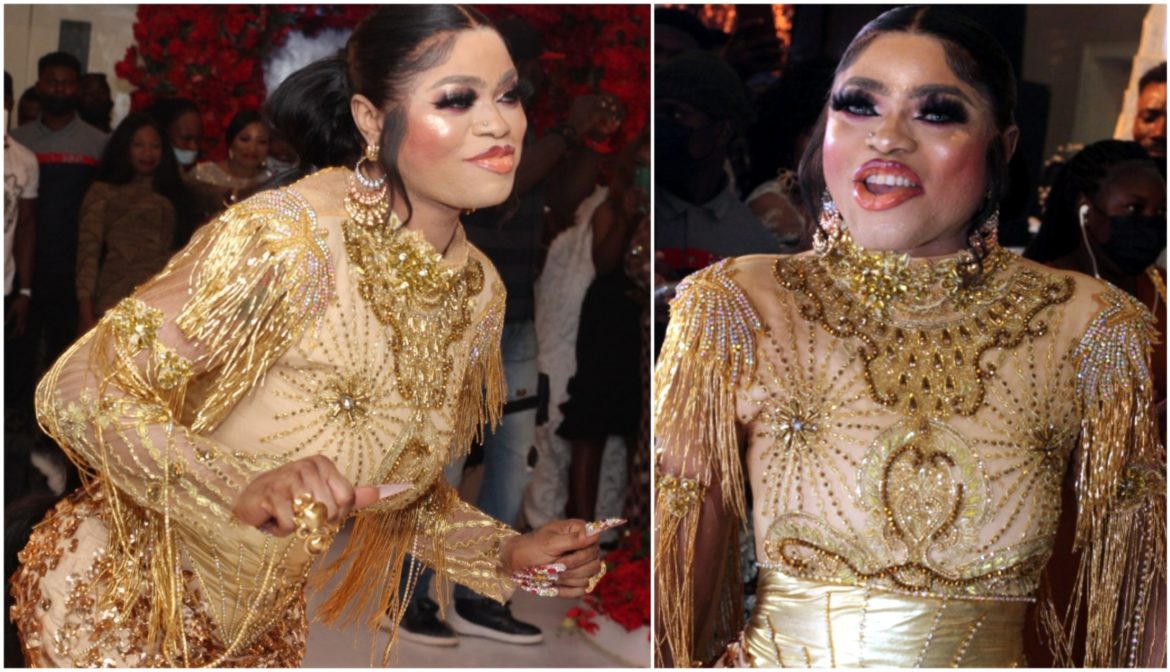 Popular crossdresser, Idris Okuneye, popularly known as Bobrisky, literally shut down  Lagos Island on Tuesday, 31st August 2021, for his grand 30th Exclusive Birthday party. The exclusive birthday bash took place at the Civic Centre, Lagos, and was witnessed by the creme-de-la-creme of Lagos.

He promised to have one of the most talked-about parties in Lagos and he surely kept his promise.

As promised, the legendary king of Fuji music, Kwam 1, de ultimate was officially on the bandstand.

MC Ajele and MC Saviour Life of party were the official  MCs of the exclusive party.

Before the birthday celebration, he promised to share 30 exclusive looks before the ‘D’ day of the party, which he did as a celebrity stylist, CEO Luminee, designed all the beautiful outfits he spotted for the birthday bash proper. He wore  2 different beautiful outfits and rocked an all-around luxury outfit, which he spotted for his grand entry into the venue of the party. He later changed into a very expensive purple HOH native attire and green gele to compliment his look.

He rocked  N15 million jewellery to mark his 30th birthday.

The venue of the party even spoke luxury and class, as it was totally transformed with subtle beautification materials. . The setting and decoration were on point.

It was planned by Belle Of The Ball Eventsng.

Bobrisky’s birthday cakes were castles and according to him, the two cost him N5 million. The cake was baked by Final Touch Cakes. He flew the cake maker to Lagos from Port Harcourt. As earlier said, he also flew in a Hairstylist from Toronto, Canada all expenses paid by him just to make his hair.

He had a grand entry into the venue in a yellow Lamborghini and was ushered in by his friends.

City People’s Head of Movie Desk, Biodun Alao,  brings you the gist from the exclusive party.

A few days before the birthday, the crossdresser kept his fans updated on the details they would see on the day.  and he carried them out to the letter.

To kick-start the programme, Bob took to Snapchat to brag that he was the biggest girl in Nigeria as he would be spending half a billion naira on his birthday celebration…

Bob announced that he would give one of his fans a new Benz car worth N10 million. One of his birthday cakes cost N3.5 million and that he would order two cakes at a cost of N5 million.

His invitation box has bottles of champagne and other luxury items in it. One of the bottles costs 35,000k and he invited  400 guests, so he had already spent N32 million on invitation alone. There were also bottles of perfume in the box “One Crystal Men” and each costs 20,000k  multiplied by 400 and that is N8 million, while the Moet costs N14 million.

He boasted that he would be inviting 10 active fans to attend the party, 5 girls and 5 guys. There would be free hotel accommodation and feeding for 2 days for the 10 fans and they would also go home with 100k cash each as thanks for coming for the party.

He also boasted that anyone who got the invitation was,  indeed, special to him.

The legendary Fuji king, Wasiu Ayinde, was to perform at the party. He equally made the announcement in a video shared on his Instagram page that he presented the Fuji legend a special box, which obviously was his personal invitation.

He promised to have a grand and different birthday celebration compared to what most celebrities have been having. According to him “Girls, don’t go and copy me o, can you use over N30 million for only invitation cards? Moet bottle is 35k each multiplied by 400 (N14 million). I am the biggest girl in this country. Don’t worry, the total amount for my invitation cards is N32 million. Who is the biggest girl again? I also bought myself a birthday gift worth N450 million, interior decoration costs N50 million, a total of N500 million, I would upload it in October because I am not done with the interior decoration, so let’s wait”.

.His makeup was done by Helad Odelica and he was to pay N250k for it.

He also promised to unveil 30 luxury design outfits to celebrate the birthday, which he did on his page with top-notch designers.

Many people know that Bobrisky is a lover of luxury and unique gold jewellery. He buys from the biggest gold merchants online and anything less expensive would be short of expectation for his 30th birthday celebration..

More than 200 Lekki super-rich guys made necessary preparation for the Shindig and stormed the venue of what could rightly be described as the party of the year.

Despite being very controversial, Bob maintains a very cordial relationship with many super-rich guys, babes and celebrities and most of them turned up for the big-time party.

And true to his words, he carried out to the letter all he boasted.

The celebrator, Bobrisky, dazzled in 2 different outfits on the day. First, he looked gorgeous in an all gold luxury gown, afterwards, he changed into a luxury purple HOH lace and a green gele to complement his look.

His jewellery was a unique side attraction at the party. City People learnt that he bought  N15 million 18 carat gold from one of the biggest gold merchants in Lagos. He spotted different jewellery to complement his 2 outfits. His grandmothers even honoured him.

She danced to Kwam 1 music and he sprayed money on her grandson. She came out to demonstrate support for her grandson.

King Wasiu Ayinde was on the bandstand serenading the celebrator throughout the duration of the party, while his friends also danced to Kwam 1 lyrics.

2 beautiful cakes  on display, it was learnt were  baked by a baker flown  in from Port Harcourt

Luxury and exotic wines were on display. Bobrisky had already boasted to be the biggest girl in Nigeria thereby his party must of necessity speak of luxury and class.

There was so much to eat and drink.

It is Bobrisky’s birthday and being the biggest girl in Nigeria as she claimed, everything was expected to be on point and top-notch. The party lived up to expectations. The best hands in party affairs were consulted to handle the guest’s food and drinks. Party chef was the main caterer, Soul Food Venue, was also there, Desert Studio was on standby, Sola Elija was also on standby among others.

Many celebrities made it to the exclusive party. Celebrities such  Mercy Eke, Mercy Aigbe, Eniola Badmus, Sotayo Sobola, Biodun Okeowo, Laide Bakare, Pretty Mike, Kokun Foundation, Nengi of Big Brother, Lady Golfer among others.  Lekki big boys and girls also made it to the party.

READ ALSO: HOW I WAS ABLE TO CREATE MY OWN BRAND IDENTITY – STAR ACTOR, LATEEF ADEDIMEJI