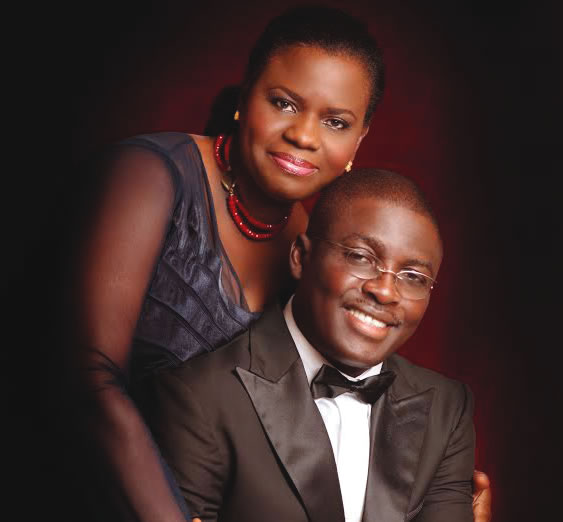 A few days back, the former Deputy Governor of Lagos State, Otunba Femi Pedro threw a classy party in honour of his wife, Hon. Justice Jumoke Pedro. It was her 60th birthday and many dignitaries honoured them.

It was also a moment for the Pedro’s to show how much they love each other. They have both made a success of their career so also have they made a success of their marriage and this reflected at Justice Jumoke 60th birthday. Both were involved in an open display of love in the presence of their children and close families who graced the occasion. They have been together for over 4 decades and many were surprised when Otunba Femi Pedro  revealed his love story at the party and also in a fine tribute he wrote about his wife. Otunba Pedro is always known to be an astute corporate man and many times, a politician and at this event he took the audience on a memory lane of a marriage of forever which started 43years ago.

He said” he has known his wife for about 43 years precisely since 1975 and married for 35 years and 10 months. He refreshed the  memories and said they met each other in Lagos, around Ebute Metta, Lagos where Justice Jumoke was also staying with her parents. He was 20 year old then and Jumoke was 17 years.

He said he stylishly invited her to a party with him and informed the DJ to play a Marvin Gaye song for him so that he could dance with her but Justice Jumoke shunned him off that she was not dancing. So he told the guest at the reception that the dance she could not dance that day was what she will dance to today and told the DJ to play the same song for him. Every guests chorused with their claps and watched them as they both took the dance floor, hand in hands, danced and display love openly by kissing themselves to the admiration of all”.They were later joined by their children, families who also danced alongside with them.

Justice Jumoke is one whom her husband Otunba Pedro cherishes so much and it shown at the birthday. He prayed for her and also wrote a loving birthday tribute to her, in his words, Happy birthday my darling wife, the only woman I would wish to be shipwrecked on a tropical Island with. Today is your day. May your life continue to be filled with everlasting love and happiness. “I will never forget the sparkle in your eyes that made me fall in love with you,on the first day I sighted you about 43years ago,You have never lost that sparkle.Our marriage of almost 36 years has been mightily blessed with a home full of joy and happiness,beautiful and successful children and grandchildren. I made the best decision of my life by marrying you. You give my life a sense of purpose and this allows me to appreciate all the good moments and overcome the bad moments.

Nothing in life compares to you and nobody has ever done so much for me. When the chips were down,you stood by me like the rock of Gilbratar,you offered me wise counsel,spiritual and emotional support,and you have stayed with me through all my ups and downs.When I was transferred out of Lagos for several years during my banking career,you took care of the home and groom our four young lovely boys on my behalf. You sacrificed your career so that mine could grow and flourish. You are a true inspiration and a delight to be around. Happy birthday to the most beautiful , caring and understanding human being on the face of entire planet, whom I will continue to love and support for the rest of my life.  Through sheer hardwork and determination,your career as a lawyer, a magistrate and a judge has blossomed. You have dedicated over 35 years of your life to the judiciary, and I am glad that you are still waxing strong. You are a devoted public servant with an unblemished record,rock solid integrity,impeccable character and an enviable list of achievements.you are diligent and focused .you are as doggedly committed to your works and your career as you are to your family and the church. You are a true child of God who serves him devotedly. In spite of your busy schedule,you still serve God at our home church Guilding Light Assembly and at the Anglican Church of Christ as the chancellor of Ijebu West Diocese”. Happy birthday my darling wife.

It was indeed a colourful and loving moment for the Pedro’s as they showed their romantic and social side especially to his wife in a grand way.

How I Got Hooked To My Wife The Very 1st Day – Femi Pedro was last modified: January 5th, 2019 by Reporter

How Gov. AJIMOBI Was Told In 1956 That He Will Become Great

How I Fell In Love With My Husband @ 1st Sight