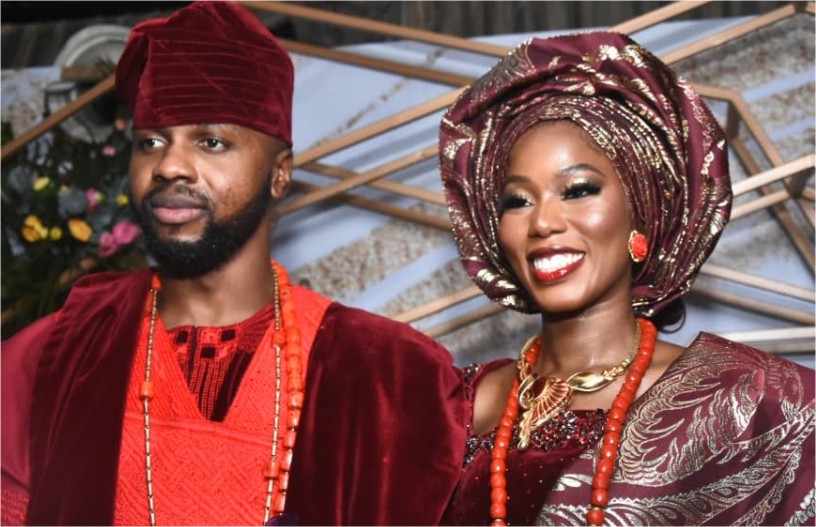 Tagged as the Wedding of the year, Otunba Gbenga Daniel made an impressive statement with his daughter, Kenny’s wedding. The superlative wedding took place on Saturday, August 7. His pretty daughter was married into another wealthy Lagos family, the Williams. The groom is Lagos Bigboy and media personality, Debola Williams popularly called Debola Lagos.

It was indeed a massive wedding that attracted the paraphernalia of the high society, both politically and socially. Lagos has not experienced that kind of wedding this year, no wonder many termed it, “Wedding of the year”. While the Daniels moved all the society matriarchs and patriarchs to the party, the Williams moved all the showbiz industry to the wedding which made the wedding a huge one. Right from when they had their introduction, many had concluded what to expect at the wedding will be on a high note.

This beautiful nuptial between Kehinde Abioye and Adebola Tokunbo may have come and gone but the memory still lingers on in the mind of all the important guests that attended because it can be termed as the classiest and most expensive wedding in recent time. Everyone and everywhere was abuzz of the prep of the wedding and both families did not do less as they spared no cost to give their children a superlative wedding. Many of those who got invited and were able to enter have had only one thing to say, that this is ‘’the society /Showbiz wedding of the decade’. They are even insinuating that there has been no wedding even in recent times that could match this particular one in terms of sheer extravagance & opulence. If you are privileged to have been invited, the packaged invite in a big box would have given you a hint that it will be a classy party, in fact, the Access card was in the form of an ATM card while Aso Ebi also came with it.

The money spent is in Millions of Naira. The estimated money of about 200millions must have been spent. From the hosting of introduction party which had over 300 guests to the wedding proper where 3 event centres were used. The 3 event centres used are the Balmoral Convention centre inside the Federal Palace Hotel, and both will not forget in a hurry the wedding as it further put the event centre and Hotel on the map again. The entire hotel which had over 100 rooms were taken over by important personalities and those who flew in from abroad to celebrate with the couple.

For the wedding, the couple rode in Rolls Royce which can be estimated to have cost 80 million naira, even the bride’s parents also ride in their Rolls Royce to the wedding. The bride’s outfit we gathered was beautifully made and from a source, it was embellished with some diamond studs which must have cost a fortune. The biggest balmoral hall of the 3 used for the wedding, costs about 6million naira and the other 2 smaller ones which was used for church service and Engagement party costs over a million naira each.

Do we need to also tell you that 2 event planners were in charge of the wedding, what do you expect at a first-class event like this,? Number one event planner in Nigeria, Zapphire Events led by Funke Bucknor was in charge of the event. She was also supported by Magna Events. With this, you should know they must have incurred a lot. The décor for the wedding was done by Zapphire events and guests who were at the wedding would testify to how amazingly and beautifully, Funke decorated the whole space, it was simply out of this world.

Let us now talk about the outfits of the parents, the coral and 24-carat gold chain put on by Yeye Olufunke Daniel was killing. The fashion icon nailed all her outfits and those jewellery are in millions. What of the long-chain on the bride’s father’s neck, which is also a combination of gold and coral, it is very expensive down to their shoes and other accessories, they surely did not come to play.

Professional vendors who were contracted for the wedding were numerous. Up to over 10 food vendors catered, From appetizer to main course and dessert, all were in abundant supply. what of the drinks company? expensive cognacs and wines littered many tables. This must-have indeed cost a lot for an event that lasted up to 11 hours. Now let’s go to the wedding cake? It was baked by the number one baker in Nigeria, Cakes by Tosan, the all-white gigantic cake was a 14 tiered cake and you can just sum up what that can cost with all the embellishment that came with it.

Music is not left out of this wedding, Having King of World beats, King Sunny Ade on the bandstand is surely some cool cash, he charges not less than 4million to perform at any event, he was also billed alongside a Lagos wave-making band, Veentage Band. It was also another band entirely that performed at the reception.

To make the event grand, many dignitaries stormed the wedding, from the presidency to the ministers, governors and diplomats. And also to add colour to it, celebrity men and women, alongside many big babes and boys dazzled in their different Aso Ebi.

Amongst the top dignitaries who were at the wedding were Prof Ibrahim Gambari who represented President Mohammadu Buhari, Former Head of State, Gen.Ibrahim Babangida was represented by Prince Afegbua, the Vice President, Prof Yemi Osinbajo also stole the show as he was ushered in with a loud ovation. He was one of the big shots who honoured Otunba Daniel. The chairman of the wedding was no other than Ex-President Goodluck Jonathan who was there for several hours with his wife. To drag a former president to your event, you must be also powerful. We gathered OGD shares a special friendship with the ex-president since his days as the Deputy Governor of Bayelsa State before he became President while OGD was the governor then.

The first man of Lagos, H.E Governor Babajide Sanwoolu led over 8 governors to the event. He stormed the engagement wedding in a loud way and was seen with many other governors at the party. Amongst the governors at the wedding were Ondo Governor, Rotimi Akeredolu, Ekiti Governor, Kayode Fayemi, former River State Governor and minister of transportation, Rotimi Amaechi, former Governor of Imo State, Rochas Okorocha, Ex-Gov of Osun State, Olagunsoye Oyinlola, his Deputy, Erelu Olusola Obada, former governor of Ogun State Olusegun Osoba,  Ogun Governor, Prince Dapo Abiodun represented by Mr Talabi, Ex-Gov of Anambra State, Peter Obi, The northern governors are also not left out, There is Jigawa Governor, Mohammadu Abubarka, Kebbi State governor, Abubakar Atiku and former Katsina Governor, Ibrahim Shema who all sat for several hours at the wedding.