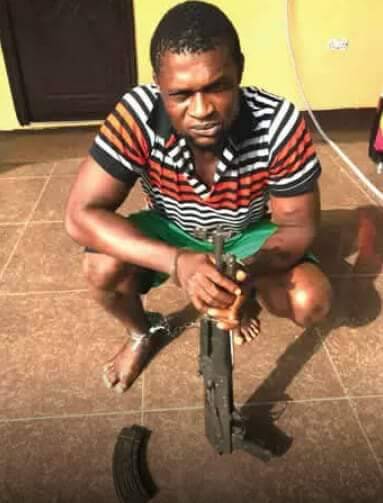 From where he sat on the floor, rolling his eyes from one side to the other, no one could easily guess how many lives 39-year-old Adeola Williams, popularly known as Ade Lawyer, could have taken in the past 10 to 20 years until he opened his mouth to confess.

Many of those present during his confession couple of days ago were therefore taken aback when he revealed that he had killed over 100 persons, as he noted that assassinating people was his source of livelihood for over 10 years. “But now I’m born again,” he added.

Williams, a father of three from Ijebu Igbo in Ogun State, was recently arrested by the Inspector General of Police Intelligence Response Team over the killing of one Ganiyu Ayinla, aka Pinero, who was the personal assistant to Azeez Adekunle Lawal, the National Union of Road Transport Workers chairman in Idumota, Lagos. The incident took place on January 23.

While giving account of his activities, he said, “Assassination has been the source of my livelihood for more than a decade now and I know I have taken many lives that I can’t even count but God knows I am a new person now.

“If I get a chance to regain my freedom in this life, I will never go back to crime again. I also advise the millions of youths out there that crime does not pay. I was into crime for over 20 years and despite the risk involved and lack of rest of mind, I have nothing to show for it except the uncompleted three-bedroomed bungalow in Ibadan.

“I have nothing on ground to fall back on despite taking the lives of more than 100 Nigerians as an assassin. May God forgive me.”

Willliams also revealed how he was once arrested and remanded in Ikoyi prison in 1998 for stealing a wristwatch belonging to late fuji musician, Sikiru Ayinde Barrister, at a show in Lagos Island.

He said, “A fight broke out when he was about leaving the hall and I found my way to the front where I succeeded in snatching his watch from his wrist. People saw me struggling with his bouncers and the next day, they brought policemen to arrest me in my mother’s house.”

Eventually freed in 2001, he said he went back to being a bus conductor and driver in Ajah – the same job he was doing before he went to prison. He said he joined the NURTW, Ajah Branch, where he was made a park attendant.

Through his years in NURTW, he said he worked for the likes of Musiliu Akinsanya, aka MC Oluomo, Akanni Olorunwa, who was once a chairman of the union in the state, and one Mustapha Sagoe, who took over his unit initially.

However, Williams said he decided to take the life of Kunle Poly for refusing to talk to the state chairman of the union, Tajudeen Agbede, on his behalf. He said he worked hard for Agbede to emerge as the chairman but that he was dumped after the election.

Williams added, “I thought about my predicament because my wife was heavily pregnant and the money I was getting from Oluomo wasn’t enough and I wasn’t ready to use my gun for armed robbery, so I decided to end the life of the man who refused to help me mend my relationship with Agbede.”

He said after the attack on Kunle Poly, he was later arrested but that he didn’t want to go down alone, thus he indicted some other persons.

He added, “I decided to rope in Olorunwa because he was the one who ruined my life. It was my support for him during his fight with MC Oluomo that made me to lose my position at the union. After he was removed from office, he had so much money but he was wasting it on women and movie actors and he refused to help me.

“If he had given me good money after he left office, for staking my life for him, I won’t have been roaming about looking for who to kill. I was just so bitter, so I framed him. I made up the story that he paid me N500,000 to kill Kunle Poly and I also lied that I seized his vehicle because he was owing me a balance of N1m.”

He said he also decided to rope MC Oluomo as the person who sent him because he expected him (Oluomo) to come to his aid but that he didn’t show up, until he “finally decided to come clean and say the truth and give my life to Christ. I also lied earlier that I worked for Prince Kazeem Eletu-Odibo during the fight between him and Oba Elegushi.”

“Though I didn’t know Prince Kazeem before, I have heard his name very well before and I asked for assistance from him several times through somebody who knows him but he refused to help me, and that was why I mentioned his name too. But now I am a born-again Christian and I will always say the truth and stand by the truth.”

I Was 26 When I Fell In Love With OMOTOLA @ 16 – Sexy Actress, OMOTOLA’s Husband, Capt. MATHEW EKEINDE