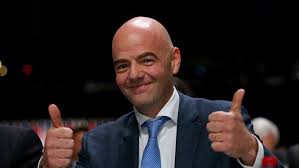 Gianni Infantino, president of world football’s governing body, FIFA has been re-elected for a second term in Paris on Wednesday.

Former Uefa secretary general Infantino was behind the expansion of the World Cup from 32 teams to 48 for the 2026 tournament, which will be held in the United States, Canada and Mexico.

Infantino, 49, was re-elected until 2023 without opposition at Fifa’s annual congress in Paris.

In 2016, he succeeded Sepp Blatter and has increased the number of teams at the 2026 World Cup and proposed key changes to the Club World Cup.

Ex-president Blatter was in charge for 17 years until he was banned amid a corruption scandal in 2015.

Speaking to Congress, on Wednesday, Infantino said, “Nobody talks about the crisis at Fifa any more or rebuilding it from scratch.

“Nobody talks about scandals or corruption, we talk about football. We can say that we’ve turned the situation around.

“This organisation has gone from being toxic, almost criminal, to being what it should be – an organisation that develops football and is now synonymous with transparency, integrity.”