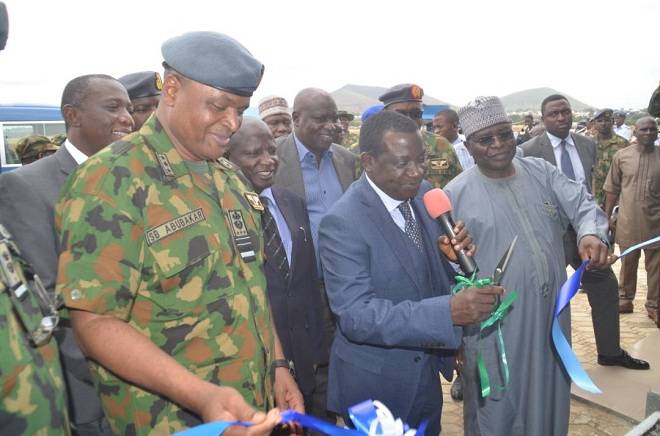 The Nigerian Air Force (NAF) has unveiled its new base in Kerang, Plateau state meant to aid the operational activities, assist wounded the distressed troops deployed to the region to stop the killings and conflicts.

The base include the commissioning of newly constructed office and residential accommodations for the 205 Combat Search and Rescue Group (CSARG).
/*
In a statement signed by the Director of Public Relations and Information, Air Vice Marshal Olatokunbo Adesanya he revealed that the Chief of Air Staff disclosed that the 205 CSARG in Kerang was established to provide aid and operational assistance to wounded and distressed troops serving in combat units.

The Chief of the Air Staff (CAS), Air Marshal Sadique Abubakar, had during the Ground Breaking Ceremony of the new Unit on 7 March 2017, promise to ensure timely and adequate provision of infrastructural facilities for the smooth commencement of operation by the Unit.

He then used the occasioned to appreciate the laudable generosity of the Governor and the Kerang Community for the provision of 100 hectares of land for the establishment of the new Base.

Other commissioned projects include the Commander’s Official Residence and a 4 x 2-bedroom residential accommodation for Senior Non-Commissioned Officers serving in the Unit.

The 205 CSARG, which had been operating from Jos since its establishment one and half years ago, will now commence operation from the new Base in Kerang.

Commissioning the projects, Governor of Plateau State, Barrister Simon Lalong,
commended the CAS for ensuring the provision of the new facilities barely a year after the Ground Breaking Ceremony.

The Governor noted that the commissioning of the Base was a testimony of the Federal Government’s resolve to ensure security of the citizenry and maintain peaceful co-existence.

Speaking further, Barrister Lalong said that the establishment of the Special Operations Command and the commissioning of projects at 205 CSARG Kerang was a glowing evidence of the commitment of the NAF leadership to the welfare of its personnel and a reflection of its determination to defend the territorial integrity of Nigeria.

He added that the unwavering desire of the CAS to make the NAF the best Air Force in Africa was no doubt yielding the desired dividends.

The Governor noted that the strategic location of the Unit in Kerang would not only shorten its response time to emergencies but would also improve the turnaround time at providing combat search and rescue for troops and citizens in distress.

READ ALSO: The Many Drugs Nigerian Youths Are Hooked On