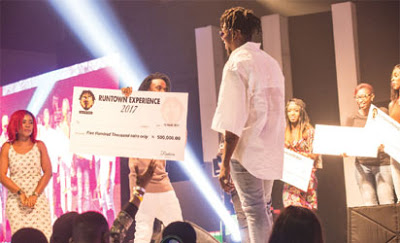 Nigerian musician, Runtown, on Friday, 14th April 2017 gave out a total sum of one million Naira to fans who participated in a dance competition at his ‘One Night Only’ concert which held at Landmark Centre, Oniru, Victoria Island, Lagos.

Though the event occurred a week ago, the reports of his act surfaced recently.
During the performance of his hit song ‘Bend Down Pause’ at the concert, Runtown and one of the hosts of the show MTV Base’s Ehiz called six female fans up to the stage to engage in a dance contest.
The ladies were asked to dance to the popular dancehall jam and the audience chose the winner by roaring a ‘Yes’ or ‘No’ and at the end of the competition, Runtown surprised everyone by giving out N500,000 to the winner and N100,000 each to the rest.
Did You Know Runtown Gave ₦1Million To Fans At One Night Only Concert? was last modified: April 24th, 2017 by Arinze Ago