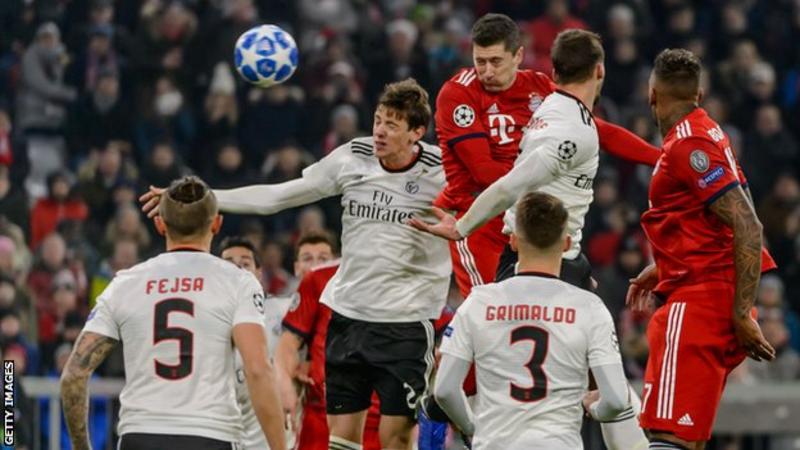 Robert Lewandowski passed the 50 Champions League goals mark as Bayern Munich cruised past Benfica to book their place in the knockout stages.

Lewandowski headed his 50th and 51st goals, becoming the seventh player to achieve the landmark.

Veteran Franck Ribery added a fifth as Munich sealed their place in the next round, alongside Ajax in Group E.

Ajax’s 2-0 victory at AEK Athens was marred by violent scenes in the Greek capital as police clashed with the visiting Dutch fans.

A petrol bomb was used, while home fans reportedly threw flares towards the away end inside the stadium, as former Southampton striker Dusan Tadic scored both goals for the visitors.

Elsewhere, CSKA Moscow’s chances of qualification to the knockout stages were ended with a 2-1 home defeat to Viktoria Plzen in Group G.

The result in Russia saw Roma progress with Real Madrid, despite suffering a 2-0 defeat to the defending champions in the eternal city.

In Group F, Hoffenheim came back from 2-0 down to level proceedings at home to Shakhtar Donetsk, before Taison secured all three points for the Ukrainian side in injury-time.

United followed Juventus – who overcame Valencia 1-0 in Turin – into the next stage of the competition as Marouane Fellaini struck the winner in injury-time.