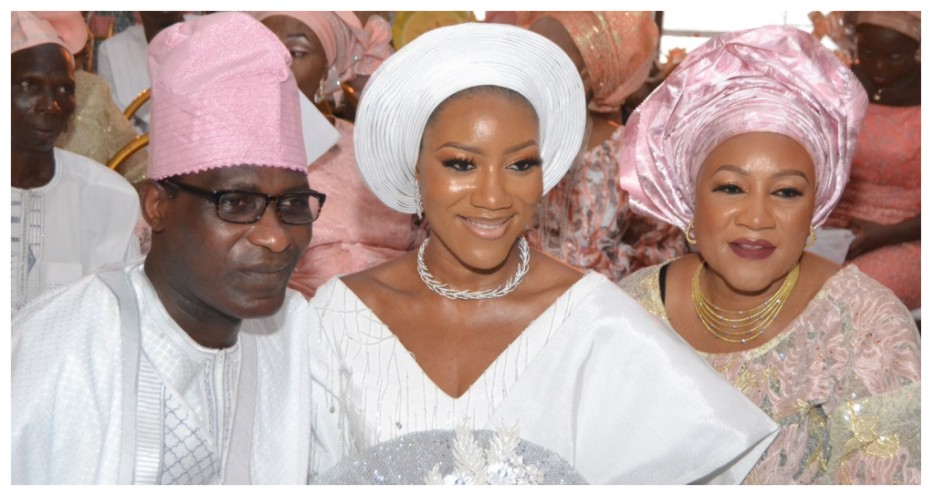 Drags Over 50 LONDON Ladies To LAGOS

Mrs Abiola Alawode is the brain behind one of the most sought after celebrity catering brands “Anamiscatering in London”. She is not just popular and influential, she is close to many super-rich Nigerians in the United Kingdom. So also her handsome hubby, Alhaji Sheriff Alawode, a top London businessman who has been staying in London for over 30 years.

Though both are based abroad. The bride’s parents didn’t forget their root and this was why their Ejigbo mansion was filled to the brim on 17th of February 2020 when Abimbola first introduced Oladimeji Eko. He is also based in the United Kingdom but his parent-led a powerful delegate to seek the hands of Abimbola in marriage.

The Freshwater Event Centre was filled to brim for the grand engagement which was anchored by “Remi SAN”.

It was a memorable event for the couple’s parents as they watched their two children who have not only made them proud in their education but they also look stunning on their big day.

Tall and ebony pretty Abimbola dazzled many when she stepped out in luxury matched with a unique hand-picked luxury shoe and purse. Her handsome hubby Oladimeji, who complements Abimbola in looks and brain were later joined in holy matrimony.

Perhaps, you don’t know that the Anamis Food boss started her catering outfit in Nigeria before she joined her husband in London. This was why the likes of Yeye Bewaji Ayo Julius, Mrs Foluke Adeniyi-Jones, to mention a few came to honour her.

Permit us to tell you that Mrs Alawode is the Aunty of popular Small Chops Vendor, Saheed Kekereekun of Saaheeto Small Chops. The super-rich Lagos big boy was among many who witnessed the D-Day.

There is no doubt that Mrs Abiola Alawode is not just stylish, her love for colours was obvious as she stood out at the 2-days wedding in Lagos. She chose Yellow luxury lace for introduction, while she rocked a peach colour lace for the wedding.

Many of her friends flew in from London with her, while some came from Canada and the United States. Pastor Yinka, Mr & Mrs Olaniyan, Adetoun Omooba, Mrs Ada Jabaru, Alhaji Saheed Taiwo were among many who came from London. Mrs Olabisi Yusuph, Adebimpe Kazeem also flew in from Canada. Let’s tell you that Anamiscatering boss, Mrs Alawode’s mum was one of the foremost Lagos food caterers. Her late mum was very popular at Adeniji Adele municipal in the 70s/80s. That is where she got her catering skills. As you are reading this, preparation is in top gear for the grand finale of “Ekolove4real2020” which will take place in London later in the year.

7Up & LIPTON Team Up To Battle CHIVITA Over Ice Tea Drink