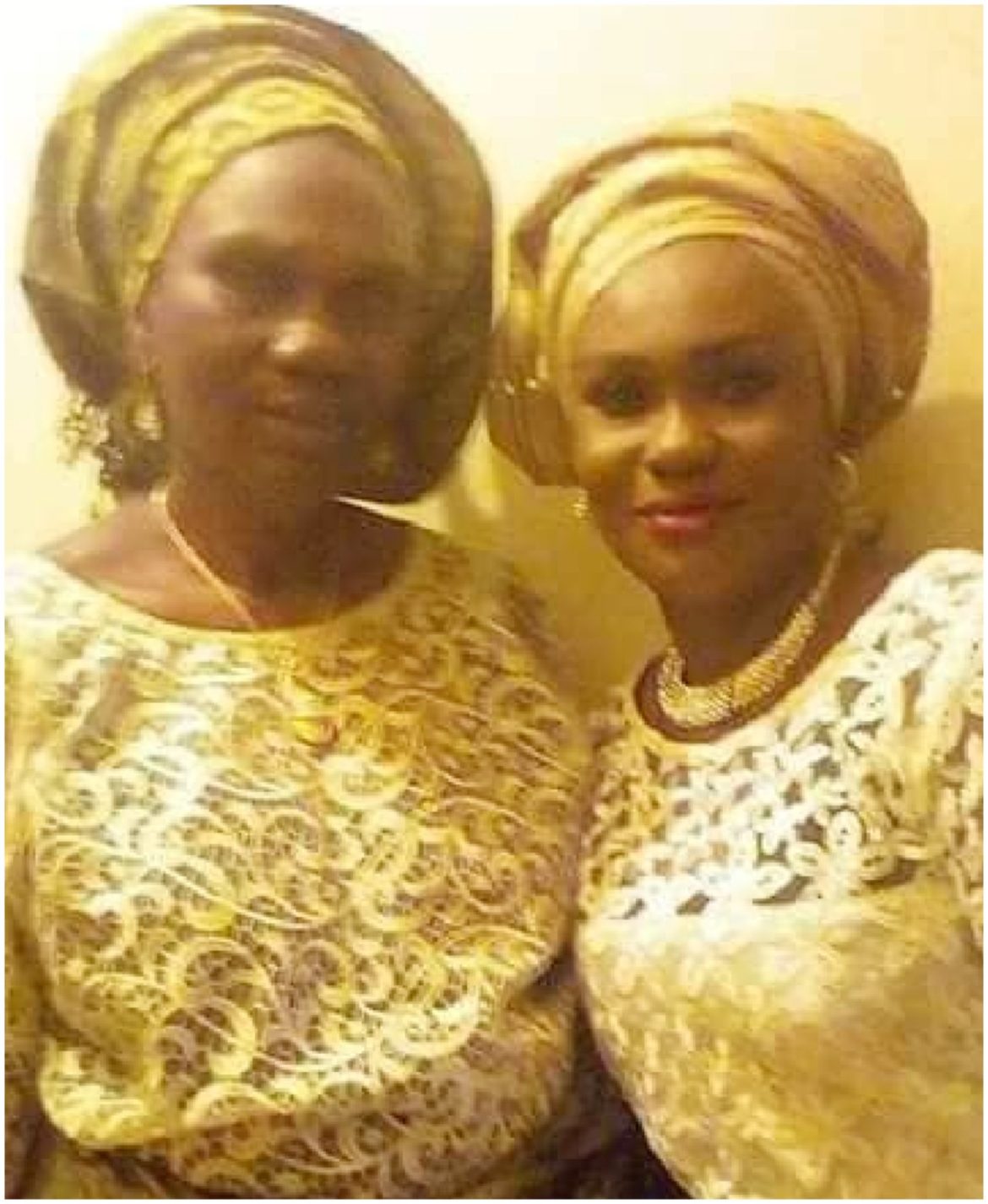 Friday 26th October 2018 was the day the remains of late Chief Mrs Anthonia Abeke Ogbamola was laid to rest. It was a celebration of life for the mother of the popular LTV female presenter, Bukola, Ogbamola-Atandare, as families, friends and well-wishers came out en-masse to celebrate the life well spent of the remarkable woman.

Late Chief Mrs Anthonia in her lifetime according to her daughter, Bukola was a courageous and a bold woman who was until her last breath a pillar of support to her both biological and adopted children. In her word “my mother, my best friend, my confidant, gist mate, prayer warrior, my prayer partner, my mentor. My Amazon, a virtuous woman, a loving and dedicated wife, sweet, loving, caring adoring mother and grandmother, yet a disciplinarian.

You were a pillar of support to us, your children and so many adopted children that you had. You were strong, bold and courageous, you made it seem so easy whenever you were praying because you talk to God like, He was right in front of you and you could see Him. When you wake up in the morning, the kingdom of darkness trembles because they know that when you get on your knees to talk to your father, their kingdom is in trouble.

You were a realist, easy going, you were humble and kind to everyone around you. You believed so much in the concept of love and family. You loved so much atimes, I wondered if you ever remembered yourself because it was always about people and not you. You were always happy and satisfied to put smiles on the faces of people. Madiba Toluwabori your first grandson misses you so much. Joko and Kale wept so much that if tears could bring you back, you would be back with us now.

Nimim who loved you so much that he never wanted to share you with anyone has not been able to put the pieces together but he knows that he is sharing with the angels and Jesus Christ now. Your husband cries every morning and night. We your children find it difficult to accept it but we are also trying not to grieve like unbelievers.

Anthonia Abeke Badejoko… I called you my twinnie. You live on in our hearts and all the values you instilled in us, we will keep to the letter. We loved you and still love you. If there was a second life, I would love to be your daughter again. “These were the kind words, Bukola said to celebrate her mother, late Chief (Mrs.) Abeke Ogbamola.

Late Chief (Mrs.) Anthonia Abeke Ogbamola was a devout Catholic She worked in various capacities, which include cleaning of the church in spite of her age or status. She was the President of the Confraternity of Christian Mothers of Christ The King Catholic Church, Akowonjo and President of Saint Patrick Society. That explained while the whole church was filled up even before the commencement of the service. Officiating minister were all at their very best as the whole programme was well coordinated before her remains were taken to her house at 11, Alhaji Ogunsola Street, Egbeda for her last respect and proper burial.

The reception and entertainment of guests followed immediately at 10 Degrees, Oregun, Ikeja, Lagos where journalists, politicians, high and mighty gathered to wine and dine. Though, it started a little bit late to the scheduled time considering the proximity. Getting to Oregun from Egbeda was a bit tough due to the congestions on the road. Nevertheless, family and friends still gathered and waited patiently for the arrival of the Omo-Olokus.

Chief (Mrs.) Ogbamola had many children who though were not biologically hers, were loved by her, but her biological children were 5, namely – Oluwabukola Ogbamola-Atandare, Bisi Jacks, Mobolaji Ogbamola, Yetunde Adeyemi, and Gbenga Ogbamola.

The colour of the day is blue and that informed the well-decorated hall with the touch of blue. Also, Aso-Ebi for the day is blue Ankara. Guests and well-wisher actually did justice to the Aso-Ebi with their matching jewellery to complement it.

WHAT OTHER CHILDREN ALSO SAID ABOUT THEIR MOTHER

This is still so surreal. You used to say “ma sin yin koja oko iberu” the day I heard of your death, I was in pain, confused and scared. The pain of losing you is a thousand times more than labour pains, but we are consoled by the fact that you are at the feet of Jesus interceding for us. I love you mammi, you will never be dead to me.

Mama mia! It took me forever to write this because somewhere in my mind, I’m still in denial.

You were a woman who did everything within her capacity to give her children the best. You were strong from the beginning to the end. Principled, pragmatic and practical. You were very principled and pragmatic in your approach to things, this I took for granted until I grew up. You did not mind whose ox is goad as long as you played out the truth. Your heart was healthy towards both friends and foes. I believe you could have been a great political leader.  A dutiful disciplinarian, you did not spare the rod and a word to go with it. A woman of God said, if you do not discipline your children at home, the society will help you punish them. You did not leave us to be punished by society. For this, I say Thank You.

My mother! I loved you from the first breath I took to your last. I remember how I made you my valentine as a teenager and saw it through to adulthood. You had your ways and that was what made you special.

I remember your words of wisdom, and they’ve been a guiding light in my affairs in life.

(1) What you won’t take in affluence, you reject it in lack (2) Don’t smell what you can’t eat (3) Never go beyond your means, so you won’t be embarrassed. And a whole lot more.

Mummy, I thank you for everything. For your thoughtfulness, selflessness and devotion to family while alive. You were never a burden to anybody. Your entrepreneurial acumen has been gifted to all your children. You never joked with anything that has to do with the saint. I’m glad you were in church the day before you passed on and had your sacrament.

Mummy, words fail me but, I want you to know that we’ll carry on strong just as you’ve taught

us and your legacy of love; family and God will always be supreme to us.

I’ll reiterate, you were never a burden to anyone and even in death, you chose the way of the saints. Though we hurt and in some instances query the Almighty, we know His ways are different from ours. I also know, you are with the angels. Mummy till we meet to part no more.

I had the best of them all…. you were everything and forever will be.

Guinee was a young mentally challenged man in the neighbourhood. I remember as a child how you tell us how he was once a very intelligent and vibrant immigrant from Cameroon who spoke fluent French. He was your friend, especially because he found someone he could communicate with, in French without hassles. You never forgot that Friendship despite the fact that he went into drugs and became destitute. You’d serve him meals many times and ask Sade, our Nanny to take one of us along and give to him. You always told him you won’t give him money because he’d use it for drugs but you will give him any other assistance he required within your means. Even in his state, you had conversations with him and he listened. Mon Mere! That is my Mum, kind, firm, generous, loving, loyal,

content, courageous and truthful. No one who ever met you would have grey areas about your person.

You were forthright and always true to your words. You were an advocate of self-discovery and self-love. You thought us to love being Yoruba/African and be proud of it. You also thought me that acquiring knowledge of other languages and cultures is a strength. You thought me to love me for me and also

love people ‘. .. just because .. ‘. I love you so much, Mum. I can’t put it into words. You always said, “Olorun o ni je ki a mo iyi ara wa”. Now I know the meaning of that saying. Never will I say Adieu, because you live on in my heart.

I love you mum- that’s the much I can say. There’s nothing else to add to it. If I had to start writing as regards my memories of you, it sums up love because that is all you ever gave. Your selflessness is one that is still a mystery to me. Mum, I love you and I never thought the word goodbye will come between us.