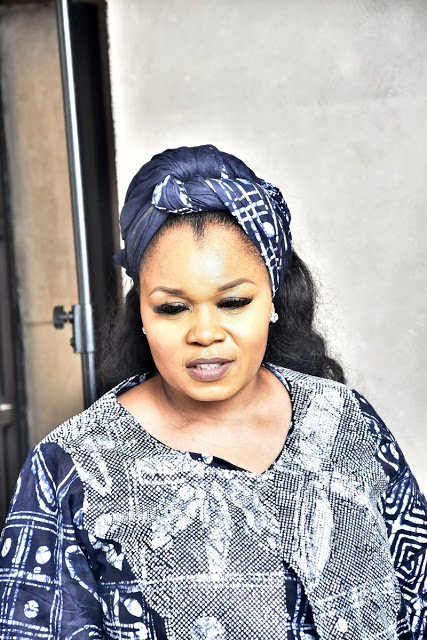 Celebrity babes turned out in large numbers on Friday 21st February, 2020 when the Queen of Make up, Banke Meshida and her siblings gave their dad a befitting burial in Lagos.

The family gave gratitude unto God for a life well spent as members, colleagues and friends gathered to celebrate the life and times of  late Professor Ebenezer Ajibola Meshida, a rare gem, and of father of celebrity makeup artist, Banke Meshida-Lawal. The deceased was survived by his wife, Funmi Meshida and his children. They were all at the Dads burial.

The event, started on Thursday with a Wake keep service at the Chapel of healing cross, Idi Araba and the church service also took place at the Chapel of the Healing Cross, Idi Araba, Lagos, where the 2008 Nigeria LNG Prize for Science winner was eulogised and repose of his soul prayed for.His remains were thereafter conveyed to the Ebony Vaults, Ikoyi for interment. A sumptuous reception followed immediately at the Shell Hall, Muson Centre, Lagos, where guests were lavishly entertained with the best of cuisines, choice beverages and orchestra performances which the deceased scientist loved during his lifetime.

The women looked beautiful in the Navy blue Aso Ebi chosen for the occasion. The Aso Ebi was different from the normal lace or Ankara people chose for parties but Banke went all the way and picked the new fabric trend in town, ADIRE as Aso Ebi and it was matched with a navy blue Aso Oke which was worn by every big babes and women at the party.

The event was a classy one. Many society women, from Corporate world and society ladies, mostly those who are her part of her clientele stormed the party. Banke Meshida has a legion of celebrities who are so loyal to her brand that hardly will any week pass by and they will not get her to do their make up This was evident at the party as many of her clients were all up and doing at the party.The Aso ebi colour was navy blue knowing her to be someone who loves cool colour, what do we expect from the grand burial if not, style, fashion and some trends that will set the tone for year 2020.

Banke Meshida’s father was a well known Engineer in his life time. The celebrated Geologist, scientist, Professor of Engineering, Prof. Ajibola Ebenezer Meshida was the winner of 2008 NLNG prize for Science. He died on Saturday, December 20 in Lagos after a brief illness. He was aged 78.

Before his death, Prof Meshida was the recipient of many other awards and had worked with a number of international organisations. In 2008, Meshida clinched the Nigeria LNG Prize for Science, also known as the Nigerian Prize, for his life work.Eleven years after Meshida won the award, he moved to Afe Babalola University, Ado Ekiti from his erstwhile University of Lagos base.He is survived by his wife, Funmi, a radiographer, 6 children – Kunle, Bukky, Bolanle, Banke, Gbenga, and Tosin, and many grandchildren.

Banke is is one lady who has done well for herself in the beauty industry, No wonder, she remains unarguably the No 1 make up artist in Nigeria behind the popular BMPro brand. She is the make-up artist on speed dial of celebrities and stars worth their salts, as she doesn’t come cheap at all.

The event also had some side attractions as their late father is known to be a music lover and Violinist. His children took turn to perform on stage for guests. First to perform was Kunle, while  Gbenga took his turn, then Banke and her sister, Bukky with 2 other family members did a quartet orchestra in loving memory of their father. The event was compered by popular MC and comedian, Tee A, while over 10 vendors attended to guests.

The Aso Ebi for the event was ADIRE, and it took center stage as everyone showed up in different styles. Gone are the days when ADIRE was just a boring fabric but the fabric has come to stay and more embraced by lot of women. Adire textile, pronounced as Ah-DEE-reh is an age old indigo die textile indigenous to the Yoruba tribe whose textile is rich in beauty and culture as much as it has a rich history. It was the navy blue colour that was picked which has some white patches matched with navy blue Aso oke. It is now made in a modern way, be it in chiffon ,silk and cotton, many blended it up by adding fabrics, stoning and embroidery which further brought the beauty out.