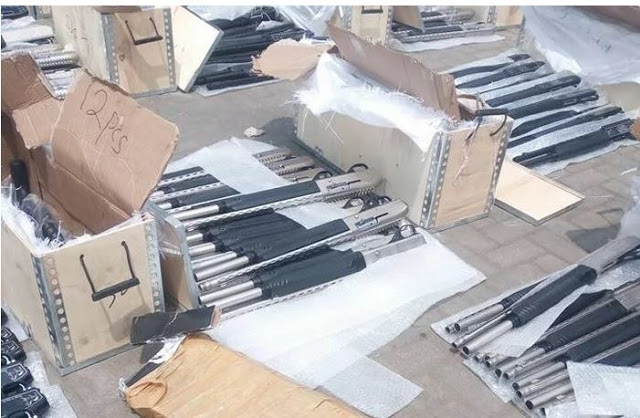 In a press statement delivered by the Comptroller-General of NCS Hameed Ali at a briefing in Lagos on Monday, January 30, the outfit said the guns were intercepted on Sunday, January 22.

“The truck was immediately taken to the premises of FOU Zone A,Ikeja where Physical examination revealed 49 boxes containing a total number of 661 pieces of pump action rifles concealed with steal doors and other merchandize goods.”

The Customs clarified that the actions of the importer contravened the provisions of the Nigerian laws and it is even more so given the fragile level of security in the country at the moment.

It added: “These Rifles are under absolute prohibition; therefore its importation is illegal. Such deadly contravention of the law is even more unacceptable considering the fragile security situation in some parts of the country.”

The Customs confirmed the arrest of three people in connection with the importation of the large arms. They suspects’ names were given as: Oscan Okafor (Importer) age 51, Mahmud Hassan (Clearing Agent) age 56 and Sadique Mustapha (who accompanied the consignment to its destination) age 28.

Hameed Ali says more arrests could still be made as an investigation has been opened into the matter.

He said: “Investigation has already commenced and I have directed that the drag net should be wide enough to fish out all persons involved in the importation and clearing of the consignment. Already, the Officers involved in the clearance of this container are with the Comptroller FOU Zone ‘A’Ikeja.”

Why Many Celebs Come To Me For Their Hair- Celebrity Hair Stylist, JOHNNY, CEO JOHNNY Saloon Speaks