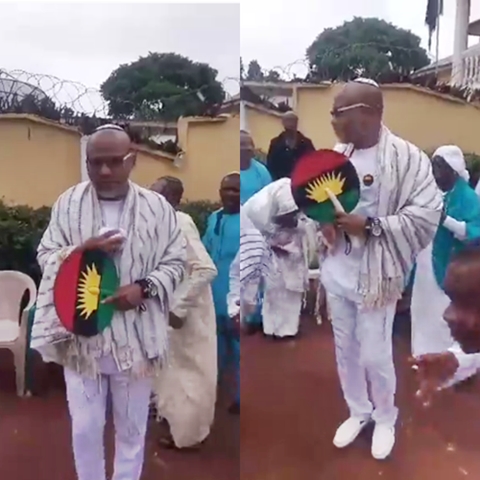 The leader of the In­digenous People of Biafra (IPOB), Nnamdi Kanu, has de­clared that nobody could stop him from visiting Lagos State if he wanted.
Kanu who spoke exclusive­ly to The AUTHORITY in Umuahia was reacting to threats by some individu­als and groups that his safety is not guaranteed in Lagos even as rumours are rife that Kanu is planning to storm the commercial city.
The Biafra activist said his inalienable right of freedom of movement could not be limited by anyone or scarified on the altar of mere threat, add­ing that threats only em­bolden him.
“I go to anywhere I want to go. I don’t listen to threats. They motivate me rather than dampen my spirit. That thing people say I cannot do is what I love to do. When the time comes I will go to Lagos if I have to go to Lagos.”
Asked if his much- talk­ed- about visit to Lagos was by any invitation or only meant to prove his temerity, he simply said “I am not under obligation to tell you”, but quickly added that “I have friends with connections in Lagos”.
READ ALSO: How Gov. Ambode will Deal Decisively with Nnamdi Kanu If He Tries to Hold Rally in Lagos – Lawmaker
“Fani Fayode is my friend and he is in Lagos. If I try to visit him in Yoruba land, then I must see him in Lagos”, Kanu said.
On the possibility of his being re- arrested for al­leged flouting of his bail conditions, Kanu said he was not afraid of being re­arrested, adding that such development would only facilitate the actualisation of Biafra.
“If you arrest me, Biafra will come even quicker than we anticipate. I am not afraid of being ar­rested. I have been there before and if need be I will also be there again.
“I will be very happy if they re-arrest me. If we are hoping for 90% compli­ance with the boycott of Anambra State Governor­ship election, my arrest will make the compliance 100 %.
Nobody Can Stop Me From Visiting Lagos – Nnamdi Kanu was last modified: August 8th, 2017 by Arinze Ago