Home News We Are Not Against You- Zuckerberg Assures Trump
News 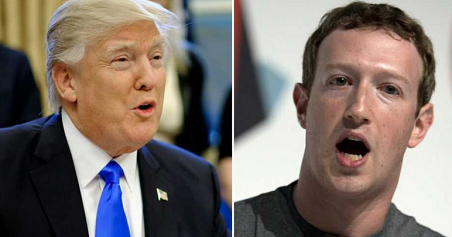 Facebook founder Mark Zuckerberg has dismissed comments made by Donald Trump that the site has always been against him.

The US president accused the social network of “collusion” on Twitter, branding it “anti-Trump”.

He made the same claim against the New York Times and the Washington Post.

Facebook will shortly hand over 3,000 political adverts to congressional investigators probing alleged Russian meddling in the US election.

The site believes the ads were probably purchased by Russian entities during and after the 2016 presidential contest.

Facebook, Twitter and Google have been asked to testify before the US Senate Intelligence Committee on 1 November about the allegations of Russian interference.

Facebook and Google have confirmed they have received invitations to attend the committee hearing, but none of the social media giants have yet said they will be present.

We Are Not Against You- Zuckerberg Assures Trump was last modified: September 28th, 2017 by Reporter

I Was Target Of Olubadan Palace Gun Attack- Ladoja