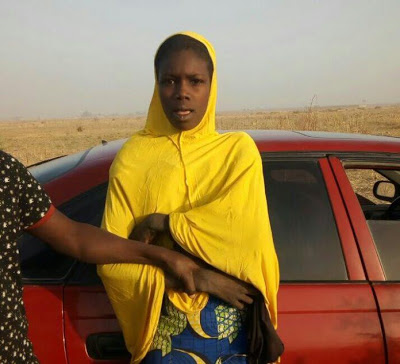 Two female suicide bombers believed to be around 18 years were intercepted on Tuesday who was targeting motorists at the NNPC Mega station in Maiduguri, Borno Station. (one of the girls pictured above). A spokesman for the Borno State Police Command, Victor Isuku, who confirmed the incident said one of the bombers was shot dead while trying to escape.

“Today 7/2/17 at about 0700hrs, two female suicide bombers about 18yrs old, were sighted behind Mega filling station in Molai area, while attempting to infiltrate Maiduguri town. They were intercepted by security personnel on duty. One was arrested and the other one was shot dead. Explosive Ordinance Device, EOD, personnel were quickly drafted to the scene and rendered the area safe”