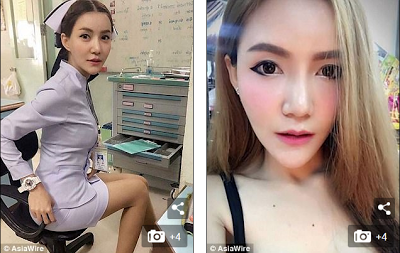 A nurse was forced to resign after ‘bringing shame to her profession by wearing an ‘overly Sexy uniform’ at work. Parichat ‘Pang’ Chatsri, 26, was made to quit after a photo of her at a private hospital in Isan, Thailand, went viral on social media.

She was pictured in a tight-fitting lilac uniform with a short skirt that looked purpose-built to show off her slim figure.

The uniform was far from outrageous by western standards, but it was regarded as provocative in Thailand. Critics accused Ms Chatsri of dressing inappropriately and disrespecting the nursing profession.

The photograph went viral after it was shared on the social media page of a group called the Thai Nurse Lovers Association.

‘I explained to the board at the hospital but they have high regards for the hospital’s image,’ she explained. ‘I understood them, and I didn’t want it to be a big deal. So I took responsibility by resigning. ‘I’d like to apologise to the Thailand Nursing and Midwifery Council and the hospital. I don’t want the public to judge all nurses based on my image.’

By resigning, Ms Chatsri said she felt it was her responsibility to protect the reputation of both the hospital and the profession.

She added: ‘I do not want trouble. It happened and I was responsible. I need to improve myself.’

Nurse Forced To Resign After Wearing ‘Sexy’ Uniform was last modified: May 23rd, 2017 by Arinze Ago