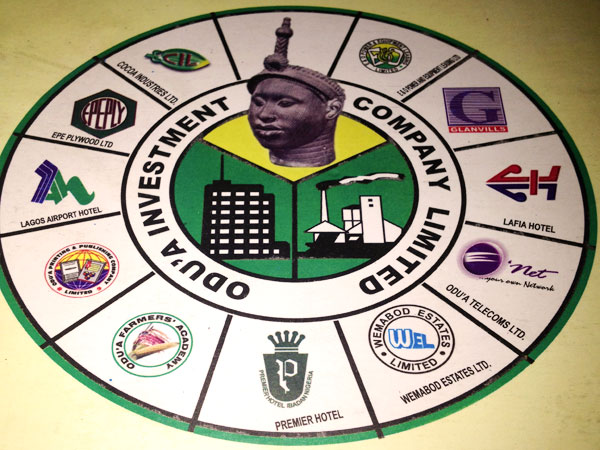 Odu’a Investment Company Limited, otherwise known as ODU’A, was incorporated in Nigeria as a limited liability company in July, 1976. it took over the business interests of the defunct Western State of Nigeria. The company commenced operations on the 1st October, 1976.

On Tuesday, December 8, this year, ODU’A Investment Company Limited celebrated its 40th Anniversary with a public lecture/awards  presentation at one of its subsidiaries in the hotel / catering sector, Premier Hotel, Mokola Hill, Ibadan, Oyo State. The highlight that day was the awards presentation to the three former military governors of the founding states of ODU’A (Oyo, Ogun and Ondo), retired Major-General David Medayese Jemibewon, CFR, retired Group Captain Ita David Ikpeme, CON and retired Major – General Saidu Ayodele Balogun. The three retired military officers deserve the recognition for the pioneering efforts, much as the brilliant and dedicated civil servants who crafted and operated the policy papers that gave birth to Odu’a Investment Company Limited.

No one can make an omelette without breaking eggs, as the present is a child of the past. This piece, or filler, if you wish, on titled “ODU’A at 40: The missing pages” is intended to fill the ‘missing’ pages (actually facts) in the 34 –page 40th Anniversary brochures (ODU’A history inclusive) distributed to the public at the Thursday, 8th December, 2016 ceremony. The miss, I am convinced, was in advertent and not meant to slight anyone.

First, I commend the sense of history of the ODU’A Board, Management and Staff, particularly the Corporate Affairs Department, which I had the good fortune of setting up on August 7, 1989,when I assumed duty as the conglomerate’s pioneer Public Affairs Manager. Even though, I voluntarily retired as ODU’A pioneer General Manager, Corporate Affairs in 2006, there still exists a healthy relationship between the patrimony and my humbleself.

So, what are the missing pages in the 40th anniversary brochure? Here they are. The brochure ought to have contained the fact that the present day ODU’A is actually the fourth (4th) ODU’A as it were. The first ODU’A being the forerunner, Western Nigeria Development Corporation (WNDC) established by the defunct Western Nigeria Government led by its first premier, the late Chief Obafemi Awolowo (1952 – 1959) and ably sustained by Chief Awolowo’s successor, the late Chief Samuel Ladoke Akintola from (1959 till January 15, 1966,when Nigeria’s  first military coup terminated civil government in the Region and Nigeria in general.

Chief Awolowo, led an economic mission from March – April 1956 to London, Washington, New York, Ottawa, Montreal and Toronto. The aim was to attract, and it, indeed, attracted, foreign investors /industrialists to the Western Region of an emerging independent African country (Nigeria) blessed with abundant natural resources and manpower.

The ‘second’ ODU’A was another forerunner known and called the Investment and Industrial Credit Corporation (IICC) which gave way to the ‘third’ ODU’A  on October 1, 1976. it was the ‘third’ ODU’A that received several knocks from the idealogically –differing civiliangovernors of old Oyo State (the late Chief ’Bola Ige of the defunct Unity Party of Nigeria (UPN), the late Governor Bisi Onabanjo (UPN) of Ogun State, the late Chief Adekunle Ajasin (UPN) of the old Ondo State and the former Governor Victor Olunloyo of the National Party of Nigeria (NPN) of old Oyo State.

ODU’A III was rescued from the slaughter slab by the 31st December, 1983 military coup of rtd General Muhammadu Buhari/ the late General Tunde Idiagbon, as the UPN / NPN governors of ODU’A states were crossing the ‘t’s and dotting the ‘i’s of the conglomerate’s dissolution and sharing formular.

The succeeding military governments of the then Lt. Col. Oladayo Popoola (old Oyo State) whose Press Secretary, I was; the then Colonel Oladipo Diya (of Ogun State) and the late Commodore Bamidele  Otiko (Ondo State) in January 1984, picked up the pieces of ODU’A left  and raised it up.

The fourth ODU’A wobbled and fumbled on the business lane and dividend returns to her owner – states and people, till the dissolution axe fell on it and its Northern Nigeria counterpart, the New Nigeria Development Corporation (NDDC) by a military fiat contained in that infamous broadcast of retired General Ibrahim Babangida, the former military president of Nigeria in 1990, shortly after he was rattled by the almost- successful military coup of the late Major Gideon Orkar on 22nd April, 1990. Babangida’s dissolution order on “regional / primordial economic interests, which  enabled states to meet on common platforms” was ignored by the NNDC, as our inquiries at its Kaduna headquarters revealed.

ODU’A, immediately complied with Gen. Babangida’s order, as the owner – states military governors had a non – Yoruba as the most senior, even though he had a Yoruba surname). A Board of Trustees, headed by the late Oba Oladele Olashore of Iloko  – Ijesa, Osun State, (then a prince and private banker) was set up, and immediately commenced action that opened the ODU’A bids to ALL Nigerians, whereby states / persons could buy / possess ODU‘A’s assets. The late General Joe Garba sought Epe Plywood Industries, one Alhaji Lawal Mohammed coveted Cocoa Industry Limited, Ikeja and so forth and so forth.

ODU’A escaped the Babangida dissolution axe by the grace of God and the personal intervention of the late M.K.O Abiola, at my instance. It was an escape from the sharks jaws. Phew! All these facts are contained in a book of ODU‘A’s evolution commissioned by a former Board of the conglomerate led by the gentleman, former Minister of Health, Prince Julius Adelusi – Adeluyi, a  former broadcaster, pharmacist, lawyer and polygot.

Owing to space constraint, let me conclude this gap filler by asking the following recordbreakers in ODU‘A history, who were missing in the anniversary brochure to pleasure take a bow – lawyer and entrepreneur Chief Kola Daisi, Bashorun of Ibadanland, who was the prioneer Chairman of ODU‘A and Chief (Mrs.) Iyabode Apampa, the first and only female Chair of ODU‘A. May the souls of the late Mr. C.S.O Akande, the pioneer Group Managing Director of ODU‘A and that of the late Otunba Mohammed Jobi – Fele, the undisputable yeoman of the team between 1997 & 1999 that rescued and  repositioned ODU‘A continue to rest in peace. Amen.