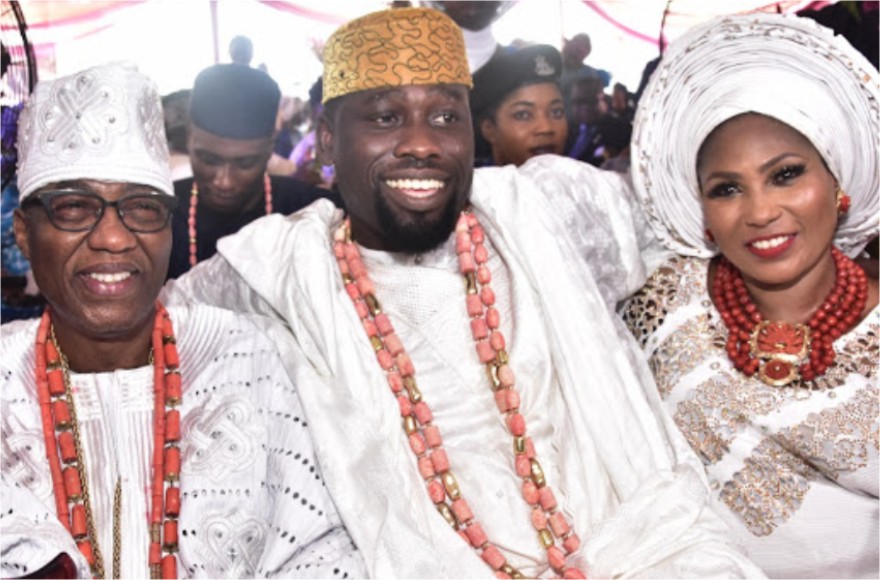 Details Of Grand Event In LAGOS

All roads leading to the mansion of Engineer Segun Mahmud on Plot 7, Adamo Close Off Oba Amusa Adebambo Street, Agungi, Lekki were filled with exotic automobiles of many kinds on Thursday 5th of March 2020 as Nafisat Mahmud wedded the first son of former Ogun State Governor, Otunba Gbenga Daniel in grand style.

The much talked about wedding kicked off with a classy introduction and engagement on the 5th while the grand reception took place at Queens Park, Ligali Ayorinde road, Oniru, Lagos.

City People Assistant Society Editor, ABIOLA ORISILE was at the grand traditional engagement to serve you hot, spicy gists. Below are excerpts of the report.

WHY THE TRADITIONAL WEDDING WAS  NOT HELD IN A HALL

While many high and mighty guests of Otunba Gbenga Daniel made their way to Agungi where the traditional wedding of Olurotimi and Nafisat was held, many couldn’t help but ask why the event was not held in a hall in Lekki due to a large number of guests. Well, permit us to inform you that Edo tradition demands that you must have a traditional wedding at the abode of the bride’s parents. It is Edo tradition. Of course, OGD would have had his way if he wanted to have the event in the hall but out of respect for tradition and belief, he allowed the Mahmuds have their way for the traditional engagement.

At exactly few minutes past 11 am, an entourage of luxury automobiles in dozens made their way to Agungi for the traditional engagement. The proud father, Otunba Gbenga Daniel is known for sticking to time.

Though the event was supposed to start by 12pm, he was already around before then with his friends and political associate to seek the hand of Nofisat in marriage for his first son, Olurotimi.

Though Yeye Olufunke Daniel has always carved a niche for herself as one of the most stylish South-West First Ladies right from when he was in office but the pretty ageless former Ogun First Lady looked many times younger as she stepped out of their glittering Jeep with her handsome hubby.

Looking stylish as usual in white aso-oke, she was filled with joy as her son Olurotimi tied the knot with his best friend. Just like every groom’s mum, she was so eager to see how pretty her daughter-in-law looked for the D-Day as they awaited the arrival of the bride during the Nikkai.

There is no doubt that Yeye Olufunke Daniel adores her daughter-in-law as she dazed many when a fake bride was presented to her as Nafisat during the traditional engagement. Without unveiling the fake bride, she said, “this is not my daughter-in-law, she beamed with a smile throughout while the event lasted.

THE HARMONY AND LOVE IN THE DANIELS FAMILY WASN’T UNNOTICED

Give it to the Daniels, there is nothing like having a perfect family like the Daniels and the harmony in their family was so obvious at Olurotimi’s wedding. Not only did all of them come out, they all came with their friends to show love to their elder brother. The baby of the house was one of the groom’s men while the only daughter was up and doing throughout the event. To say that Otunba and Yeye Olufunke’s children are exceptional silver-spoon kids was obvious as they were very involved throughout.

AND THE LATEST COUPLE LOVE UP

One needs not be told that Nofisat and Rotimi Daniels are so entangled in their love for each other. They couldn’t take their eyes off each other as they were joined in holy matrimony. When Olurotimi stepped out in his 2nd outfit for the traditional engagement in white flowing Agbada, he curiously looked through the entrance to await his bride Nofisat. Of course, he wasn’t kept waiting for long as Nofisat walked in an Edo bridal outfit.

AND THE EVENT KICKS OFF WITH NIKKAI

At exactly few minutes past 11 am, top Muslim clerics of the Mahmud joined Nafisat and her handsome hubby according to Sunnah Anobi. The pretty bride looking like an Edo Princess that she is was walked into the venue by her father, Engineer Mahmud. Tall and pretty Nafisat was the cynosure of all eyes in a sparking white hand-cut lace matched with a luxury diamond earring. She was joined according to Sunnah Anobi at few minutes to 12pm.

The love birds were also cynosure of eyes in their 3rd outfit when Nofisat stepped out in an off-shoulder luxury blouse and iro matched with 21-carat Saudi gold. While her hubby was spotted in cobalt blue Edo grooms attire. They were endlessly gazing at each other and beaming with smiles while the event lasted.

THE BRIDE NOFISAT GET A NEW NAME RUTH

Though the bride was married according to Islamic faith but after the traditional engagement which were both anchored by 2 popular engagement anchor, “Sokoyokoto (for groom’s family) and Sir K (bride’s family), the Daniels announced that the bride will be called “Ruth”.

AN ARRAY OF OGUN OBAS

Not many know that popular Ogun School owner, Chief Mrs. Anuoluwapo Bankole, the brain behind 28 years old Mercyland is related to Otunba Gbenga Daniel. This became obvious few days ago when she stormed Lagos to honour her cousin as her son tied the knot. The beautiful and stylish wife of Premier Paint boss stood out as she chatted freely with Oloori Bisi Barakat Akamo, the wife of Olu-Itoriland.

AN ARRAY OF PDP MEMBERS

Many who were at the traditional engagement were not surprised that Otunba Gbenga Daniel spent that much to make sure his son’s wedding was a huge success. It is not just that it is the first wedding of his children, he is also known not to do things in small measure. Just like his other children, Olurotimi is said to be of good character. He is also one of the closest to his father. Aside this, all OGD’s sons are well behaved. This was one of many reasons why he vowed to make sure any of his kids who has done him well in their education must also get the best wedding. The executive band performed while many celebrity food vendors, drink vendors catered for the large guests.

MAMMUDS AND DANIELS BECOME ONE

It was very obvious that the groom’s father has not only gotten his first daughter-in-law, he has also found a daughter in Nafisat Mammud. He was in joyous mood with the groom’s mum, Yeye Funke throughout. He was seen at interval hugging the bride’s father saying “thank you” as the groom’s mum did the same. Even all the siblings of Olurotimi haven’t stopped posting Nofisat’s pictures on their handle while they say beautiful things about her.