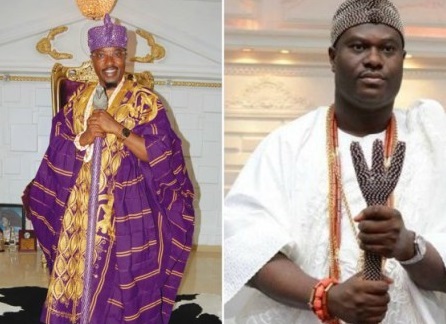 The Oluwo of Iwo, Oba Adewale Akanbi, is presently attending a meeting of the Osun State Traditional Rulers Council Meeting at the palace of the Ooni of Ife, Oba Adeyeye Ogunwusi.

Oluwo has never attended the meeting since he ascended the throne almost the same time as the Ooni in 2015.

It was gathered that some Obas had, during the last meeting held on July 4, 2017, raised the issue of the Oluwo and they resolved to go to Iwo to prevail on him to attend this meeting.

The Olojuo of Ido Osun, Oba Aderemi Adedapo, who is the secretary to the Council of Obas and about 40 other traditional rulers were in attendance.

The Ooni, who presided over the meeting, prayed for the monarchs and the towns each of them presides over.

Oba Ogunwusi said, “It has been long since we held this meeting. The meeting is usually held on a monthly basis. This is not the time to point accusing finger at anybody.

“The Timi (of Ede) came to me and told me that he would not be here because he was traveling out and that he had scheduled the trip before the meeting was called. So also is the Orangun of Ila.