Home News One on One with Queen Abosede, Tessy Sho, CEO of Abinbin F.M at Atlanta Georgia.
News

One on One with Queen Abosede, Tessy Sho, CEO of Abinbin F.M at Atlanta Georgia. 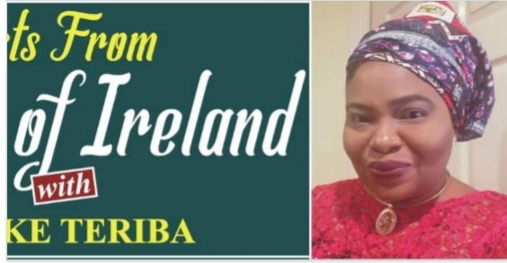 During her Secondary School days, she had a childhood friend who shared the same passion and usually invited to rehearsals, whenever a theatre group was in town. Against her Fathers wishes, she continued to attend Yoruba theatre drama rehearsals. Unfortunately for her, she received a lot of beating for her passion, but she would never forget the day she was caught for returning home late from one of such drama rehearsals, which got her dad very upset. And in the event of being beaten for disrespecting her dad’s wishes always, she received lots of Koboko beating, so much so, she fainted and ended up in an hospital. But that did stop her as she had so much passion for acting. Rather, she decided to be more cautious in order not to get caught again.

After completing her Secondary School, she travelled with which ever drama groups that were available with her childhood friend to perform stage plays, continuously. Luckily for her she featured in a movie title Osan Gan – gan, some years back. Although she said, the movie should be on YouTube, but a lot of people might find it difficult to recognise her, because she was so skinny and tiny looking back then.

The acting career brought her places, and she also got to meet and watch some of Mount Zion drama rehearsal and got familiar with the group.

The stage and theatre performing passion was short lived, because her Father wanted her to further her education. Although during the period she stopped the worldly acting, as her father would always refer to it, but her father didn’t dispute her being a member of her Church drama group, but he was totally against every other drama or theatre group she joined or worked for.

Also, she developed the interest for talk show, with now stuck to her over acting, when late Kola Olawuyi started a talk show programmed titled Irinkerido Omo Akolawole,  Ikan be, of which Dr. Bayoanle worked for Late Kolawole Olawuyi alongside Yinka Ayefele being a back Stage performer. before he came to limelight years after the death of his Boss.

With all the above mentioned, she later decided to grant her Father’s wishes to further her education and proceeded to sacred heart’s Nursing School at Lantoro in Abeokuta, in Ogun State to major in mid-wife Nursing career. During her nursing school days, she joined a theatre group called Ibile theatre group just to continue to fuel her passion, for both church acting which was in her father’s favour and the worldly acting which her father frowns at. Not excluding out her new passion for talk show entertainment.

After successfully graduating her mid-wife nursing career, she worked in a big hospital in Abeokuta before relocating to Lagos state, to continue goggling between her Nursing career and enterteinmemt passion.

Where does Queen Abosede see herself in 5years?

Queen Abosede said God willing and keeping each and everyone of us alive, healthy and kicking, she prays for God’s guardians, guidelines to expanded her dreams in the entertainment and Radio and T.V talk show industry, encouraging  herself to improve and do astonishing better.

Least I forget, the Radio and T.V talk show had also opened opportunities for Queen Abosede in  areas of anchoring parties and events of all sorts as an M.C. Queen Abosede says she gives all the Glory to God for her journey so far, from Nigeria to United States and especial her country of residence, Atlanta Georgia.

Where have worked as a talk show presenter or entertainer ma?

Queen Abosede had worked with so many radio stations both home and abroad. But worked alongside Late Kolawole Olawuyi, of blessed memory and Dr. Bayonle Olaniyan, who were both her senior colleagues at Radio Nigeria for so many years.

The list of a Radio Stations Queen Abosede had worked, are as follows:

6.       Root Radio Station in the United States for some years.

Although during all her days of working as a radio and talk show presenter /entertainer, most of the bosses she worked for, always trusted her to work with her own discretion with little or no dictatorship.

Queen Abosede decided to become an Entrepreneur her own Radio and T.V talk show presenter about 3 years plus, ago. After working at Root Radio station lastly as Radio and talk show presenter for some years. She started her own live broadcast on, YouTube, Instagram handle and IG T.V Live Stream as Tessy Sho. And Tessy sho Entertainment and fans club or Iyalode Amuludun Tessy sho on Facebook. On twitter account is Abinibifm. Queen Abosede happens to be a Director, Presenter, Producer and Songwriter.

On Thursdays at 2 pm Atlanta time, she hosts a programme titled “Arankenge”

Abinbin F.M is her latest invention, which she had been working on for over a year and half. Which she gave birth to and launched to limelight for the public enjoyment during the Month of March, 2020.

With the birth of her Radio Station, www.abinibif.m.com comes more responsibilities. And her list of the programme didn’t just increase in numbers, but there’s are programmes and activities, scheduled for most days of the week.

The new list of programmes on Abinibi F.M goes forth:

Among Queen Abosede’s achievements, is her Abinibi School of Entertainment which is situated in Ibadan, Oyo State of Nigeria. Where students are learning to become Radio and talk show Presenters.

Queen Abosede also has an NGO, a Charity Organisation called The Resource Centre for family and women Empowerment.
Which is based in Nigeria and licensed both home and abroad? The NGO operates in Ibadan, Abeokuta, Lagos and Kwara. Also in the USA, here in Atlanta. Maryland, and also in D. C. Washington.

One on One with Queen Abosede, Tessy Sho, CEO of Abinbin F.M at Atlanta Georgia. was last modified: June 7th, 2020 by Reporter