Home News How The OONI Of IFE & I Grew Up Yrs Ago In IBADAN –  Oluwo Of Iwo, Oba AKANBI, Goes Back Memory Lane
News 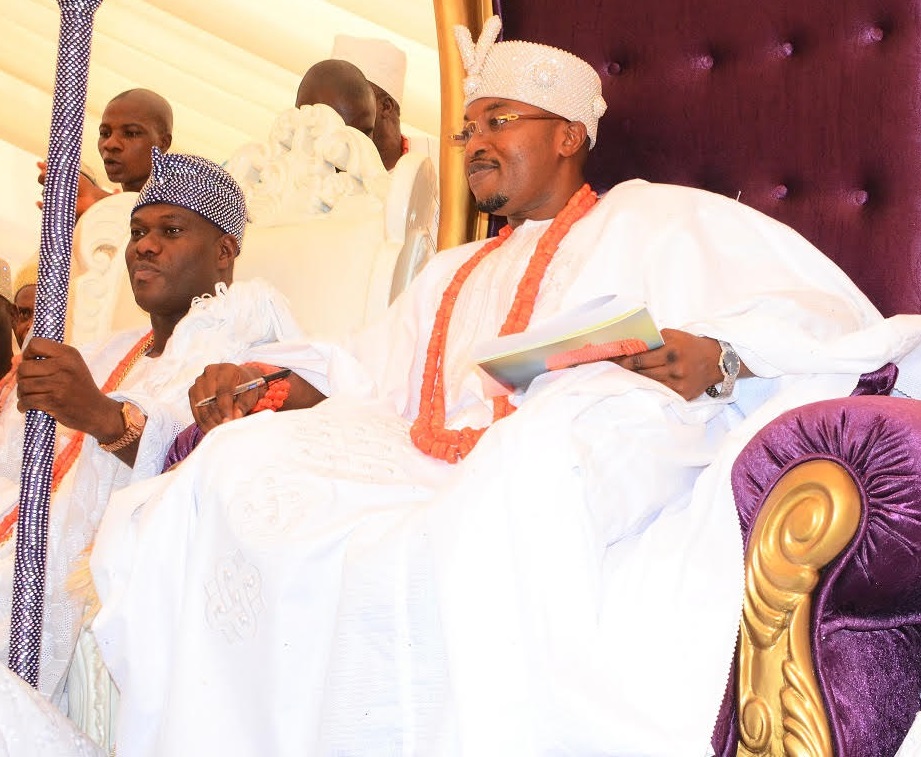 Many people don’t know that the Oluwo of Iwo, Oba Abdulrasheed Akanbi and the Ooni of Ife, Oba Adeyeye Ogunwusi grew up in Ibadan together, in those good old days when men were boys.

The two families were close, as they lived side by side.  In this interview with City People Publisher, Seye Kehinde, he reveals a lot about his past.

There is this story making the rounds that the figure 16 is significant to your becoming a king, is this true?

Me becoming a king is the will of God. It is what God wants, but sent me with a message specifically for this generation. You can see it in the signs. These are signs. Like the 16th ruler of Ife, Ooni Luwo Gbagida, who happens to have given Telu, the Crown, from Ife. He is the 16th Ooni of Ife. I am the 16th Oluwo of Iwo land. Take note of the figure 16.

What God is doing is showing us many signs. That is why my coming in this generation is actually what we can define. God has shown me a lot about life, about the mystery of life. I hope you know that there is no hell fire in the real sense of it.

The ways of God you can’t understand it. Look at the concept of hell fire. There is no physical hell fire. Why I am saying all these is for you to know that there is a likeness between the physical and the spiritual. I don’t do thingarejust in the physical. I do things from where the strength comes from.

Let’s talk about your growing up years. People say you grew up with Ogunwusi family in Ibadan; can your recall you growing up with them and even the current Ooni of Ife?

The life of a king is different from the life of Adewale Akanbi. I moved on. God has prepared me for this role because he made me go through a lot in life to prepare me for kingship. He made me travel round the whole world and in Africa, I have been to so many countries, I know about so many cultures.

When you look back, how do you feel?

When I look back I just say wow!  So God was preparing me for greater heights. I have been to many countries. I have lived there. God actually prepared me for this position. I believe now.

Kabiyeesi, let’s go back to the Ogunwusi, is it true Kabiyeesi Ooni and his brothers all grew up with you in Ibadan?

Tell us the story…’

(Breaks into laughter) why do you keep asking this question? We are talking about my life now, not Ooni’s life. We’ve all moved on. I have made my name. I have a life and I believe in the future that is sure.

He has also made his own name. So we should not be going back to start talking about how we grew up or not grow up. I don’t need to stand on anybody’s back to become successful. Oluwo is a household name now. And we thank God for that.

We give Glory To God. Why are you not asking me about other people, other families or others kings?

It’s because of the significance of two people who grew up together becoming kings in their later years. Can you take us back.?

Now you’ve won. All I can say is that all these is just part of growing up. We can’t dig into that. Let me just say, yes we knew each other way back. Yeah. He is younger than me though.

I am 8 years older than him But we give glory to God.

What was the relationship like then? Did you play pranks together? Is it true you were closer to his brother, Tunji? Tell us the closeness of the Akanbi and Ogunwusi family.

Oh, yes! But I like to talk more about my life. I want people to learn from my own life, my own experience. In 1981, something happened and I had to leave Iwo. I left home and I was lost for 4 months. I was captured 2 times by Ritualists and both of them rejected me

I came around and helped my dad and I left again. I came for secondary school in Iwo. I was in Class 2 promoting to Form 3 at that time. That incident happened and I left when I got lost after 4 months I was found. The man who owns that building, out there, where Wema Bank is located was the one that found me at a petrol station in Lawanson. When I came back, my mother said you are not going back to Iwo again.

That was how I ended up with my uncle. It is not only in Akobo, Bashorun area of Ibadan that me and Oonis family lived together. We started from the area called Holy Trinity, Seventh Day Adventist area. At that time, we were living side by side, by Senator Soji Akanbi’s family house at Holy Trinity.

He was just a big boy then, who just came back from England. He didn’t want to talk to anybody. He would put his hands in his pocket and put his head up high in the air. He is the son of Alhaji M. Akanbi. He knows me good.

So, we have been close by then, but the family didn’t know each other at that time. But when I moved to my uncle’s place in Akobo, they were living just the street across. That was when we started knowing each other. We and Tunji played soccer together. Do you know Tunji Ogunwusi? The Primewater view,  Real Estate company owner?.

He was at St. Patrick’s Grammar School. Me, I was at Oba Akinyele Memorial High School. It’s almost a fence dividing us, just a few houses away. We used to go to school together and we came back home together.

We used to go to school together. Its just on that road, straight road from Akobo.

It was great growing up during that time. I was living with my Uncle called  (Uncle Onifade) Alhaji Raimi Onifade, he is a younger brother to my mum. That’s where I lived. That is where we got to know. We thank God that we are all great people today.  At least we’ve made an impact in Yorubaland.

One thing I want people to know is that the new dispensation of what kingship is all about is here and we thank God for it. And my own message to kings is for us to be servants. It’s not about money. It’s not about gathering money. There are many rich kings that have gone and they are no more.

How The OONI Of IFE & I Grew Up Yrs Ago In IBADAN –  Oluwo Of Iwo, Oba AKANBI, Goes Back Memory Lane was last modified: October 10th, 2017 by Reporter