Oshiomhole, Soludo openly attack each other over National Economic Plan 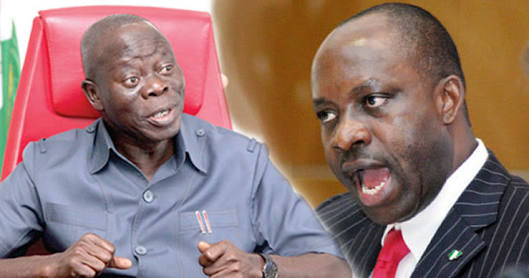 It was a war of words yesterday at the Vanguard Economic Discourse in Lagos when a former Governor of the Central Bank of Nigeria, Prof. Charles Soludo, and the immediate past Governor of Edo State, Mr. Adams Oshiomhole, engaged each other in heated argument, Daily Post reports.

Soludo, who gave a keynote speech on the topic, ‘The hard facts to rescue the Nigerian economy’, had earlier cited some of the areas President Muhammadu Buhari had failed, Vanguard reports.

Soludo said nothing much would be achieved with the 2017-2020 Economic Recovery and Growth Plan, which was released by the Federal Government last week.

His words, “Whose plan is it? Ownership will determine whether the plan is just a public relations document or whether it will be implemented. To what extent is the plan consistent with the APC manifesto, which promised a conscious plan for post-oil economy and to restructure the country and devolve power to units with the best practices of federalism? Is this plan that plan?” the ex-CBN boss asked.

He described the envisaged 15 million jobs to be created under the plan as a “very nice wish.”

“The plan as packaged is a good effort, but in terms of our expectations as a plan for transition to a post-oil economy as promised by the APC, it is a missed opportunity.

But in his remark, Oshiomhole fired back at the former CBN boss, accusing him of wrongly allocating millions of dollars to two new generation banks shortly before the naira was devalued.

He said, “I got some intelligence from my comrades who worked in the system and we found out that the CBN under Soludo had just allocated couple of millions of dollars to two, as they were then known, new generation banks.

“And I asked Prof (Soludo), if you were going to devalue by Friday, why did you auction dollar at a lower rate on Thursday? I accused Soludo, I said you have enriched these two young men to the tune of N8bn, courtesy of your internal abuse.

“When the regulator behaved in this manner, then the Nigerian condition is much more serious than we can appreciate it. We need to deal with issues of attitude.”

Irked by Oshiomhole’s submission, Soludo, slammed former Edo governor for trying to divert attention by reacting to issues that has nothing to do with him.

He said, “This debate has only begun. Adams made the point about exchange rate and exchange allocation to two banks. I want to say for the record that Adams Oshiomhole has lied. I didn’t say he misquoted anything; he has lied.”

“Every bid produced a different exchange rate and there were different winners at every bid. We didn’t do devaluation as the case may be; we had the currency depreciating as the market determined day to day. With all due respect, I think if you (Oshiomole) don’t know what to say, sir, just don’t get into this kind of personal allegation,” he added.

“Most macroeconomic variables have worsened in the last two years. Inflation from about nine per cent to 19 per cent; dollar exchange rate from about N197 (official) and N215 (parallel market) to now N305 (official) and N465 (parallel); unemployment from 7.5 per cent to 14 per cent; GDP from about two per cent to -1.5 per cent; poverty is escalating and youth agitation increasing; business confidence remains very low; foreign reserves remain depleted, and the current account balance is negative, and sovereign credit ratings have worsened.

“There remains half-hearted commitment to deregulation of petroleum pricing as well as the privatisation of refineries. The budgetary framework remains largely the same with all the institutional inefficiencies. Monetary and exchange rate policies were in their own worlds,” Soludo said.

“Nigeria has lost the first and second positions in Africa’s ranking,” he said, adding, “We will get out of recession any moment from now with oil price and output increasing. But it will be a miracle if the government is able to return the GDP in US dollar terms to the level it met, even in 2023.”

Soludo added, “While trying to tie down the chickens, we were either stopping the cows from coming in or chasing them away. For example, while we are fixating with stopping the import of toothpicks and stopping the petty traders from taking dollars away, we have created havoc that has shut down many factories and with low capacity utilisation as well as ignited massive capital flight with the attendant impoverishment of millions, escalating unemployment and inflation.”