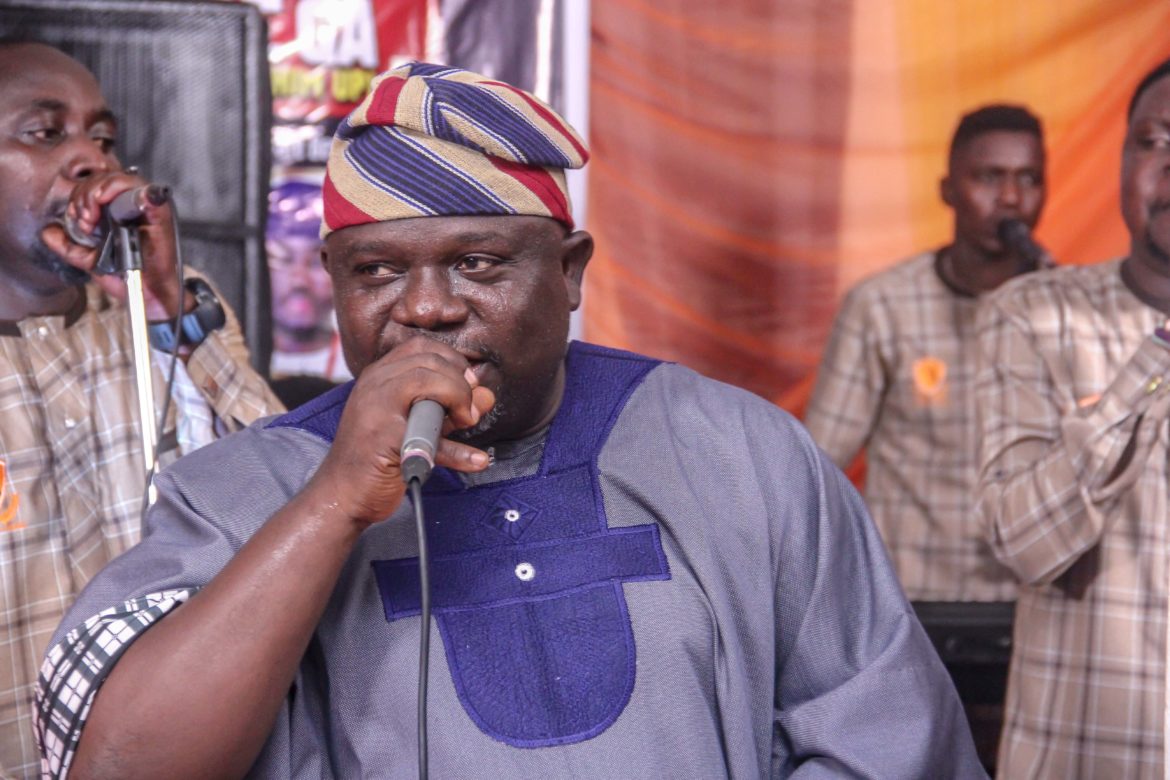 The memory of Sunday, November 17, 2019, will linger-on for many fans, family members, friends and colleagues of top juju gospel singer, Babatunde John Olaniyan popularly known as Olababs as he launched his maiden album entitled ‘E gbe ga,’ meaning lift him up.

The event which brought together many gospel acts held at the famous City People Event Centre in Gbagada, Lagos. It was not just about gathering money for the project, it was more about giving gratitude to God and a display of talents by many veteran gospel singers, as well as the fast-rising acts that came to celebrate Olababs. City People’s DAMILARE SALAMI (08155134152) was also there and in this report, he presents you a blow-by-blow account of the event for your reading pleasure.

When you talk of an anchor full of jokes, music, action and comedy; especially one who understands his audience and knows how to carry them along, Dare Best is one of the names that come to mind. He anchored the event before he was later joined by his co-host, MC Kirikiri. Their combination was the bomb. They thrilled the audience and added spark to the already colourful event.

Talented and fast-rising female gospel act, Oreoluwa Praise opened the event with a session of praise. She led other members of the band boys to an awesome moment of danceable tunes during the praise session. Though not so long a time, she maximized her session such that most of the already seated guests danced without considering their environment.

Many veteran musicians were in the building to show love for their colleague, brother and friend, Babatunde Olaniyan. There is no doubt that Olababs has been in the game for a very long time. Despite the fact that it was his maiden albums, so many of these musicians had many beautiful things to say about him, dating from when he started his music career about three decades ago till this present time. Asiwaju Dele Taiwo, Otunba Jesu Oludele, Sunday Ojajuni popularly known as Soul Winner, Lekan Omoba Orun, Sanmi Michael, Gabriel Abidoye (Beulah), Damola Adesina (Onibudo) and Kunle Adebayo (Kay Melody), a former Ikeja LG AJUMN Chairman were among those who registered their presence.

…ON THE HIGH TABLE

The golden boy of the day, Olabab’s entry was something anyone present at the event would love to talk about. Babatunde who danced his way to his special seat was accompanied by his beautiful wife, his mother and children. Baba, as he is fondly called, was the name on everyone’s lips as he displayed his dancing skills on his special day. He was serenaded by Oreoluwa Praise whose second performance outclassed the first which everyone had thought was her best.

Asiwaju Dele Taiwo has been on the Juju music scene for many years, dating back to the early ’90s. He became famous with his Funky Juju style and took the industry by storm performing from one show to another almost on a daily basis. Coincidentally, Olababs used to be a member of his Funky Juju Band as a drummer, Keyboardist and a guitarist. The duo has come a long way musically and otherwise, so it was not a surprise to see Dele Taiwo unveil his friend and brother’s maiden album.

City People Publisher, Dr. Seye Kehinde who is known for the supports he grants entertainers across the country was also on the ground to show love and support for Olababs. His words were very few but punchy as he shared his personal knowledge about the talents this multi-instrumentalist has displayed not just in the album but also at different shows. “Olababs is a very talented young man who knows his onus. He has worked very hard against all distractions to put these masterpieces together. Unlike many other musicians who are not well-rooted in music, Olababs is different. He has a deep understanding of music and has displayed it in his maiden Gospel-Juju album. Everyone who enjoys good music needs to get this and we also expect more from him after now” were the words of the veteran pen pusher.

It was the time everyone was waiting for and it was a special moment on the night as Olababs and his band members took all his guests on a musical sojourn. The band performance was indeed very special as it forced even those on the high table out of their position down to the stage to dance.

Starting from the most established acts down to the fast-rising talents in the building, every artiste registered his presence by dropping one or two hits to entertain the audience. It was not just entertaining, it was an evening of fun all the way as Jesu Oludele led the way. Sunday Ojajuniaka Soul Winner, Lekan Omoba Orun, Sanmi Michael, Gabriel Abidoye (Beulah), and Damola Adesina (Onibudo) all mounted the stage to drop their hits before bowing out.

Another talking point was the Kunle Adebayo a.k.a Kay Melody’s performance. He is a popular Juju musician, who is currently making waves in the industry. City People hosted him in 2018 in a colourful event that had many of his fans and music lovers in attendance and he was not ungrateful as he seized the opportunity to eulogize Dr. Seye Kehinde for his kind gestures.

Not only Kay Melody, all artistes in the house continuously sang the praise of the City People Publisher for his support towards them. Veteran singer, Soul Winner also made mention of SK’s relentless supports always.

The show ended with another top talent, Raphael Abidoye rounding off. His performance was splendid and he also took the opportunity to sing his latest single, entitled “Atorikan Sekan”.