Home News Prophecy: Atiku will be forced out of APC – Prophet Omale
News 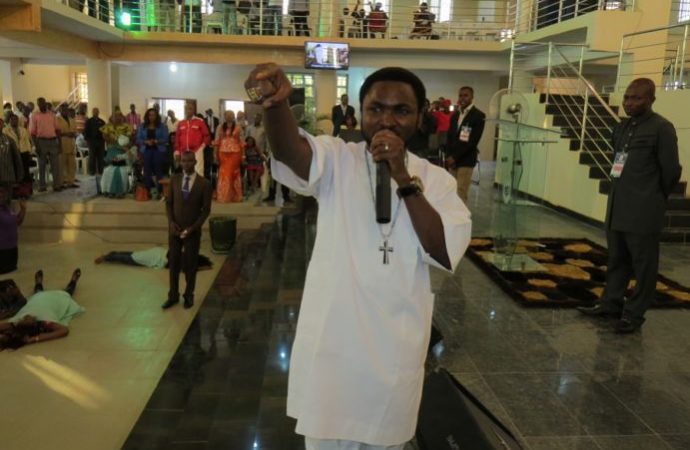 The head of the Divine Hand of God Prophetic Ministries International, Prophet Emmanuel Omale, has given series of revelations concerning the new year saying that God told him that former Vice President Atiku Abubakar, will “be forced out of the ruling All Progressives Congress (APC)”, even as he added that the party’s National Leader, Asiwaju Bola Tinubu, “may be poisoned.” even as he called for fervent prayers.

Reading out 2017 prophecies and vision God showed him in a statement on Sunday in Abuja, Prophet Omale, also said that if “President Muhammadu Buhari chooses the Mandela option, (that is, not to contest again in 2019), a very powerful man will be anointed by him from North West to rule after him.”

He also revealed that if fervent prayers were not said, the Ekiti state governor Ayodele Fayose “may face impeachment.”

He said God told him that the proposed Mega Party will not come to reality in 2017 added that aside two People Democratic Party (PDP) governors “cross carpet to APC,” another “South-South strong man who rose out of the walls will join the ruling Pparty.”

On economy, the man of God said Dollar will move from last year prediction of $350 to $570, even predicted that “No oil in explorable quantity will be found in the North, NNPC should seek the Divine Hand of God to know where to find oil in the North.

“I see peace in Nigerdelta, but Federal Government should make peace with former President Jonathan and his family to sustain that peace.”

While calling on the country to “pray against a plane crash in early 2017”, he also warned that prayer should be said “against Boko Haram efforts to create mayhem in Abuja: residents of Gwagwalada should be vigilant.

“January 27th keep ringing bells in my head, let us pray for ourselves, for our country, we deserve political stability to enable economic prosperity. Let us pray! There will be no shedding of blood.

“Let us pray for the health of a former President to avert bereavement.

“I see fire outbreak in Lagos and Abuja markets.

“I see changes in INEC Leadership

“Taraba should pray to avert a very severe Ethno-religious crisis.

“A very important Emir should pray against bereavement.

“A former Governor should pray against sudden death.

“I see massive oil spillage around Kogi that will lead to seven days fire.

“A Service Chief of one of the armed forces will be dropped.”

On international level, the prophet said he “foresee a massive typhoon in Thailand that may be worse than the last tsunami.

“The new Ghana President-elect should pray against liver and internal organ sickness after inauguration.

“Yahaya Jammeh will hand over to President-Elect Barrow.

“Jacob Zuma may still be in trouble, adding that “big tragedy will happen in China.”

“The English Queen should pray against life threatening health challenges.”

On sports, he said a “famous Nigerian Athlete should pray against injury that may end his career.”

The Prophet however admonished that some of these danger can be averted if serious prayers are done.

Prophecy: Atiku will be forced out of APC – Prophet Omale was last modified: January 2nd, 2017 by Arinze Ago