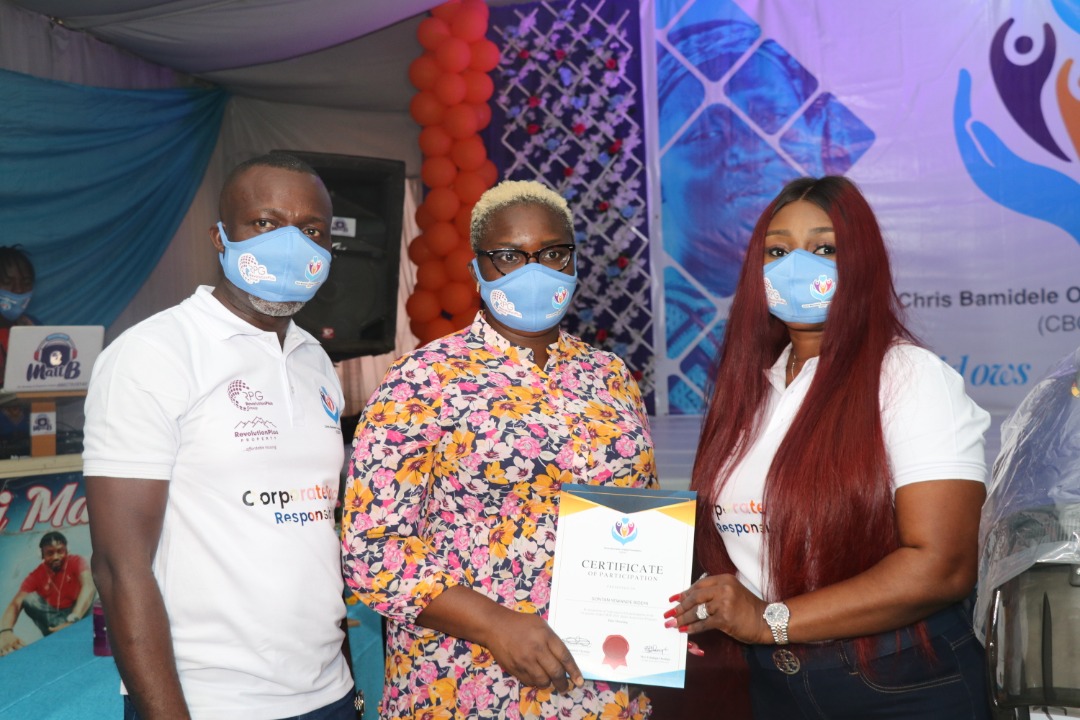 In yet another move, the Management of RevolutionPlus Group celebrated her Group Executive Director, Mrs. Tolulope Onalaja on her birthday by empowering over 150 widows in her 1st Quarter Widows Empowerment and Skills Acquisition Programme.

When asked why she choose to empower widows, Mrs. Tolulope who was born on the 14th of February said , “after all God had done for my company, I wanted to give back to the society through empowerment  but it was actually my husband who did this first when he  empowered 10 widows with 50,000 naira during his 45th  birthday. Seeing the impact the money had on them, I decided to replicate same last year when I clocked 40 by empowering 40 widows.

So this year we decided to make it bigger by empowering 1000 widows, but in order to reach a wide range of widows we  made it a quarterly affair and through the grace of the almighty God, it was a success”

The programme commenced with training of the women and then distribution of working equipment and cash to get them started. Some of the skills taught were soap making, tailoring, hairdressing and zobo making which were followed by the distribution of several gift items such as hair dryers, sowing machines, grinding machine and cash for the widows. Some of the recipients of these items worth millions of naira showed their appreciation saying they were grateful and didn’t believe that people who remember the needs of widows still exists.

This is not the first time, the Executives of RevolutionPlus Group, Mr. and Mrs. Bamidele Onalaja will be giving back to the community, just last year the organization went on a massive CSR campaign when they distributed food palliatives to over 1,000 households in Lagos and Oyo state to cushion the effects of the lockdown occasioned by the Coronavirus pandemic.

These Corporate Social Responsibilities were executed under the umbrella of The Chris Bamidele Onalaja Foundation, an NGO which is also a subsidiary of the RevolutionPlus Group.

In line with this vision, RevolutionPlus Property under the Chris Onalaja Foundation will be launching its #100 million Corporate Social Responsibility project which touches the establishment of a standard secondary school for TolDel graduating pupils and kids in the Ikorodu axis and community outreaches to all RevolutionPlus Property estates.

The Group Managing Director of RevolutionPlus Group and Chief Patron of CBOF, Mr. Bamidele Onalaja was quoted as saying, “My wife is the backbone to my success and my number one fan, she deserves nothing but the best. Since day one, she has been the force behind the success of RevolutionPlus Group and only God can reward her; happy birthday darling”

REVOLUTIONPLUS GROUP EMPOWERS OVER 150 WIDOWS IN CELEBRATION OF HER DIRECTOR’S BIRTHDAY was last modified: February 16th, 2021 by Reporter