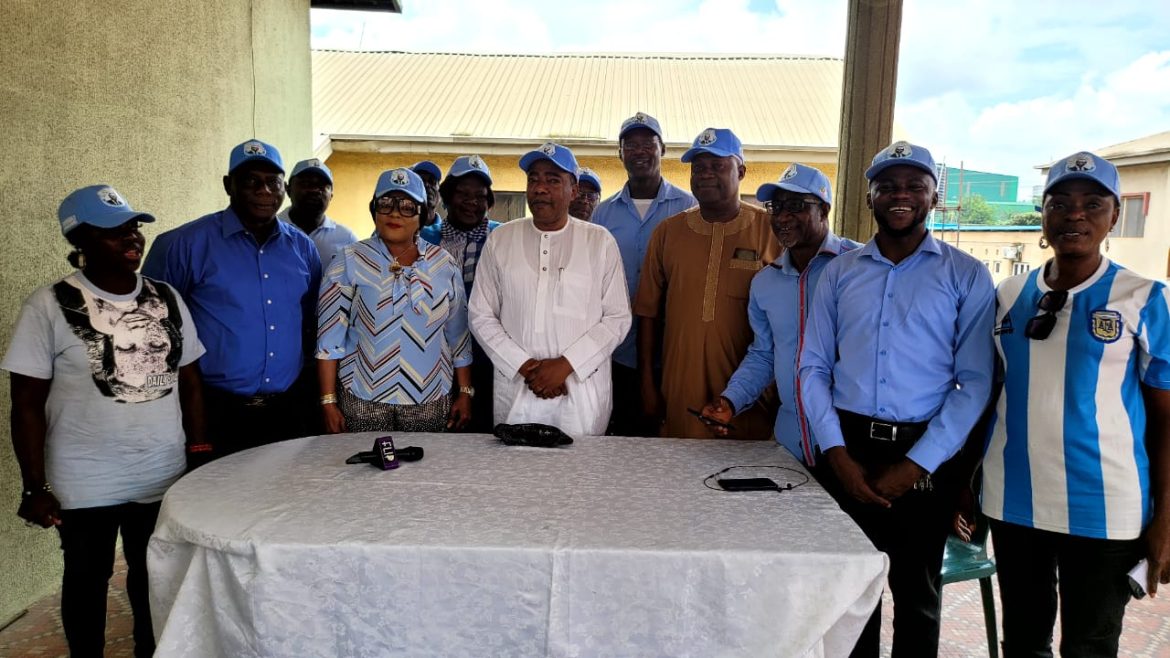 As part of the activities lined up for sensitisation of Lagosians on Governor Babajide Olusola Sawo-Olu’s re-election for 2nd term, members of Sanwo-Olu Ambassadors paid a sensitisation call on the Honourable Senator Ganiyu Olanrewaju Solomon GOS at his Shangisha residence on Tuesday, 20th September 2022.

The entourage was ably led by its Director General, Amb Hajia Tai Elemesho-Okesanjo and the State Coordinator of the group, Amb Otunba Hammed Gafar as well as other State EXCO members and some LGA/LCDA Coordinators, and they were well received by the Honourable Senator Ganiyu Olanrewaju Solomon (GOS).

In her introductory remarks, the Amb Hajia Tai Elemesho-Okesanjo informed Senator Ganiyu Solomon of the commitment of the group to ensuring the re-election of its principal, Governor Babajide Olusola Sanwo-Olu for the second term as Lagos State Chief Administrative Officer. She also reiterated the fact that the group is also committed to seeing to the emergence of Asiwaju Bola Ahmed Tinubu as the next president of the country. While noting that the electioneering campaign was yet to commence, the DG emphatically mentioned that the Door-To-Door Sensitisation calls are being embarked upon to mainly sensitise the larger public so as to lead the campaign activities down to the grassroots. She enjoined the Honourable Senator not to relent in his massive support for the ruling party in Lagos, the APC.

While supporting the Director General in her presentation, the State Coordinator of the group informed Senator GOS that the group activities have always been in tandem with the THEMES Agenda of the governor. He highlighted some of the activities which included the Health Diagnosis/Talk given to over 100 Lagosians from 20 LGAs of the State. He corroborated the DG’s statement of a massive support base by stating that the membership strength of the group is over 25,000 and still growing in the State.

While thanking, Senator GOS for the opportunity of the visit, the DG used the avenue to specially invite him to the group’s upcoming activity, the LAGOS PRAYS event coming up on Wednesday, 5th October 2022. She reiterated that the planned program is aimed at praying for the success of all APC candidates in the forthcoming elections.

Responding, Senator GOS expressed his deep-rooted appreciation for the call. He maintained that the strategic thinking of the group can best be described as pacesetting in electioneering events preceding the 2023 elections. He urged the group not to relent in its efforts at selling Mr. Governor to the larger public. He also called for the strong need to campaign for all the candidates of our party, the APC, across the State. While describing Asiwaju Bola Ahmed Tinubu as the authentic national leader of the APC, Senator GOS recalled how the presidential candidate of the party in the upcoming election formed the party as a result of his selfless leadership acumen. Thus, Senator GOS called on all party men and women to continue selling the good works and bridge-building efforts of the party’s Standard bearer without looking back. The Senator promised to attend the LAGOS PRAYS program of the group on the scheduled date.

Why We Are Different From Other Real Estate Developers