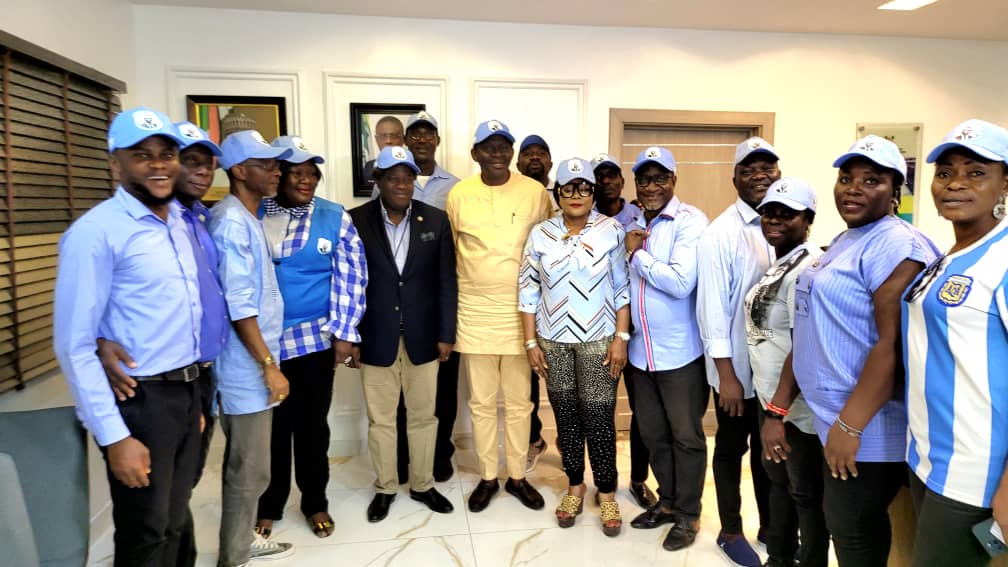 On Tuesday, 20th September 2022 members of the Sanwo-Olu Ambassadors, a pro-Sanwo Olu group in Lagos as led by its Director General, Amb. (Hajia) Tai Elemesho-Okesanjo took the Door-To-Door Sensitisation Visit to the newly appointed Commissioner for Physical Planning And Urban Development, Hon. Omotayo Bamgbose-Martins in his Alausa Office.

The very amiable Commissioner displayed the highest degree of Omoluwabi culture by breaking protocols to gladly receive the delegation amidst his very tight schedule. To receive the delegates, the honourable commissioner was in company of the Special Adviser, Dr. Olajide Abiodun Babatunde.

While introducing the mission of the group, the Director General, Amb. (Hajia) Tai Elemesho-Okesanjo, recounted the good works of its principal, Governor Babajide Olusola Sanwo-Olu as the endearing factors which attracted the members to come together to propagate his achievements and sensitize the electorates for his re-election for 2nd term as the Governor of Lagos State. She added that the solid developmental plans laid by Asiwaju Bola Ahmed Tinubu in Lagos State make it expedient for us to also campaign for him in order to become the next president of Nigeria come 2023.

In his introductory remarks, the State Coordinator, Amb (Otunba) Hammed Gafar informed the Honourable Commissioner that the Door-To-Door Sensitisation call was developed as a result of strategic thinking to place the group ahead in the campaign activities without breaching any electoral law. He stated that the group has been involving itself in activities that are in tandem with the THEMES Agenda of the Governor. He stated that the group, whose membership base is well over 25,000 across the state recently inaugurated its LGA/LCDA Coordinators and members of their EXCO as a means of taking the campaigns to the grassroots noting that its goal is to make an emphatic statement with the landslide victory of the Governor that hard-work is essentially rewarding.
Conclusively, the DG informed the Honourable Commissioner that its group next program themed LAGOS PRAY would be coming up on Wednesday, 5th October 2022. She reiterated that the group’s belief is that the efficacy of prayers cannot be overemphasized hence organising the event for delivering hitch-free electioneering campaigns, and for all the candidates of the ruling party APC including Mr. Achievements Governor and Asiwaju Bola Ahmed Tinubu to record landslide victories in their election bids.

Honourable Commissioner Bamgbose-Martins expressed deep appreciation for the untiring efforts of the group for resolutely sensitizing Lagosians for the good works of the Governor in relation to his THEMES Agenda. He urged the group not to relent in its selling activities to the public by intensifying its sensitisation efforts. The Commissioner assured members of the group of appreciative sense of the governor and his cabinet members noting that winning the re-election bid of the governor on a landslide scale would be highly appreciated.
The Honourable Commissioner concluded by re-expressing his confidence in the abilities of the governor and Asiwaju in delivering unparalleled positive dividends of democracy to the people of Lagos in particular and Nigerians in general.