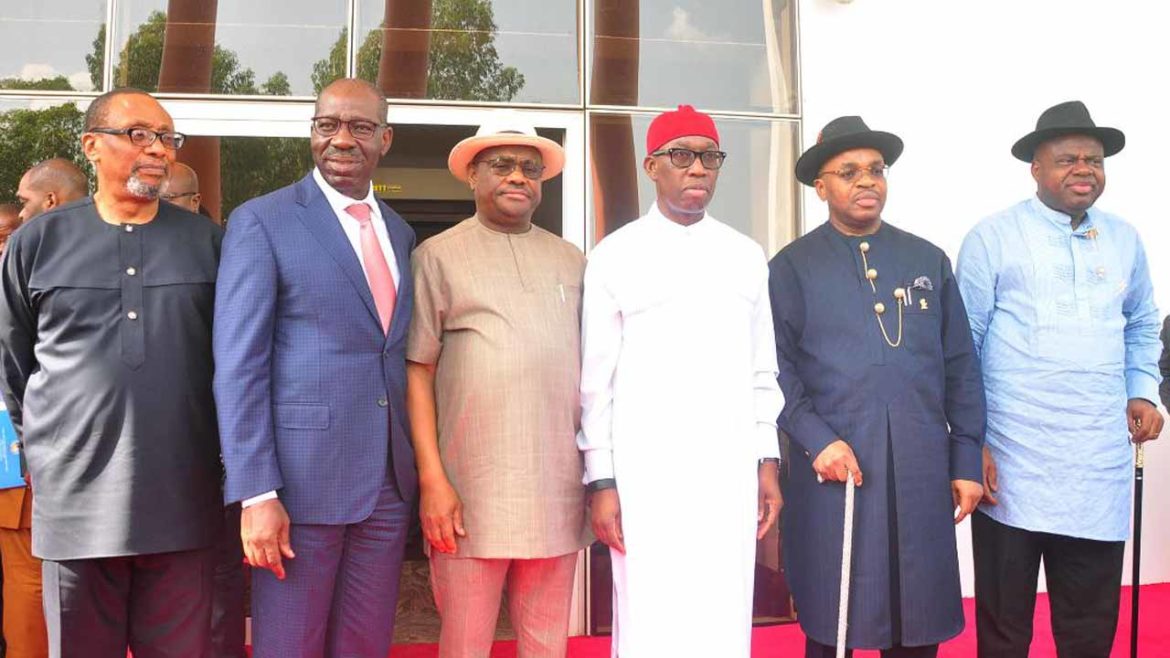 The South-South Governors Forum on Thursday resolved to set up a regional security outfit and revive the BRACE Commission to tackle developmental issues.

Delta State Governor Ifeanyi Okowa who is the forum’s chairman said that he and his colleagues who met in Asaba agreed that there was a need for a regional security outfit.

At the meeting were the governors of Edo, Bayelsa, Rivers and Akwa Ibom states. They mandated the BRACE Commission to work out details of the security outfit.

While addressing State House correspondents after the stormy meeting that lasted for close to three hours, Okowa said that they had also resolved to engage the presidency on the issue of the abandoned 13 per cent derivation. And the percentage will, henceforth, be set aside for the oil-producing states as enshrined in the constitution, before allocations to all the states by the Federal Account Allocation Committee (FAAC).

According to him, “Five out of the six state governors of the Sout-South geopolitical region have just finished with our South-South Form’s meeting, where far-reaching decisions were taken. Our colleague the governor of Akwa Ibom was held up in Abuja, so he could not make it. We had a very enriching meeting and a decision was taken concerning the BRACE Commission, which was started about 10 years ago by our colleagues, who were governors before us.

“We have agreed to restart the BRACE Commission and ensure we provide the necessary logistics for it to function properly. The commission as established was to help us look into the issues of the regional economy and the need for us to develop our region collectively, instead of working as individual states,” he further said.

He continued: “A lot has been done in terms of documentation in the past. And in the last five years, the commission has almost gone to sleep. But we have agreed we have to restart it with headquarters in Port Harcourt, Rivers State, with our next meeting coming up in May, in Port Harcourt.

“We also took other decisions concerning the issue of FAAC allocations and the need to be able to stress very importantly that in every allocation that is being done, 13 per cent derivation must first be taken out from the funds that come from the oil economy before the rest of the money is shared at FAAC. The 13 per cent is meant for oil-producing states. That has not been the situation for a very long time. We have agreed as governors to take up the matter at the appropriate levels.

Okowa added: “We have also looked at the issues of the NDDC and the need to urge Mr. President to constitute the governing board by the advisory board of the NDDC, which has a major role to play in advisory capacity, because we believe there is a lot for NDDC to do in terms of regional projects, rather than taking on small projects. This we have to work on as quickly as possible.”

Prof Maurice Iwu To Be Tried In Lagos, Not Abuja – Judge