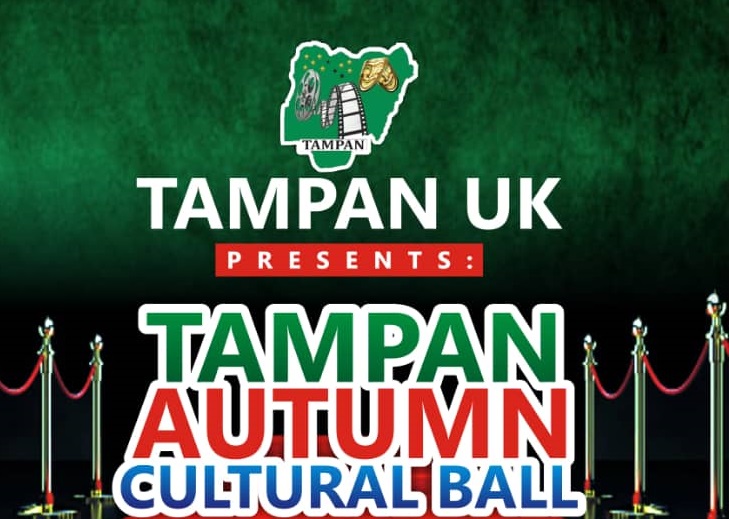 There is this movie event that is set to rock London. It promises to be big and classy.
The event is the inauguration of the First Executive members of TAMPAN UK Chapter. This programme when held shall give credibility and enhance the status of TAMPAN as an association here in the United Kingdom.

It will also give huge exposition to the work of thespians in the diaspora, like the UK who are striving to inculcate in our youths the noble values of Naija heritage, through films and theatrical performances.

It will also serve as an avenue to showcase the diversity of its membership. UK Chapter of TAMPAN is made up of Nigerians and people from other African countries and Europe who have embraced the ideals of Nollywood and have become part of the broader TAMPAN family.

Since the events shall be greatly attended by star actors like the President of TAMPAN, Otunba Bolaji Amusan Latin, the legendary Adebayo Salami and Prince Jide Kosoko, Lateef and MoBimpe Adedimeji, Rykardo Agbor, Yemi Amodu and so on, many Naija people in the diaspora that will also attend the very August event will be thrilled by the appearance of these star actors.
They have only seen them on screen, now they will have the opportunity to meet and familiarise themselves with them.

TAMPAN UK is duly registered with the Government of the United Kingdom.It has a membership strength that is quite impressive. Since 2019 when TAMPAN UK, was founded it has gathered over 70 active members and held elections to all posts, according to the Constitution of TAMPAN Global, under which it operates as an association.

TAMPAN UK is led by beautiful diva, Doyin Amodu who is the President, and Executive Vice President of TAMPAN Global. She is a First Class Graduate of Film Practice from London South Bank University (LSBU). She majored in Producing and Directing.

Stay tuned for more information as Citypeople is one of the official partners of the event.

Doyin Amodu is a man in a woman’s flesh. A genius and an indefatigable defender of people’s rights.

She also worked as a Production Manager with Femi Adewale on very popular Television series and serial dramas produced for Galaxy TV before traveling abroad for further education.