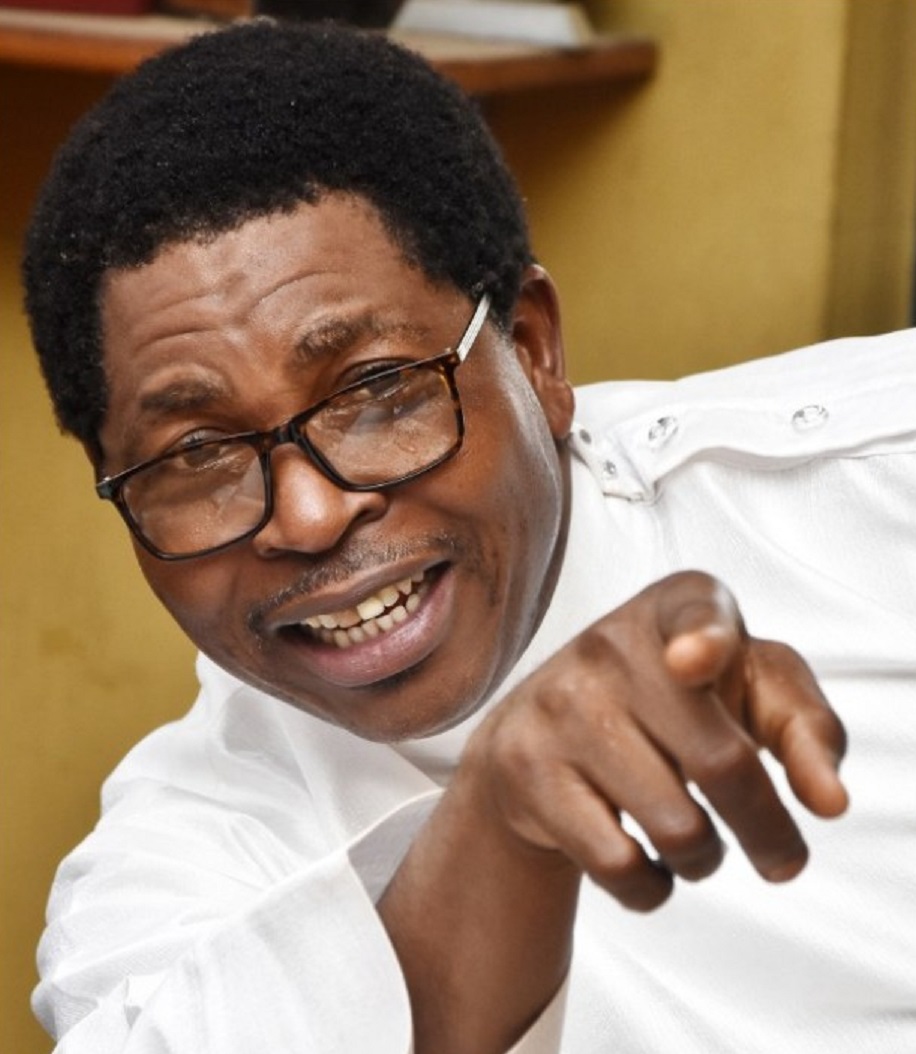 •By Accepting To Preach At DEEPER LIFE Church GBAGADA

Not many people know that before he died in 1985, Papa SBJ Oshoffa who founded Celestial Church of Christ in 1947 embraced other churches. He was always willing to attend their church activities whenever they invited him. He too was always willing to have them attend his own activities, despite the hostilities he sometimes received from them.

At that time, Pastor S.B.J. Oshoffa was the older of the 2 men of God. But Oshoffa had tremendous respect for Pastor William Folorunso Kumuyi, the founder and General Superintendent of the Deeper Christian Life Ministry at his Gbagada Church.

Kumuyi has an impressive academic profile. He was a brilliant teacher of the word and was a genius in Mathematics. Lets tell you a little about Kumuyi.

Kumuyi was born into a Christian family in Orunwa, Ogun State, completed his secondary school education in 1961 at Mayflower School in Ikenne, Ogun State, from where he proceeded to the University of Ibadan and in 1967 graduated with a First-Class honours degree in Mathematics, and he graduated as Overall Best Graduating Student in that year. He subsequently took a post-graduate course in Education at the University of Lagos. He became a born-again Christian in April 1964.

On his upbringing, Kumuyi was quoted to have said, “We would get up in the morning, read the Bible, sing hymns, and go to church regularly. When I went to secondary school I lost interest in the church because our principal taught us atheism. But after a while, I thought again and started going to various churches in town. Eventually, in 1963, a group of singers and preachers from a Gospel church got permission to come to the school. I understood the Gospel message and was born again on April 5th, 1964. I read John Wesley, Charles Finney, Spurgeon, and lots of other books. I got involved with the Scripture Union, and I grew”.

Kumuyi began teaching Mathematics in 1962 at Mayflower School, his alma mater. He went on, in the early 1970s, to become a lecturer of Mathematics at the University of Lagos.

In 1973, while being a Maths lecturer at the University of Lagos, Kumuyi began a Bible Study Group with 15 students who had come to him for Bible training. This training became the foundation of the Deeper Christian Life Ministry. In 1975, Kumuyi was expelled from the Apostolic Faith Church for preaching on the Baptism of the Holy Spirit. He continued his independent ministry, which in 1982 became the Deeper Life Bible Church. As at 2005, the Christian ministry was said to have over 800,000 affiliates.

The Deeper Christian Life Ministry founded by Kumuyi has the international headquarters of its church in Gbagada, Lagos. The church auditorium at the international headquarters sits up to 30,000 worshippers and has been described by experts as the 4th largest in the world. The auditorium was inaugurated on the 24th of April, 2018; the Vice President of Nigeria, Yemi Osinbajo, attended the inauguration.

Other notable places of worship of his Christian ministry include: the Deeper Life Conference Centre in Ogun State at Kilometre 42, Lagos–Ibadan Expressway and the International Bible Training Centre (IBTC) at Ayobo, Lagos.

With such an impressive profile as a General Overseer of the church, there was no way Baba Oshoffa could turn down the offer of Rev. Kumuyi for Oshoffa to come to his Gbagada Church to preach. So he agreed to go. “One of the reasons my father embraced other men of God was because he needed to show them that the Celestial Church was from God, just like other churches”, explained Sup. Evangelist Tosho Oshoffa.

“The Celestial Church is not a cult. It is not a segregated congregation. No. My father used to say every religion is of God. My father will never condemn any church. He embraced every one.

But the problem we have with other churches is that they see Celestial Church as a threat. That is what is called ILARA in Yoruba. For a Pentecostal Church to invite a Celestial Church to come in Sutana, to come and deliver word, they will feel so threatened because they feel anywhere Cele people get to they have a way of taking away members of their congregation.”

“Look at when Baba Oshoffa accepted to go to Deeper Life to preach, it was at this Gbagada here that Pastor William Kumuyi invited my father. When my father SBJ Oshoffa was alive, one day he  invited my father, SBJ Oshoffa. He came to Ketu to see him. He said Papa, I want you to come to our Church in Gbagada. We want you to come as a Special Guest of Honour to come and deliver a keynote address. They came to invite Papa 3 months before.

I asked my father, why is it that you don’t fast like others? He said to me: What do you call fasting? Fasting is for you to deny yourself of what you like most. And what do we love most in life? Shoe. The most embarassing thing in life is for you to walk in the Street without shoes. That is the most embarassing thing. That is why my father says anytime a Celestial member wears Sutana and walks barefooted, he or she is fasting. That is the meaning. As you are seeing me like this walking bare footed, I am fasting already. When you walk barefooted people will insult you, you will be humilated, the sun will burn you and so on. You are doing it for your God and by your faith, because of your obligation and because of the faith you have in God, because of the doctrine. Everyday that we Celestial Church members wear Sutana and walk barefooted we are fasting. That is why we have the GRACE. We don’t fast for 40 days. We only do just 5 days. That is Celestial Church for you.”

“Let me go back to my story on when Papa Oshoffa visited Rev. Kumuyi at Gbagada. What they thought then was they believe that Celestial Church members do not know Bible and when Oshoffa comes he will come with plenty members and he will use Bible to convert them. That was the strategy. But it didn’t work. Many people kept coming  to meet my father and they said to him: Haa Baba, you are going to Baba Kumuyi’s church. He said Yes, I am going. They came here to invite me and I accepted, so, I am going.

Ok, on the D-day, they came to Ketu to lead Baba with escort to Gbagada, that was in 1981/82. When they got to the church, everywhere was jampacked, everywhere was full. Baba sat down. He was the Chief Guest of Honour. But interestingly, Baba who was the Chief Guest of honour was not allowed to talk. They were just preaching Bible, talking and talking. Okay. After a while, they now announced that the seminar will be closed in about 10 minutes. Baba’s aides were shocked. How can you invite Baba and you won’t let him speak? Someone now came to meet Papa and they told him: they said they will soon finish in 10 minutes, won’t you say something? He now said, call me my Aburo, Pastor Kumuyi. He came promptly and Papa Oshoffa now said, I was told that you will soon finish. So, when am I going to address the people? Give me just one or 2 minutes let me just talk. If they had known, they wouldn’t have allowed Baba. They said Ok, lets listen to Papa SBJ Oshoffa, he wants to say one or 2 things. Baba now stood up.

Once you have Grace, you must carry the Grace. You must manifest it. You don’t need long prayers. It’s a decree. Papa said: Olorun mi. Olorun Kan soso ti ko ke reju. Je ki awon eeyan yi mo, pe iwo lo ran mi ni ise. My God, the only God that has no duplicate. Please, let the whole world know, let this people know, that you sent me”. Come and see how everybody was Holy Spirit filled. Everybody there that day saw the Power and Spirit of God. And the power is still there in the Celestial Church. The power still remains in the Celestial Church. Ogo Cele is there everyday. Members are enjoying it. The difference is that we don’t give Testimonies. We don’t share Testimonies. If Celestial members should be sharing testimonies everyday, the newspapers will be filled everyday. If you hear everything that God keeps doing everyday, you will be amazed. But in Celestial Church there is no room for that.

So, our relationship with other churches is cordial. But there is no way some won’t be jealous and envious. There is no way. If people are not jealous of us, then we are not of Christ.

Many members of other churches are  envious of Celestial Churches.

READ ALSO: OLUGBON OF ORILE IGBON & OLORI NAME TWINS IN THE US

The Day OSHOFFA Shocked Rev. KUMUYI & His Members was last modified: May 18th, 2021 by City People