The Secret Of My 22 Yrs Marriage To RONKE – TAMPAN National President, Mr LATIN 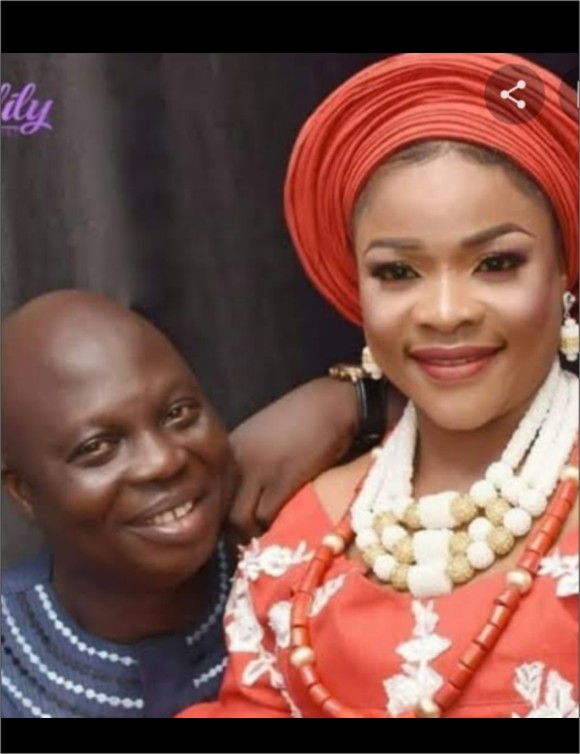 Highly respected veteran actor and President of the Theatre Arts and Motion Pictures Practitioners Association of Nigeria (TAMPAN), Bolaji Amusan, popularly known as Mr Latin is happily married to Mrs Oluronke who is currently based in Ireland.

Just a few days ago, he got a surprise car gift from his wife on his birthday. For those who are not familiar with their love story, we would let you in. The couple got married in 1999 and in one of his interviews, he revealed how they met. According to him “I met her while strolling along the street in front of my office one day at Isabo in Abeokuta, Ogun State. I asked her out but as an actor, she merely laughed off my request. I pestered her for some time and she eventually agreed after two-and-half years and we eventually got married in 1999”. He also disclosed the reason his wife and children are staying abroad. According to him, it was a joint decision the wife being a teacher got bored at home with the consistent strike.

“It was the idea of two of us. There was a long strike by teachers at a time and we thought such would not give our children what we really wanted for them. We decided to relocate but because of the nature of my job, I cannot stay over there with them”.

Mr Latin has remained one of the very veteran actors who have not only kept their marriage intact and devoid of any social media drama but also have not been linked to any actresses in the industry and scandal that could put his marriage at a huge risk. He was spotted at an event a few days ago, where he shared the secret of his 22 years of marriage and the 5 keys to a successful marriage.

When asked what is the secret of his 22 yrs old marriage despite being a celebrity?

I have been happily married for 22 years now. And I will say it’s just God and prayers that have been keeping my marriage for me.

Besides this, we believe in each other. We talk as if we are always together. We talk every hour and I make it a point of duty to always share everything with her. Take, for example, now that I’m here, she is aware. We know basically everything about each other and our movement and that has gone a long way to greatly help our relationship.

Recently, she surprised you with a car on your birthday, how did you feel and did you see that coming?

Honestly, I didn’t see it coming, I was not expecting anything like that. She just called my brother on phone and told him, that he needs to help me get a document somewhere, I was even on location that very day working. So, I saw a car coming towards where we were working. So, colleagues were trying to stop the car because we were shooting, but I told them not to, that probably the gentleman was driving to his house and we needed to be very careful and polite in talking to him. The next thing I observed was that the driver got to where I was standing and got down from the car and my brother started recording everything, I was like, please we are shooting a movie because I thought the car belong to one of his friends who sells cars. I was like am still talking and you are recording, can’t you see you are disturbing us. Then he said your wife said I should give you this car as a gift. I was so surprised that I couldn’t utter a word. I was just saying Ha ha ha I was really surprised, I didn’t contribute a kobo to it and I also didn’t know anything about it.

what special message would you like to say to her now?

She knows I appreciate her greatly and that is just the honest truth.

What would you say are the 5 keys to send successful marriage?

First and foremost dedicate time for your family, and that is the most important thing. Always be open and honest with your partner. Let there be trust, it is also another very vital aspect of every relationship. If she says, she is going somewhere, don’t start doubting her, just trust her and with trust, couples can conquer a lot in every marriage and relationship.

Don’t be stingy to your family, make sure you do your best when you are supposed to, so that the day, you complained you don’t have, they would believe and trust you because you have been a very giving type. As a celebrity, don’t let your fame get into your head and want your family to start treating you as a celebrity too. Once you are wrong apologise and move on. Don’t feel too big or arrogant to do so. Don’t believe you are too big to show love and affection to your family members they are your top priority.

READ ALSO: HOW TO KNOW YOU’RE NOT IN LOVE ANY MORE

How To Know You’re Not In Love Any More