Tinubu, Akande, Osinbajo, Others Have Sold Out On Yoruba Race, Alleges Adebanjo 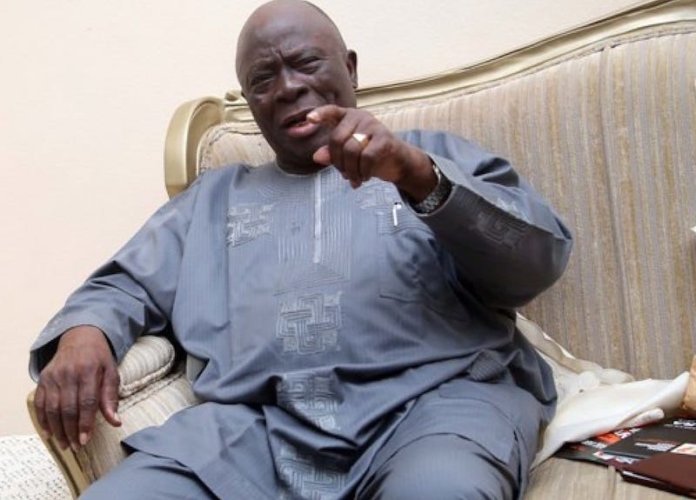 He said Tinubu along with other kinsmen in the APC had abandoned the principle that brought them into political relevance to go into selfish alliance with the President Muhammadu Buhari government in a desperate bid to become president.

“I signed his papers to be governor and the condition on which he was governor was question of sovereign national conference for the structuring of the country back to federalism. That was the mandate on which he was elected in 1999. Call all of them: Tinubu, Osoba they are all sellout of Yoruba race; they have sold out to Buhari all, because they want to be president but that is not my business,” he said.

Adebanjo, who spoke on the ARISE News programme, Morning Show, yesterday, also dismissed the assertion by Akande in his new book, “My Participations”, that the building of his house in Lekki, Lagos State, was bankrolled by Tinubu.

He also accused Tinubu, Akande and other Alliance for Democracy (AD) governors elected in 1999 of reneging on the promise they made to the Yoruba people to insist on the convocation of a Sovereign National Conference and restoration of true federalism.

The elder statesman said: “Telling lies is what I don’t do and I don’t know how a man, who claims that we all came from the root of Obafemi Awolowo can be taking pride in his participation in the government of one Buhari, who they knew to be a disaster, when all those who supported him initially are now condemning and regretting that they supported him.

“No sensible man at this stage would say I am proud of Buhari, it shows the type of person he is. He is too junior to me to be commenting on political matters. The only thing I would like to comment on is giving the details of how I built my house and he gives the details of how he built his own house. That’s all.”

While further reacting to the claim by Akande that Tinubu sponsored the building of house in Lekki, Lagos, Adebanjo said he was to respond by providing details of how he built his home.

“I want to react to specific statements, because different newspapers talked about different things and I am just gathering them to respond at once but of all the comments, the only one I intend to respond to fully is on Tinubu buying my house, and I will give you details of how I built my house. On all others, he is too junior for me to be commenting on political matters.

“He is a political neophyte. He is already known to be a pathological liar and his colleague Akinfenwa, in his book, said that is who he is and those of us, who didn’t know him also know. He is just an apron string of Tinubu,” he said

Tinubu, Akande, Osinbajo, Others Have Sold Out On Yoruba Race, Alleges Adebanjo was last modified: December 15th, 2021 by Reporter

AT THE SERVICE OF SONGS FOR HON. KEHINDE BAMIGBETAN’S WIFE, FATIMAH IN LAGOS