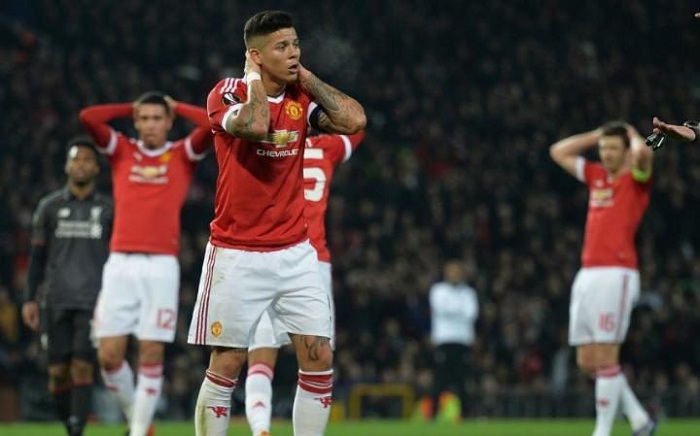 Manchester United captain Wayne Rooney has been ruled out of the FA Cup quarter-final at Chelsea, leaving his side without a recognised striker.
Rooney collided with Phil Jones in training and misses out with a leg injury, while Zlatan Ibrahimovic begins a three-game ban for elbowing Bournemouth’s Tyrone Mings.
Forwards Anthony Martial and Marcus Rashford [illness] are also missing.
Chelsea coach Antonio Conte has a fully-fit squad at his disposal.
The precise nature and severity of the leg injury Rooney has sustained is not known but the England captain was unable to complete the training session and will have a scan on Monday.
No blame has been attached to Jones for the incident in what has been described as a “full-bloodied session”.
It had been expected that Rooney, 31, was going to be involved because he did not go to Russia for the Europa League last-16 meeting with FC Rostov on Thursday.
Rooney was expected to be named in Gareth Southgate’s England squad on Thursday for the friendly against Germany on 22 March and World Cup qualifier against Lithuania at Wembley on 26 March.
He became United’s record goalscorer in January, eclipsing Sir Bobby Charlton, but has played only once since 1 February and last month turned down offers to move to China in order to complete the season at Old Trafford.
Meanwhile, Chelsea boss Antonio Conte said “In October, before the game [won 4-0 by Chelsea], I was sure of facing a great team. It’s the same now. Manchester United have, together with [Manchester] City, the best squad in the league.
“We have a good identity. We are showing good football, but for sure it will be a really tough game against a good team.
“I hope to be favourites, but to show this on the pitch, not only in the words. The facts are on the pitch. We must talk during the game on the pitch, not before. I prefer to focus on the game, and my players to speak with facts.”
His Manchester United counterpart, Jose Mourinho opined: “We cannot go with Nicky Butt’s team [ie players from the under-23 team, managed by Butt]. Manchester United is too big. Manchester United is the winner of the competition.
“It is not Chelsea’s fault that we were given this Monday match, so we have to make changes for sure… but we cannot go to Stamford Bridge with a Nicky Butt team.”
In conclusion, commentator Guy Mowbray said: “Antonio Conte made nine changes for rounds three and four, and then seven for the fifth round at Wolves, but I’d be surprised if there were more than a couple for this one – if any.
“There’s a five day gap before Chelsea’s next game, and with players already talking of ‘the double’, why risk breaking the rhythm?
“United’s heavier fixture load makes Jose Mourinho’s selection plans less clear, as does the depth of a squad that Conte has – quite rightly – spoken of as being the Premier League’s strongest.
“Whoever replaces Ibrahimovic as striker has reason to shine – but not as strong as Mourinho’s reason to win. Revenge? No – it’s surely natural.”