Why The Ijesha People Don’t Joke With OGEDENGBE 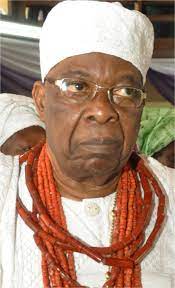 Role played by a man in the life of his people could make him a hero, who would never be forgotten as long as his ethnic group is extant. To attain this level of recognition the person must have carried out an act that is unprecedented and beneficial to the people, which makes him unforgettable.

Orisarayibi Ogundamola, popularly called Ogedengbe by his contemporaries, was a war hero who the Ijesha people can’t forget in hurry.

A praise song in honour of the war hero, Ogedengbe, even attests to the high pesdestal on which he is placed in the scheme of things by his people in Ilesha. Ogedengbe agbogun gboro eru jeje ni gbogbo ile kile. Literally saying that Ogedengbe was a fearsome warrior, who was a terror to the enemies of Ijesha. Ogedengbe fought the cause of his people, providing them a formidable rampart that was impregnable.

Early in life, as a youth, he manifested traits of youthful exuberance in activities that were stepped in strength-testing, which mostly lure those who could be described as tough boys. It was not a surprise that his contemporaries whom he regarded as mum’s pets feared him. Mostly, they kept their distance away from him. He was regarded too troublesome to be their play mate.

It was not a surprise that his unusual activities that bordered on violence could not be ignored by those who were older than him and even by the elders in the community. Ogedengbe was really loud and deep in violence that was repugnant to social peace in Ilesha. Classed with those regarded as wild boys, his loosed-footed escapades made him to always run foul of social norms.

A lawless gangster quickly sprouted to life and became a leech on the social fabric of Ilesha. That was why Ogedengbe and his mates were regarded a menace by the Chief of Ilesha at the time, Chief Odole, who resolved to do everything in his power to rein them in or send them to exile.

Parents of Ogedengbe, Apasan Borijiwa and Juola Orisatomi’s moral situation was too soft to have any effect on their child and could, therefore, be said to be frustrated. They were not, however, hopeless. They believed that Ogundamola would soon turn a new leaf that would be a child of pride to them and the society at large. Their hope was based, as it were, on a perdiction, a few months before Ogedengbe was born. An Ifa priest had told his parents that a liberator for Ilesha and neighbouring towns was on his way to mother earth.

When the threat of Ogedengbe and members of his group to Ilesha peace became unbearable to residents and chiefs alike, Chief Odole had no choice, but exile them from their home town.

Those boys who in today’s term could be called area boys found their ways to Ibadan a budding town that was on its path to become a principality after the fall of Oyo Empire. Ibadan was the ideal town that could provide this group of Ilesha strong boys a space to accommodate their war-like traits and instinct. They got to Ibadan and were not disappointed. They became ready tools in the hands of wardlords in Ibadan who were eager to bring in bold, strong and brave boys to reinforce Ibadan army in the 1820’s.

Ogedengbe became a rookie in the house of Bada Aki Iko, a reknowned war General in Ibadan. It was in the ranks of Bada’s troops that Ogedengbe learnt the ABC of Warfare. He was notorious for participating in raiding and kidnapping of Ijesha people. Thus, bringing them to slavery in Ibadan despite that they were his people. This was soon changed as Ogedengbe returned to Ilesha and participated in laying siege to Igbajo against Ibadan. Unfortunately for him, Ibadan army overran Ilesha troops and captured Ogedengbe.

He was brought to Ibadan and charged with treason.

He was charged with colluding with rebels against the town of his adoption, Ibadan, that had in no small way been beneficial to him.

Balogun Ogunmola, an Ibadan warlord, convicted Ogedengbe and condemned him to death. He was already slated for execution when Latosa, another warlord in Ibadan and others interceded, without being prompted, on behalf of Ogedengbe. That was how Ogedengbe’s life was spared.

Ogunmola, however, told those who pleaded on behalf of Ogedengbe that there was a need to not let Ogedengbe forget the heinious crime he had committed against Ibadan.

He ordered that Ogedengbe be given a mark across his nose. That mark was a stigma that was difficult for Ogedengbe to forget till he died. It was to remind him that perfidy does not pay. On that occasion, Ogunmola said that his Ifa priest had told him that the boy whose face was being disfigured was destined to be a great man, adding that he would cause Ibadan many troubles in future.

Ogedengbe later escaped from Ibadan to Ilesha. He quickly pooled men who had escaped to Ilesha after their defeat at Igbajo. With those, who could be described as his Igbajo invaders, he started a war of conspiracy against Chief Odole, who had earlier warned them not to embark on the attack on Igbajo. Civil uprising against Odole ensued and put an end to Odole’s reign in Ilesha.

Despite that Ogedengbe was not unaware of Ibadan military strength, he again went into war against Ibadan after the death of Basorun Ogunmola. Towards the end of 1868, Ibadan troops and Ilesha army clashed at Ibala. Ibadan routed the Ilesha soldiers as they were driven to Afara Jegede. The Ogedengbe-led Ilesha army had their wings clipped by Ibadan fighting force who laid siege to Ilesha. This led to hunger, which claimed many Ijesha people’s lives. The Ibadan siege was unbreakable. That was why Ogedengbe and his henchmen were forced to negotiable a truce with the Ibadan warlords before the siege was lifted.

At that point in time, Ogedengbe had emerged the recognised military leader in Ilesha. His popularity as a military strategist had spread to Ekitiland, which made him more popular.

Thus he brought recognition and respect to Ijesha people especially in the Kiriji war that had no decisive winner between Ibadan and Ekitiparapo forces.

Why The Ijesha People Don’t Joke With OGEDENGBE was last modified: November 22nd, 2022 by City People