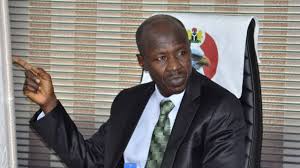 Chairman, Economic and Financial Crimes Committee, Mr. Ibrahim Magu, yesterday said the commission has discovered new tactics being used by corrupt politicians and bank officials to loot public treasury.
Magu, said that the new tactics were being used by looters of the nation’s commonwealth to escape the long arm of the law.

He made the disclosure in a solidarity message at the 12 National Delegates’ Conference of the Nigeria Labour Congress yesterday in Abuja.
The EFCC chairman was represented by Dr Aminu Gusau, a Director in the commission.

Magu said the EFCC made the discovery through various investigations, which had unearthed the collusion of bank officials and those of non-designated financial institutions, with corrupt politicians in the country.
He added that, this had brought about an increase in the instances of illicit financial flows into and out of the country.

Magu said that he was in Ghana as part of the commission’s concerted effort at beaming high-tension searchlight beyond the borders of Nigeria.
‘‘What we discovered is no doubt staggering and mind-boggling,’’ he said.
He said that corrupt politicians had widened the circles of their corrupt activities by investing their loots in other African countries. This is in order to sell them and deploy ways of repatriating them to Nigeria, even in the buildup to the election.
‘‘But, by and by, we are also stepping up our game to combat and nip in the bud, new tactics being deployed to fraudulently divert and misappropriate funds meant for the welfare and good of all Nigerians.

‘‘We have signed a Memorandum of Understanding with the Economic and Organised Crime Office, in Ghana, the Ghana Financial Intelligence Centre and the Ghana police service to ensure that we keep track of such illicit inflow and outflow of suspicious funds.
‘‘Our MoU with the United Arab Emirates is also very much in effect as we have been able to trace several assets illegally kept there.

‘‘This is in addition to several other strategies that we have deployed in carrying out our mandate of ridding Nigeria of corruption. We remain unrelenting, undaunted and unbowed.

‘‘We have also engaged with operators of financial institutions, as well as non-financial institutions and we charge them to see themselves as partners in the fight for the common good of all Nigerians,’’ he said.
The chairman said that the commission was monitoring the movements of cash in the system, and awake to its responsibility of ensuring that the provisions of the Electoral Act, 2010 are strictly adhered to.

‘‘This was especially as it relates to election funding, and the now worrisome incidents of vote buying,’’ he said.
‘‘ Invariably, one major purpose why I am here is to further goad the NLC to cooperate with the EFCC in the fight against corruption.
‘‘The task of fighting corruption is a collective responsibility that has been given to each and every one of us,” he added.
The EFCC boss lamented that the more the commission moved to address corruption, the more those involved devised new strategies.

‘‘We have realised that the more we spread our tentacles to catch and bring to book those who have corruptly enriched themselves from the commonwealth, the more we are discovering that the corrupt-minded folks are evolving new techniques.’’
According to Magu, the commission had put in place several strategies that would be deployed in carrying out its mandate to rid Nigeria of corruption.
He noted that the NLC has been a longstanding partner of the EFCC.

‘‘You have partnered with us at various events like anti-corruption walks, among other interactive fora, strategically designed by the EFCC to strengthen partnership with critical stakeholders to fight against corruption.

‘‘These collaborations with labour and other civil society groups are hinged on the realisation that the EFCC cannot single-handedly confront the monster that corruption has become in our society.
‘‘It is a fact of life, that a single finger cannot lift the load off the ground; such effort requires the use of all the fingers of the two hands to achieve such an action.

‘‘However, with your support and the goodwill of all Nigerians, our painstaking and broad-based approach will definitely yield results.’’
The theme of the two-day National Delegates’ Conference is: ‘‘Towards a Decade of Activism for the Promotion of Labour Unity, National Rebirth and Development.’’

The EFCC boss, while speaking on the theme of the conference, said the dream of ensuring a national rebirth and development of the Nigerian economy and the country’s image in the international community was not a day’s affair.

‘‘We have a collective responsibility in uniting against corruption; with unity of purpose, we shall attain in our lifetime, the future that we desire for the generation yet unborn.’’