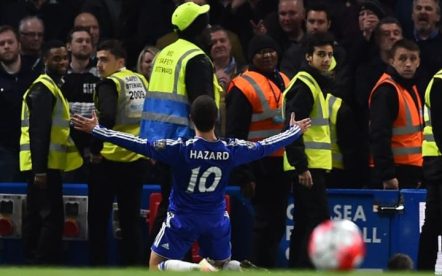 Chelsea will only agree to negotiate a deal with Real Madrid for their star player Eden Hazard if Los Blancos can fulfil a condition.
The Blues has reportedly demanding Real Madrid Marco Asensio as part of an offer that would see Hazard join the La Liga Champions.

Hazard has discovered his best form under Antonio Conte by scoring 16 goals to fire Chelsea to the Premier League title and also to the final of FA Cup.

Real Madrid is capable of luring best players in the past and has previously raided the Premier League finest in time past.

But Chelsea is reportedly reluctant to let them sign Hazard without them benefitting from the deal in some way.

Spanish outlet Don Balon claims the Blues want Asensio included as part of a deal that would see the Belgium international move to Spain.

Asensio is billed as one of the future stars of Real Madrid, the attacking midfielder has scored nine goals from 37 appearances after his loan spell at Espanyol last season.

Chelsea wants Real striker Alvaro Morata to replace Diego Costa, but the Blues would rather buy him outright instead of him being part of a deal for Hazard.

However, the report adds that Real have categorically told Chelsea that they will not let Asensio go.

Chelsea is also keen to have Lucas Vazquez but Real Madrid is unwilling to let their young stars leave for Stamford Bridge.

Chelsea Gives Real Madrid condition for Hazard’s deal was last modified: May 24th, 2017 by Arinze Ago

Moji Olaiya: ‘Whatever you want to push out, ensure it has common sense’ – Yomi Fabiyi claps back at Yomi Fash-Lanso